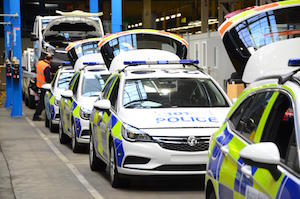 UK – Claimed to be the largest of its kind in Europe, the factory at Luton in Bedfordshire will convert 2,500 cars and vans per year into vehicles for the police, fire and ambulance services. Production has been transferred from nearby Millbrook.

The Vauxhall models to be converted include the Corsa, Astra and Insignia cars plus commercial vehicles such as the Combo, Movano and Luton-built Vivaro. All production processes will be completed in-house, providing “a one-stop shop purchasing experience to UK emergency services”, according to Dick Ellam, Vauxhall’s manager, Special Vehicles.

The new facility has created 50 jobs and local suppliers have also benefited from the extra business, including Border Engineering in Luton, which makes brackets, and AV Engineering in Royston, which produces fascia mouldings. Vauxhall says that 90% of the materials needed to convert the vehicles into police cars will be sourced in the UK.