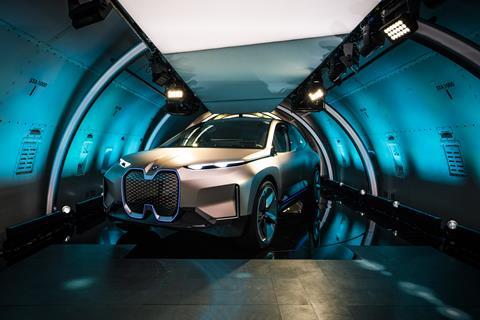 CFRP pioneer BMW signed an agreement with carbon-fibre manufacturer SGL Carbon to supply a range of components in its upcoming EV, the iNEXT

In a recent report, analysts from IHS Markit predicted that electric vehicles will account for more than 30% of new cars sold in key automotive markets by 2040 – up from just 1% of new car sales in 2016. What place does carbon fibre-reinforced plastic (CFRP) have in this electric future? In recent years, this strong, stiff and lightweight composite has started to see use in mainstream vehicles, such as BMW’s 7 Series and Audi’s A8, as carmakers look to meet increasingly stringent global regulations on fuel efficiency and carbon dioxide emissions.

In the short term at least, it seems OEMs will also need to minimise the weight of their EVs. Consumers are used to achieving ranges of a few hundred kilometres from conventional internal combustion engine-powered vehicles. To achieve a comparable range from an EV, a very large, expensive and heavy battery pack is required, the weight of which needs to be offset if a mass spiral – increased secondary mass effects such as larger brakes – is to be avoided. At least at the premium end of the EV market, it seems that CFRPs could play a key role here.

The first vehicle from Volvo’s performance electric vehicle company, Polestar, will feature extensive use of CFRP – marking the first time the Swedish carmaker has employed the composite in earnest. CFRP will feature in the Polestar 1’s bonnet, boot lid, side panels, doors and the entire roof structure, and enables the hybrid-electric vehicle to be 230kg lighter than it would if metals were used for these parts.

The ‘dragonfly’, a component named for its shape, is also made from CFRP and plays an instrumental role in increasing the torsional stiffness at one of the critical points in the body structure, between the middle of the floor and rear construction. Christian Samson, head of product creation at Polestar, explains: “When you combine this strengthened framework with the super-strong body and roof structure, you get a stiff and communicative chassis, which translates driver input into superb driving characteristics.” 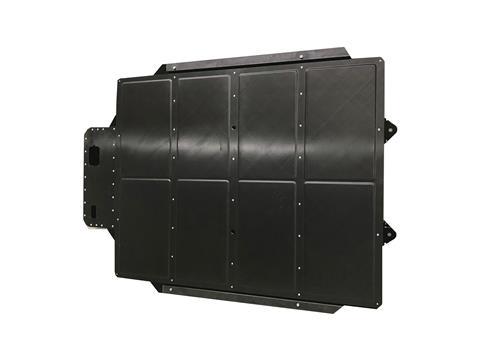 There are significant design benefits as well. The carbon-fibre roof structure is not only thinner and stronger than a steel equivalent, but also allows for a much lower roof line, resulting in a sleek and slender profile. A glass panel stretches the length and width of the roof, integrated with minimal intrusion from body elements on the inside, for a panoramic view.

Jaguar Land Rover, meanwhile, is leading a consortium of UK companies looking to develop cost-effective, scaleable methods for the production of CFRPs with the aim of improving the performance of EVs. The other partners on the £37.6m Project Tucana are Warwick Manufacturing Group, Expert Tooling & Automation, Broetje-Automation, Toray International UK, CCP Gransden and Magna Exteriors.

For its part, CFRP pioneer BMW has recently signed an agreement that will see its long-term partner, carbon-fibre manufacturer SGL Carbon, supply carbon fibres and semi-finished textile products for a range of components in its upcoming EV, the iNEXT. Andreas Wüllner, president of Composites – Fibers & Materials at SGL Carbon, believes the iNEXT will be the second largest EV programme in terms of the total volume of carbon fibre it will require, behind BMW’s i3, over 100,000 of which have been produced since 2013.

The agreement will also see SGL of Wiesbaden supply BMW of Munich with a number of different glass and carbon-fibre fabrics. Delivery is expected to start in 2021 and will continue for the vehicle’s entire production run. Much like those used in the i3, i8 and 7 Series, the carbon fibres will be manufactured at SGL’s plant in Moses Lake, Washington, US, and will be used to produce fabrics at its site in Wackersdorf, Germany.

SGL has also been working with NIO on the development of a prototype CFRP battery enclosure for the Chinese carmaker’s EVs. The pair claim that this enclosure is lightweight, stable and provides a good level of protection, and can be changed – with the battery it houses – at NIO swapping stations in just three minutes. Senior manager of lightweight engineering at the carmaker, Bin Wei, says the use of the battery enclosure could increase the range of its vehicles and helps to ensure that the battery pack demonstrates a high energy density. “Lightweight technology is one of the core elements in NIO’s technology roadmap,” he states. 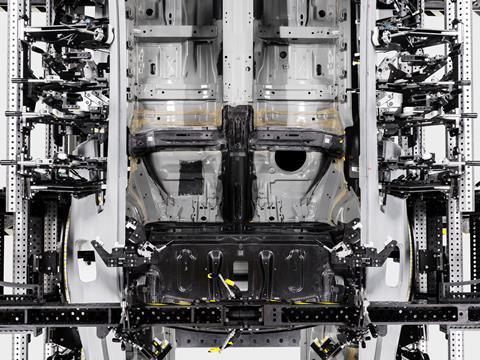 The ‘dragonfly’, a component made from CFRP, increases the torsional stiffness at one of the critical points in the Polestar 1’s body structure

Head of automotive at SGL Carbon’s Composites – Fibers & Materials business unit, Sebastian Grasser, adds: “Commercial battery enclosures for EVs are mainly made of aluminium and steel. In comparison, the CFRP battery enclosure is around 40% lighter.”

The bottom and cover plates of the enclosure are made from cores sandwiched between layers of multiaxial (non-crimp) carbon-fibre fabrics. A rapid curing epoxy and hardener are applied to these fabrics and the resulting lay-up is wet pressed. The resin cures in around three minutes. Recycled carbon fibres can be added to improve the shielding the plates provide from electromagnetic interference.

The tool for the production of these plates was developed at SGL’s Lightweight and Application Center; the carbon fibre at the SGL plants in Moses Lake, US and Muir of Ord, UK; and the multiaxials at the company’s aforementioned facility in Wackersdorf, Germany. Production and assembly of the enclosure took place at SGL’s site in Ried, Austria. SGL expects demand for lightweight battery enclosures from the automotive sector to grow rapidly in the next few years as the production of EVs increases. The company is working with various partners to develop different composite battery enclosures for EV batteries of all sizes and shapes.

Grasser is keen to stress the additional benefits of using CFRP for this application. These include its high stiffness and the reduction in thermal conductivity (approximately 200 times lower) it demonstrates in comparison with aluminium alternatives – helping to protect the battery from extremes of temperature. Furthermore, the composite version is highly water- and gas-proof, and is resistant to corrosion.

The choice of hydrogen fuel-cell vehicles on sale today is limited, with the Toyota Mirai, Honda Clarity and Hyundai Nexo the leading models. But by 2035, Faurecia estimates that 5m vehicles equipped with hydrogen fuel-cell technology could be in production. The company says CFRP is the ideal material for the manufacture of hydrogen storage tanks for these vehicles. As such, it is to create a facility for hydrogen storage systems at its research and development centre in Bavans, France. Faurecia will use the facility to develop lighter high-pressure tanks for fuel-ell vehicles that can be more easily produced than those currently available, and to test these tanks. Due to open in the second quarter of 2020, the facility will cost approximatively €25m to build, and will receive €4.9m in subsidies from the Bourgogne-Franche-Comté region. Faurecia plans to create 50 new jobs at the Bavans site, which currently employs nearly 750 people working on automotive technologies. In May 2017, the company acquired exclusive access to the intellectual property and process know-how for the manufacture of CFRP hydrogen tanks from STELIA Aerospace Composites. Shortly before this, it made an investment in Ad-Venta, a specialist in pressure valves for hydrogen storage.

With improvements in battery technology and infrastructure in the future, it could be possible to fast-charge an EV overnight, trickle charge it wirelessly during journeys and fast-charge it again automatically at its destination. In effect, the vehicle could be continuously charged.

Why then would it need to have a 500km range? Why would a heavy and expensive battery pack be required? Would there still be a need for EVs to be light in weight, and would OEMs be willing to pay a premium for CFRP solely to save a few kilogrammes of mass? Indeed, there is a feeling among suppliers of CFRPs that they must show that they can do things with composites that cannot be done with metals in order to further differentiate themselves from their competition.

In this spirit, researchers at the Fraunhofer Institute for Structural Durability and System Reliability (LBF) in Darmstadt, Germany, have developed a thermally insulating composite housing for EV batteries. The carbon fibre-reinforced thermoplastic (CFRTP) housing, produced as part of the European Union-funded OPTEMUS project, is designed to help keep the battery at its optimum operating temperature in cold weather.

The housing is made of panels comprising a polymer foam core sandwiched between two facesheets made from several layers of 0.25mm-thick unidirectional (UD) CFRTP tape (UDMax from SABIC of Riyadh, Saudi Arabia). The core is injection-moulded using a novel, hybrid in-situ manufacturing process.

LBF says the sandwich panels are stiff, resistant to impact and provide a high degree of protection to the battery from penetration by foreign objects. Using a manufacturing process it has developed, the housing can be produced in two minutes. 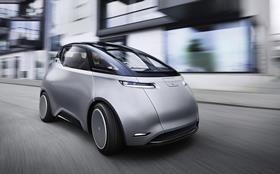 You may be forgiven for thinking that the use of CFRPs will be limited to the use of premium EVs, but a carbon fibre-reinforced thermoplastic chassis developed by KW Special Projects (KWSP) is to be used by Swedish car company Uniti for its affordable EV, the Uniti One. KWSP says that by using a thermoplastic matrix, its chassis, called ToPCaT, can be produced for approaching half (41%) of the cost of conventional CFRP alternatives, due in part to a reduction in tooling costs and cycle times (96% and 83%, respectively).

Furthermore, the chassis is simple to recycle (processes for recycling thermoset-based composites can be complex and energy-intensive). The Uniti One will be produced at an automated production site at Silverstone Park in Towcester, UK. This pilot facility, which will be operational by 2020, will serve as a blueprint for other assembly plants.

Taking this theory to its logical conclusion, researchers at Chalmers University in Gothenburg, Sweden, are using CFRPs not just to protect batteries, but to build them. In their structural lithium-ion batteries, the carbon fibres both stiffen the composite and act as high-capacity cathodes.

The project’s lead researcher, Chalmers Professor of Material and Computational Mechanics Leif Asp, says it will also be possible to use the carbon fibre for other purposes, such as harvesting kinetic energy, for sensors, conductors of electricity, or as conduits for data. If all these functions were part of a car body, its weight could be reduced by up to 50% compared to conventional monofunctional components.

The researchers believe that this gap in charge-storage capacity is because of differences in the crystalline structure of the carbon fibres. HM fibres are made-up of larger crystals that are highly oriented along the fibre direction in a turbostratic structure, which obstructs the intercalation of lithium ions. IM fibres, by contrast, are made-up of small, disordered crystals, and display a lithiation mechanism similar to that of disordered carbons.

For context, IM carbon fibres with good charge-storage capacity are slightly stiffer than steel, whereas HM fibres with poor electrochemical properties demonstrate a little over twice the rigidity of steel.

Asp says: “A slight reduction in stiffness is not a problem for many applications, such as cars. The market is currently dominated by expensive carbon fibre composites whose stiffness is tailored to aircraft use. There is therefore some potential here for carbon fibre manufacturers to extend their use.” He adds that automobiles need to be designed holistically, rather than component-by-component. In such an approach, structural batteries would have several advantages and their use would lead to vehicles that are lighter in weight, and safer.