For the use of composites to increase in the mainstream automotive industry, processes for converting these lightweight and strong materials into parts must be rapid and repeatable. Such processes already exist, and are currently being exploited in the mass-production of composite parts that are not only lighter than their metal counterparts, but come with a wide variety of further benefits too.  SGL Group, for instance, recently celebrated the delivery of its one-millionth glass fibre-reinforced plastic (GFRP) leaf spring to Volvo. The leaf spring is used in the Swedish carmaker’s Scalable Product Architecture (SPA) platform, which forms the basis of the S60, S90, V60, V90 and XC60.

Compared with standard steel leaf springs, which can weigh up to 15kg, the GFRP versions weigh just 6kg – making them around 65% lighter. Senior design engineer at Volvo Cars, Erik Johansson, says this weight saving contributes to lower fuel consumption and reduced carbon dioxide emissions. “In addition, we can use a small number of leaf spring variants in many different models, which increases efficiency and allows for high flexibility,” he states.

The leaf springs are manufactured on a fully automated production line using a high-pressure resin-transfer moulding (HP-RTM) process. Using such a process, preforms made from multiple plies of glass-fibre fabric are packed into a mould cavity, which is then closed and clamped. A catalysed, low-viscosity resin is then pumped into the mould under pressure, displacing the air at the edges, until the mould is filled. After the fill cycle, the cure cycle starts; the mould is heated and the resin polymerises to become a rigid plastic. The process is highly automated, repeatable and can be carried out in minutes.

The resin used for the leaf springs is a polyurethane (PU) from Henkel, called Loctite MAX 2, which cures significantly faster than the epoxy products usually employed in the RTM process. Owing to its low viscosity, the resin penetrates and impregnates the reinforcement more easily and with less fibre displacement, thus enabling short injection times. Henkel says the risk of local overheating and resulting shrinkage is reduced using Loctite MAX 2, as the PU generates less heat overall during curing than epoxy resins. As a result, even thick components with many fibre layers can be cured quickly.

“The new Yuhu SMC pickup box is 30% lighter than a sheet metal pickup box in the same configuration. This is far ahead of our competition in China.”

Despite this success, the matched metal tools required for RTM processes can be very costly and the size of the components it can be used to produce can be limited by the ability to provide sufficient clamping pressure. It can be difficult to achieve certain geometries. The weaving process used to produce the preforms, and the preforming process itself, can still leave large amounts of fibre on the cutting room floor. This is a particular problem if expensive carbon fibres are being used.

In order to keep capital investments to a minimum, it would be beneficial if composites could be dropped into existing processes for conventional high-volume manufacturing. In the world of metals, these processes are stamping, bending or welding, while for plastics, injection or compression moulding processes are commonly used.

Glass fibre-reinforced sheet-moulding compound (SMC) has been used by the automotive industry for decades to produce non-structural parts, such as body panels, quickly and cheaply using compression moulding processes, and new markets and applications for the materials continue to be found.

A glass fibre-reinforced SMC from CSP Victall, for instance, is being used to produce the pickup boxes of Jiangling Motors Corp’s (JMC) Yuhu 3 and Yuhu 5 trucks – the first such use of composites in the Chinese automotive industry. CSP Victall – a Shanghai-based joint venture between Continental Structural Plastics (CSP) of Auburn Hills, Michigan, US, and Qingdao Victall Railway Co. of Qingdao, China – says the pickup box solves the issues of heavy weight, low corrosion resistance and high cost associated with conventional alternatives made from sheet metal.

Chief technical officer of Auto Body at Nanchang-based JMC, Ding Zhiyong, says: “In materials engineering, shaving a single kilogramme per car is a significant accomplishment. Now the new Yuhu SMC pickup box is 30% lighter than a sheet metal pickup box in the same configuration. This is far ahead of our competition in China.” 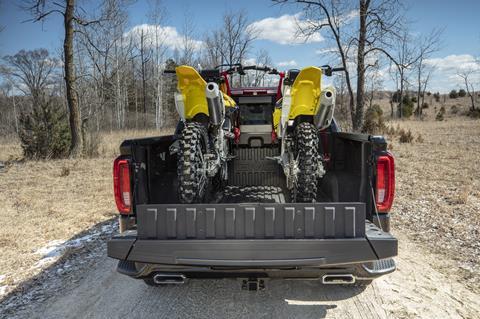 CSP Victall uses a fully automated compounding line to produce its proprietary SMC, which is then loaded into a mould using a robot, compression moulded in a 4300-t press using a vacuum-assisted process, and then cooled to yield a pickup box. The one-step moulding process is designed to reduce cycle time and the number of moulds required.

Injection moulding is a fast, high-volume process perfectly suited to the needs of the mainstream automotive industry. It has been used by Renault and its partners for the manufacture of composite guide rails, which are employed in the rollerblind sunroof module for the panoramic roof system featured on two of its MPVs, the Scenic and Grand Scenic.

The parts were developed by French carmaker, tier one supplier Webasto SC, toolmaker and moulder ARRK-Shapers and resin supplier Polyscope Polymers BV. The use of a glass fibre-reinforced copolymer of styrene maleic anhydride and acrylonitrile butadiene styrene (SMA–ABS, Xiran SGH30EB from Polyscope), rather than extruded aluminium, reduces the weight of the guide rails, simplifies the construction of the sunroof and its installation in vehicles on the assembly line, reduces costs, and – owing to the thinner profile of the final sunroof module – increases headspace in the passenger compartment.

Webasto designed the injection-moulded rails to carry-out a number of functions while reducing part count, assembly operations, and manufacturing time, cost and complexity. Polyscope, meanwhile, optimised the reinforced SMA–ABS to ensure that the finished parts bond well to the polyurethane adhesive used to mount the glass to the module – and the module to the roof structure – and to impart the high dimensional stability critical for the smooth operation of the rollerblind.

Tooling developed by ARRK-Shapers enables eight SMA–ABS composite parts for the sunroof module to be moulded in a family tool. It features modular blocks that allow for both Scenic (five-seater) and Grand Scenic (seven-seater) rails to be moulded in the same tool without the need for costly tooling action (slides) or separate tools. Each rail is moulded in two pieces that are joined using ultrasonic welding after demoulding.

At Renault’s assembly plant, the sunroof system, including the rollerblind, arrives fully assembled and pre-tested as a one-piece unit that is bonded to the roof using robots, eliminating two-to-three assembly steps and allowing an operator to be reassigned. Like aluminium, the composite rails are fully recyclable, but Polyscope says less energy is needed to produce them and to recycle them at the end of vehicle life.

There is now increasing interest in combining injection moulding with compression-based processes. Overmoulding allows manufacturers access to the best of both worlds – the reliability and rapid cycle times of the first process and the high degree of customisation enabled by the second – for the production of selectively reinforced parts.

Such an overmoulding process has been used by Faurecia Automotive Seating to produce lightweight shells for the electronically adjustable rear seats available as an option in Audi’s A8 sedan. These are manufactured from a continuous glass fibre-reinforced polyamide (PA) 6 (Tepex dynalite 102‑RG600(2)/47%), which is overmoulded with a short glass fibre-reinforced PA (Durethan BKV30H2.0), both of which are supplied by Lanxess.

Henrik Plaggenborg is head of Tepex Automotive at Lanxess’ High Performance Materials (HPM) business unit. He says that, owing to the use of glass fibre-reinforced PAs, the shells are around 45% lighter than a comparable metal design. Furthermore, several functions can be integrated into one part, reducing component-count in comparison with metal alternatives, which serves to make the use of composites cost-effective. The shell can also withstand the high mechanical loads experienced in a crash.

Manufacturing conventional metal shells is time-consuming as they consist of numerous individual parts that have to be joined together using multi-step welding processes. A project manager at the Tepex Automotive group of HPM, Tilmann Sontag, says: “In the hybrid moulding process, by contrast, a ready-to-install component is created in a single process step. The pre-contoured and heated semi-finished composite product [Tepex dynalite] is formed directly in the injection moulding tool for this purpose, and equipped with numerous functions by means of injection moulding. This simplifies subsequent assembly and leads to considerable savings in production costs.”

In addition to reinforced ribs, a piping groove for securing the seat cover in place, as well as numerous holders and guides (such as for seat ventilation and cable holders), are integrated into the component. The clips to attach the seat shell are also directly injected. “The shell can be assembled easily and quickly without screws using the clips, and disassembled again for servicing purposes. The clips are highly stable and meet all relevant safety requirements,” continues Sontag. 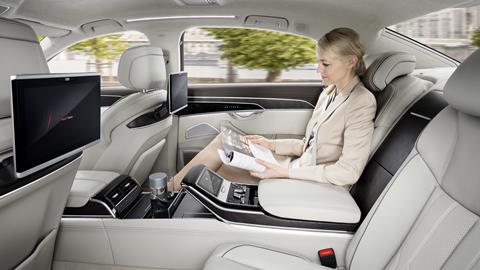 Lanxess supported the development of the seat shells and the complete rear seat system with its HiAnt simulation package. For example, HPM supplied the material data required by Faurecia in order to carry out structural simulations. In addition, several strategies for forming the Tepex material precisely and reproducibly were analysed using draping simulation tools. The findings were incorporated into recommendations for designing the tools and processes. “For example, we recommended special clamping elements to secure the plasticised composite insert in the injection moulding tool,” recalls Sontag.

Lanxess believes Tepex could be used to manufacture backrests and armrests, as well as seat shells, for the complex seat systems likely required for autonomous vehicles. “We are thinking, for example, of freely swivelling or removable seats that not only weigh little, but also meet all crash requirements and are fitted with numerous integrated functions such as seat belts, and infotainment and comfort systems,” says Plaggenborg.

In contrast to thermosets, whose cure reaction cannot be reversed, thermoplastics such as PA harden when cooled yet retain their plasticity; they will re-melt and can be reshaped by reheating them above their processing temperature. This makes them much easier to recycle than thermosets. They also tend to be lighter than thermosets and are highly resistant to impact and stand up well to strain. Further, once melted thermoplastics harden quickly at relatively low temperatures, meaning that reinforced thermoplastic parts could be produced rapidly in short cycle times – especially using compression moulding processes.

Keen to exploit these benefits, OEMs and their suppliers have been working hard to develop methods for the production of structural and semi-structural composite components using these plastics. Now, carbon fibre-reinforced thermoplastics (CFRTPs) from Teijin Ltd are being employed by General Motors to manufacture pickup boxes for selected models of its vehicles. Teijin claims this is the world’s first use of CFRTPs for structural parts in a high-volume production vehicle.

Called Sereebo, the composite is used to compression-mould the inner headboard, side and floor panels of the optional CarbonPro pickup box – developed by Teijin and GM – for the GMC Sierra Denali 1500 and GMC Sierra AT4 1500. Production of the boxes started at the Huntington, Indiana, US-based manufacturing facility of Teijin subsidiary Continental Structural Plastics in early June 2019.

The Sereebo CFRTP used for CarbonPro comprises randomly-orientated, isotropic carbon fibre in a PA matrix, and the part can be moulded in under a minute – significantly quicker than is possible with conventional carbon fibre-reinforced thermosets.

Compared with steel versions, Teijin says CarbonPro 40% lighter, offers 10 times greater impact resistance, is more corrosion-resistant, and is even more readily recyclable. Finally, the flexibility offered by the composite and the process allowed GM engineers to mould-in many of the features of the part, rather than incorporate them as separate components.