The electrification drive has increased the importance of lightweight vehicle structures. AMS looks at the development of the latest aluminium grades for electric vehicle applications 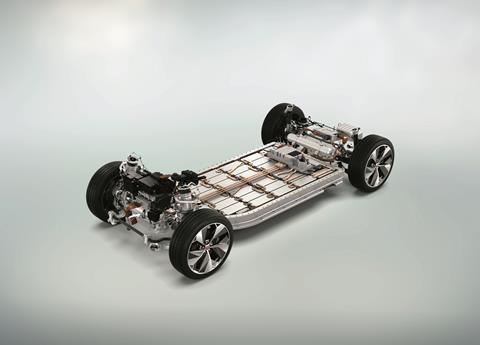 Aluminium in ICE vehicles helped carmakers to reduce the weight of their vehicles, and similar factors will play a part in EVs such as Jaguar’s I-Pace

According to a recent survey of US carmakers undertaken by analyst Ducker Worldwide, aluminium content in cars in North America is to grow from the 180kg (397 pounds) used per vehicle in 2015 to 256kg (565 pounds) per vehicle by 2028. This represents 16% of total vehicle weight, and nearly 25% of vehicles will feature a partial aluminium body-in-white (BIW).

Furthermore, the increase of hybrid and fully electric vehicles (EVs) is expected to lead to a significant increase in the use of aluminium, due to the weight of the high-density lithium-ion batteries and need for protection in the event of a crash. Analysts at consultancy CRU predict that global sales of battery electric (BEV), plug-in hybrid electric (PHEV) and hybrid electric (HEV) vehicles will reach 42m units by 2030, accounting for approximately 30% of the global fleet. In 2017, these vehicles made up just 4%.

CRU research manager Eoin Dinsmore says the use of primary aluminium extrusions and rolled products in these vehicles will be some 25-27% higher than is seen in internal combustion engine (ICE) vehicles today. Indeed, by 2030, demand for aluminium for electric vehicles (EVs) will near 10m tonnes, a ten-fold increase compared with 2017.

The increase in the usage of aluminium in ICE vehicles has been driven by the needs of carmakers to reduce the weight of their vehicles, and similar factors will play a part in EVs.  With ICE vehicles, consumers are used to being able to drive several hundreds of kilometres before they have to refuel. To achieve a comparable range from a single charge of a BEV, a very large, expensive and heavy battery has had to be used, meaning that carmakers have had to cut weight elsewhere in the vehicle. Importantly though, Dinsmore notes that the use of aluminium in these vehicles is also being driven by the development of new applications for which the metal is highly suitable. 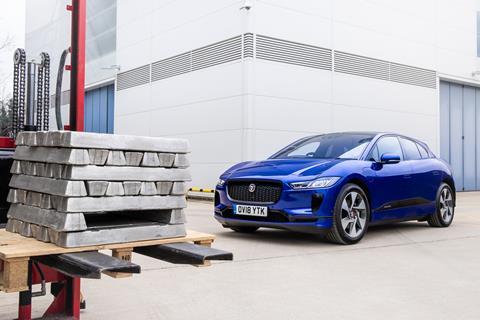 Aluminium producer Novelis, for instance, has developed an aluminium sheet battery enclosure for EVs that it claims is the first of its kind. Built with its Advanz aluminium products, the enclosure is claimed to be up to 50% lighter than an equivalent steel design, helping to extend the range of vehicles to which it is fitted by 6-10% per charge. It can be tailored to accommodate all types of battery cell and would be particularly suitable for use in BEVs with larger power packs, such as pickups, SUVs and crossovers.

Extensive testing has shown that the enclosure will protect batteries from road debris and crash damage. Novelis says the enclosure is cheaper to produce than alternatives made using extrusion and casting processes, and that its alloys enable the production of deep-drawn, complex shapes tailored to specific design requirements. It also exploits the inherent benefits of aluminium, being more corrosion-resistant, easily recyclable and having better thermal conductivity, which helps regulate the temperature of battery cells and increases its lifespan, than steel designs.

Vice-president for automotive at Novelis, Pierre Labat, says: “By providing a product that is stronger than existing aluminium alloys without sacrificing formability, automotive designers and engineers will have even more flexibility to lightweight their cars, trucks and SUVs.”

Novelis is not alone in developing grades of aluminium that balance strength with formability. For instance, Constellium has launched a 6000-series alloy, HSA6, that demonstrates an ultimate tensile strength of over 400 MPa and is suitable for the manufacture of extrusion-based CMS, structural BIW components and battery enclosures. It is formable and, by enabling reductions in the wall thickness of parts, can generate weight savings of 15-30% compared with conventional aluminium alloys. It can also provide 15-30% extra strength to reduce intrusion in the event of a crash.

HSA6 debuted in several 2017 and 2018 model year vehicles, including the Mini Countryman, where it is used in the rear CMS and as an insert in the front CMS in the region of the towing arm, where its strength is needed. 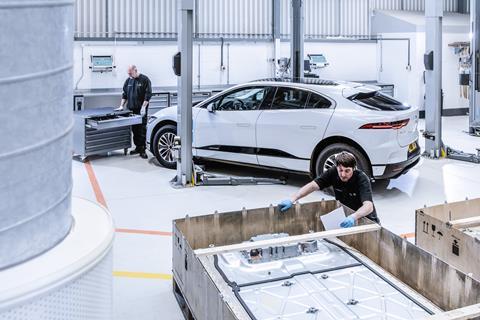 With its REALITY project, JLR aims to recover aluminium from existing vehicles, and reform it into a high-grade aluminium to be used in new vehicle bodies

Another perceived benefit is that aluminium is highly recyclable. Indeed, approximately 75% of the aluminium ever produced is still in use today. This is vital for its use in EVs and conventional vehicles alike, given that EU directives stipulate that 85% by weight of end-of-life vehicles (ELV) must be reused or recycled, with a total material recovery rate of 95%. Furthermore, the production of recycled aluminium consumes only 5% of the energy needed to produce primary aluminium with the same properties, significantly reducing the cost of using the material.

A number of OEMs are currently exploiting these opportunities with closed-loop recycling systems. Jaguar Land Rover (JLR), for instance, currently uses 180,000 tonnes of aluminium per year and is putting systems in place to ensure that as much of this is reused as is possible.

JLR already has already established a closed-loop recycling system for its aluminium manufacturing scrap. Between September 2013 and January 2019, around 300,000 tonnes of such scrap has been incorporated into its vehicles, including the XE. In 2014, the XE became the first vehicle in the world to use aluminium alloy grade RC5754, which is made from up to 75%-by-weight recycled aluminium, for its body panels. Half of the XE’s body structure is fabricated from aluminium alloy grades that contain a significant amount of recycled content.

“By 2030, demand for aluminium for electric vehicles (EVs) will near 10m tonnes, a ten-fold increase compared with 2017.”

Now, through its REALITY project, JLR aims to recover aluminium from existing Jaguar and Land Rover vehicles, and reform it into a high-grade aluminium that can be used in the manufacture of new vehicles.

The process is currently being tested on pre-production Jaguar I-PACE prototypes that have had their batteries safely removed. These batteries are put through a separate recycling process that JLR is developing, while the scrap from the vehicles is sorted using sensor technology supplied by project partner Axion Recycling. Once isolated, the aluminium scrap is melted and reformed.

When operating at full capacity, REALITY is expected to reduce JLR’s production-related carbon dioxide emissions and the amount of virgin aluminium it requires to produce vehicles. As vehicles become increasingly automated, connected, electric and shared, JLR says it will be able to plan for the retirement of large fleets, which will enable it to engineer closed-loop recycling processes into tight production schedules, as the vehicles can be recovered and shredded en masse.

The project lead for REALITY at JLR, Gaëlle Guillaume, says: “More than a million cars are crushed every year in the UK and this pioneering project affords us a real opportunity to give some of them a second life. Aluminium is a valuable material and a key component in our manufacturing process, and as such we’re committed to ensuring our use of it is as responsible as possible.”

The aluminium recycled from the I-PACEs is being tested by researchers at Brunel University in the UK, who are evaluating its strength and purity to ensure it meets the required mechanical standards for the manufacture of body panels for future JLR vehicles.