While mixed-material vehicle body structures yield impressive weight reduction results, the joining processes present a challenge for OEMs. How do they fix the myriad materials but still maintain the requisite properties and structural integrity? 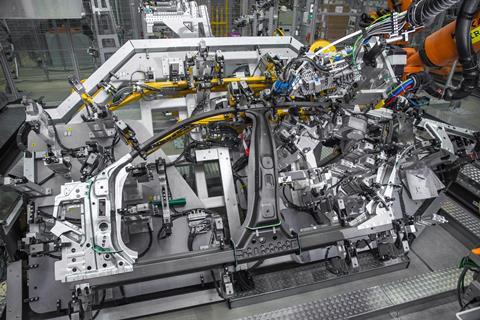 OEMs are evermore focused on reducing weight in vehicle structures, and are looking to exploit strong, stiff and lightweight composites in mixed-material architectures. Porsche’s recently unveiled 911 Cabriolet is a good example of this. Of note is the vehicle’s A-pillar, which is made from a hybrid of glass fibre-reinforced plastic (GFRP) and boron steel. This iteration of the part is 2.7kg lighter than the previous version, which was made from tubular ultra-high-strength steel. Overall weight reduction for the 911 is 7%.

The composite element of the A-pillar comprises three elements: a continuous glass fibre-reinforced thermoplastic sheet; die-cast ribs; and a structural foam. The GFRP Sheets are cut and compression moulded while simultaneously being equipped with a ribbed pad made of die-cast plastic. In the last process step, an additional layer of structural foam is added, which expands when exposed to heat during the painting process to secure the reinforcement within the cross-section of the A-pillar.

This mixed-material approach yields impressive results in terms of reducing weight, but it throws-up a number of problems for production. Ranking high among these is joining. How can these myriad materials be fixed together without affecting their structural integrity or altering their individual characteristics? For the assembly of the 911’s body structure, Porsche uses no less than 10 joining methods, including welding, bonding, clinching and screwing. 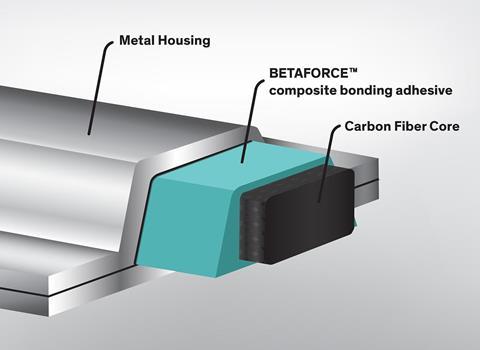 Abhay Vadhavkar, director of materials and manufacturing technology at the Center for Automotive Research (CAR) in Ann Arbor, Michigan, US, says the development of effective technologies for joining dissimilar materials is vital. “A structure is only as strong as the joints,” he states. “If stresses cannot flow from one component to the other through joints, the structure will not meet its design function.”

There are two key factors that must be considered if composites are to be joined successfully with other composites and metals, according to Vadhavkar. First, the surfaces of the materials to be joined must be compatible with the bonding agent to ensure the integrity of the joint. Second, differing coefficients of thermal expansion, which could induce stresses in joints that could affect their strength, must be managed.

Mechanical joining methods, such as rivets, bolts and screws, are popular methods, but pose some significant problems. Punching holes in these materials with screws and rivets can damage their laminar structure, which is vital to the material’s strength and stability. Also, the punched hole must be sealed using a complex process to prevent delamination of the material.

One solution comes from researchers at the Fraunhofer Institute for Laser Technology (ILT), who have found that through the use of ultra-short pulse (USP) laser radiation, durable and high-quality openings can be formed in unimpregnated carbon fibre fabrics into which functional elements can be subsequently inserted. Using the process, even demanding drilling contours such as star-shaped holes can be formed, enabling the integration of load-adapted inserts. When the fabric is later impregnated, the matrix creates a bond between the carbon fibres and the insert, eliminating the need for additional adhesives.

Using USP laser beam machining, both preforms and consolidated carbon fibre-reinforced plastic (CFRP) components have been drilled successfully, without destroying the properties of the fibres or the laminate. The process typically takes between a few seconds and one minute, and can be highly automated.

When joining composites to metal, there is also a high risk of corrosion. Also adding any mechanical attachment method will add weight to the structure. As such, mixed material designs are increasingly being held together with adhesives and, according to the research centre, adhesives will become the dominant form of joining by 2030 – eclipsing even resistance spot welding. Indeed, adhesive bonding is a proven method for thermoset-based CFRP-to-CFRP joining. For the production of each CFRP passenger cell for BMW’s hybrid-electric i3, the carmaker uses 173 metres of adhesive 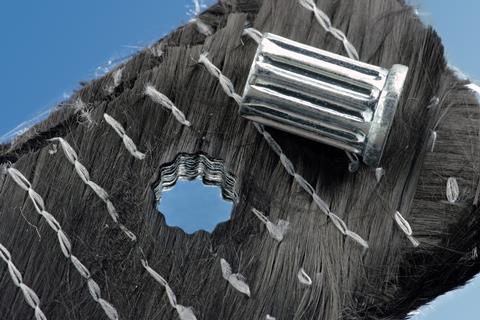 Vadhavkar says: “Adhesive bonding has been used in the manufacturing automobiles successfully for over a decade. [It] increases the stiffness of body structures, which improves noise, vibration and harshness. Using adhesives for impact loads and in highly corrosive environments, such as underbodies, are more challenging, but carmakers have figured out ways to make these happen. With robotic application and temperature-controlled bulk adhesive delivery systems, adhesives can be incorporated in traditional production lines.”

Increasingly, adhesives are being exploited to manufacture steel components that are reinforced in key areas with composites, such as the 911’s A-pillar. BMW, for instance, is using what it describes as a hybrid pressing process to produce metal-carbon fibre-reinforced plastic parts for the chassis of its 7 Series. Using this process, carbon-fibre fabrics impregnated with a still-wet resin are placed in a moulding die with sheet steel, then pressed and hardened – bonding the steel to the CFRP. The resulting hybrid components are light, but offer a high level of rigidity and good crash performance.

Dow has recently unveiled an injection bonding technique it has developed for such applications, and it is particularly suitable for bonding CFRP parts to metal in side-frame applications along the roof of vehicles using its Betaforce adhesives. Here, the CFRP part is used as an inlay in a metal housing running along the A-pillar into the roof and down the D-pillar – ensuring the integrity of the passenger compartment in the case of a side-pole impact or rollover, as well as increasing torsional stiffness.

Dow says Betaforce helps address the challenge of integrating such long CFRP components into metal parts while managing the materials’ different coefficients of linear thermal expansion. Based on a two-component polyurethane structural adhesive, Betaforce is characterised by a high elongation factor and a high modulus. While the high modulus provides the necessary stiffness, the high elongation factor imparts a level of energy absorption and flexibility sufficient to manage the different coefficients of linear thermal expansion. The adhesive is injected by a robot and surrounds the CFRP to form a durable bond. 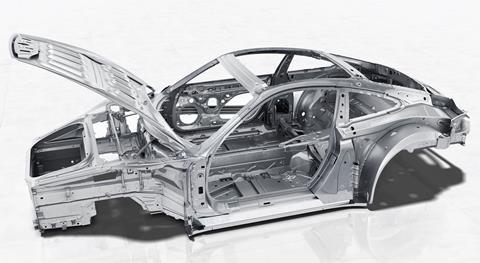 “For the assembly of the 911’s body structure, Porsche uses no less than 10 joining methods, including welding, bonding, clinching and screwing”

Researchers at the Fraunhofer Institutes for Production Technology (IPT) and ILT, meanwhile, are working to develop an adhesive-free hybrid manufacturing process. The process is based a combination of laser texturing and laser-assisted tape placement, whereby the surfaces of metal parts are imparted with a specially developed, defined, rough structure that allows reinforcing patches of continuous fibre-reinforced thermoplastic to be bonded directly to it. The bond is mechanical, eliminating any need for pre-treatments or adhesives and bonding agents.

A tape-place method is used to apply the continuous fibre-reinforced thermoplastic to the metal parts, where they are heated with a laser so that the thermoplastic matrix melts and flows into the laser textured cavities where it forms a bond when it solidifies.

The researchers claim the process is particularly suitable for mass production, as no post-processing steps, such as curing operations, are required to consolidate the material after the tapes have been placed. The precision localised heating of the tapes reduces distortion and the formation of residual stresses in the materials as they are joined. Finally, the laser texturing process is reliable and repeatable. The research partners have manufactured a hybrid rocker panel to test and prove the feasibility of the process.

To effectively incorporate materials such as composites into vehicles, the dizzying variety of methods that can be used to join them must be shown to be reliable, cost-effective and durable under varying loads and in different environments. Vadhavkar and his colleagues at CAR are working with counterparts at Lightweight Innovations For Tomorrow (LIFT) to test and evaluate a wide range of such joining technologies.

He says: “The project is funded by the Department of Defense through LIFT. We have 13 companies along with the University of Michigan participating in this project, providing in-kind support while being able to highlight their joining technology for mixed materials.