A blaze in Bavaria

The foundations have been laid at BMW’s Dingolfing plant to make more electrified models and components, but more is yet to come. Michael Nash reports 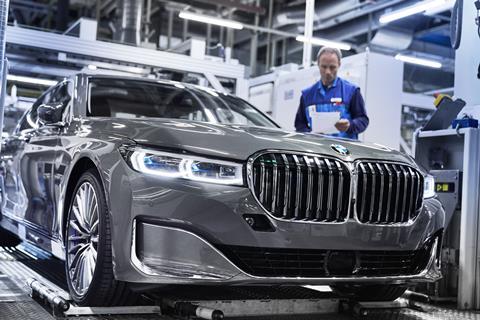 As its largest production site in Europe, BMW Dingolfing is a hive of activity, and is a little unusual when compared to most other car factories. Not only does it churn out a long list of different models, it is also home to the production of various parts and components that are shipped to other sites before being used in cars, some of which do not carry the BMW badge. Below is a rundown of what goes on behind the factory doors at Dingolfing, as well as a roundup of the latest investments and production activities.

A little bit of everything

Around 1,600 vehicles roll off the assembly lines every day at Dingolfing, including the 3, 4, 5, 6, 7 and 8 Series. The plant is also home to production of various components, such as seats, chassis and drive systems. This includes high-voltage batteries, e-transmissions and drive structures, which are used in vehicles at Dingolfing as well as those made at the company’s other production site in Leipzig.

Furthermore, the bodyshop at Dingolfing is BMW’s centre of excellence for aluminium, and is therefore also used to make bodies for all Rolls-Royce models. These go on a separate line to the BMW models and are shipped to the Rolls plant in the UK for surface finishing and final assembly.

As well as aluminium, models made at the plant take advantage of advanced high strength steel (AHSS) and carbon fibre reinforced plastic (CFRP) in order to achieve a lightweight construction. Structural components around the passenger compartment of the new 7 Series, for example, are made of CFRP. And in the new 8 Series, BMW is combining sheet moulding compound (SMC), CFRP and steel to save weight.

There is also a ‘Dynamics Centre’ at Dingolfing which acts as a storage facility to provide BMW and Mini dealerships around the world with any necessary parts. From here, over 45,000 components are shipped every day to destinations all over the world.

Finally, the Dingolfing site also has toolmaking and plant engineering facilities. This is where in-house employees design and make production tools to enhance plants in BMW’s network. 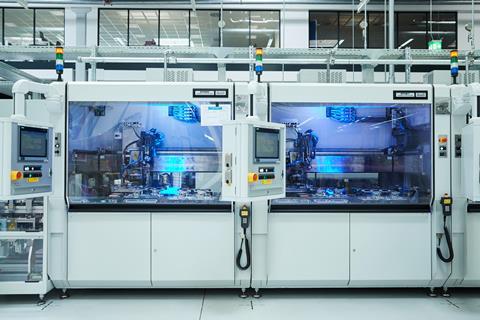 BMW has been making batteries and electric motors at its Dingolfing plant for plug-in hybrid electric vehicles (PHEVs) since 2015. Over the past four years, extensive preparations have been made to ready for a rise in demand of electrified vehicles.

A few months before announcing the production of the new 7 Series, Ilka Horstmeier, director of BMW Group Plant Dingolfing, revealed plans to expand electric drive production at Dingolfing ahead of the launch of the new sedan as well as the 8 Series and iNEXT models. This, he said, would create up to 2,000 jobs

“We want to, and will, emerge as a winner in our industry’s technological transformation,” he commented. “And we will continue to pioneer future topics such as e-mobility and autonomous driving. Our industry is experiencing exciting times, and the Dingolfing plant is definitely the most exciting place you can be right now. This is where corporate strategy becomes reality.”

As well as components for the electric Mini and 7 Series PHEV, electric drive systems for upcoming models such as the iX3, the i4 and iNEXT will also be made at Dingolfing from 2020.

Last year, BMW announced it was investing an undisclosed amount in the plant in order to house the production of batteries for the all-electric Mini. The ‘mid-double-digit-million-euro’ amount would be used to construct a new assembly line and to implement ‘extensive remodelling’ measures.

“With the launch of new models and growing demand for electrified vehicles, we will be stepping up production of electric components significantly over the next few months and years,” revealed Roland Maurer, head of planning and production e-powertrain at the BMW Group. The motors used in the Mini were originally sourced from the OEM’s other plant in Landshut, which is located just a 30-minute drive away.

The new Mini electric is being made at BMW’s plant in Oxford, the UK, as well as in China. The latter is part of the German OEM’s partnership with Brilliance Auto - a company headquartered in Shenyang. The two have recently unveiled plans to spend over €3 billion (US$3.42 billion) in new and existing plants, doubling output at their facility in Tiexi and upping capacity at Dadong.

They are also boosting battery production output at their Shenyang facility ahead of the launch of BMW’s iX3 in 2020. Despite its clear focus on China, BMW has vowed to enhance its production network in Europe, with the Dingolfing being one of many examples. It is planning to build a new assembly facility in Hungary, and is also in the midst of expanding its Leipzig plant.

The German OEM has also recently started production of the new 7 Series sedan at its Dingolfing plant. The model, which is now in its sixth generation, is the first plug-in hybrid from the German OEM to come with a six-cylinder engine. “The BMW 7 Series has defined our identity at this site for over 40 years,” commented Horstmeier. “We are proud that BMW’s top model, the new BMW 7 Series Sedan, will also be built here in Dingolfing. Our goal as the brand’s primary plant for the luxury class is to ensure that every vehicle our experienced and competent team puts on the roads guarantees excellent quality.”

The 7 Series is the first BMW model using the company’s fourth generation battery technology. This provides the sedan with a pure electric driving range of up to 58km (36 miles). These batteries are made in Dingolfing at BMW’s competence centre for e-drive production, which is just a few kilometres away from the vehicle production plant. The centre also supplies batteries and other electric powertrain components to other BMW plants across the world.

One of the key themes underpinning the production of the new 7 Series is digitalisation. For example, workers on the assembly lines use smartwatches that provide a notification when a more customised order must be built, before providing instructions for any additional work steps. Another important tool being used is virtual glasses, allowing BMW to train employees on complex pre-assembly processes such as the construction of the rear lights.

The 7 Series is the number-one export from the factory in Lower Bavaria. China is a particularly strong market for the sedan, with 44% of global sales being delivered to Chinese customers in 2018. Over 1.9 million 7 Series have been built at Dingolfing since production first began back in 1977.

BMW held its 99th Annual General Meeting in May 2019 at the Olympic Hall in Munich. Harald Krüger, chairman of the board of management of BMW, provided an insight into the company’s performance figures and investments during 2018, with a particular focus on electrification and mobility services.

- Every minute, 19 people in Europe used BMW’s car-sharing service. DriveNow cars drove more than 100m kilometres: a third of those were in all-electric mode.