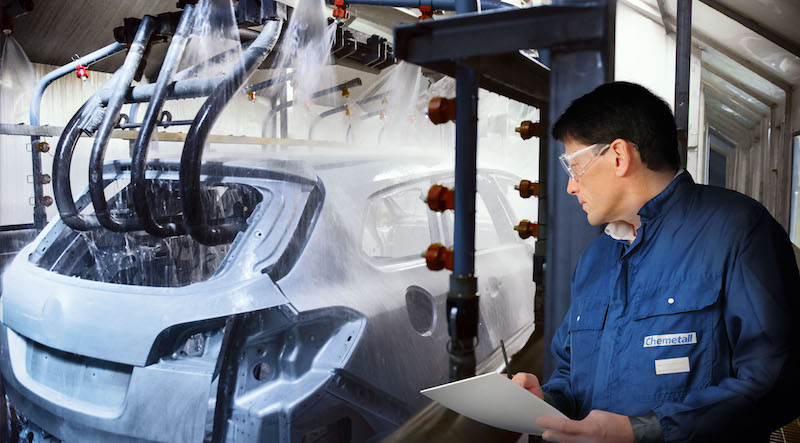 Automotive manufacturers show great interest in the new Gardoclean S 5411 cleaning technology because this silicate- and borate-free product perfectly meets important demands of the automotive industry: away from borate-containing cleaners and towards sustainable technologies.

Borates are problematic due to their reproductive toxicity. Even if the European Chemicals Agency (ECHA) has not yet published an official date for the ban of borates, future-oriented companies are already today considering alternative solutions. 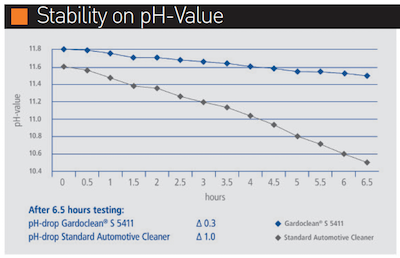 Although silicates undisputedly support excellent cleaning performance, on the one hand, they also frequently cause dry-on marks and paint defects on substrate surfaces, on the other. Such defects have to be addressed manually at substantial cost.

“In view of the good results and easy handling, our customer is now planning to deploy the silicate- and borate-free cleaner to his passenger car and commercial vehicle production facilities”, says Nico Gruss from Chemetall’s technical field service. He has already accompanied several product changeovers: “Normally, the existing cleaner bath can be replenished with our new cleaner and changed to the new technology,” he states. “This facilitates the changeover for our customers”. 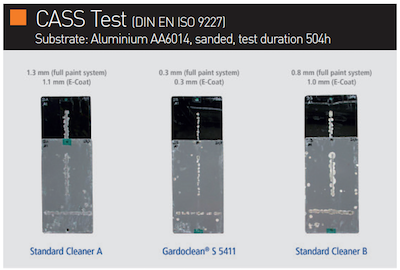 With the new technology, the handling and control of the cleaning process is simplified. Cleaner consumption can be optimised as a function of contamination, carry-over, plant design or substrate throughput.

With the new technology, the handling and control of the cleaning process is simplified. Cleaner consumption can be optimised as a function of contamination, carry-over, plant design or substrate throughput.

The purposefully adjusted ratio between free alkalinity and total alkalinity at a moderate pH-value ensures that the pickling attack on individual substrates, like for example aluminium and galvanised steel, can be easily controlled.

Uniform resultThe purpose of cleaning is to reach a balance between a uniform pickling loss and an optimised surface. “With the use of Gardoclean S 5411, we consistently achieve a significantly more homogeneous surface“, says Anna Verena Mohr, developer of the new cleaning technology at Chemetall.

This uniform optical result is also confirmed by Gruss after having commissioned the production line. “In the beginning, we were faced with the challenge of having to control the immersion marks caused by the slow shuttle conveyor system. An adjustment of the cleaner concentration quickly solved the problem and significantly improved the quality”. 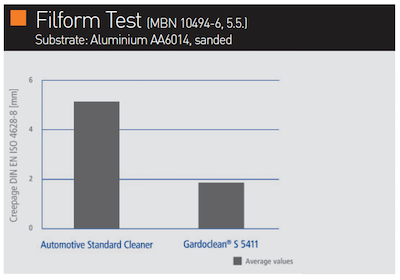 The new cleaning technology has a major influence on the quality of the overall pretreatment process. All corrosion tests conducted at the Chemetall laboratory on both, aluminium and cold-rolled steel substrates, attest to a significantly reduced creepage and thus to an improved product performance. The test results were compared with those obtained with standard cleaners normally used in the automotive industry.

In a salt spray test, the so-called CASS test according to DIN EN ISO, Chemetall test panels made from ground aluminium substrate (AA6014) were subjected to 504 hours of testing. At 0.3mm in the structure and in the CEP coating, creepage is on average 60% lower than in the case of the reference products. 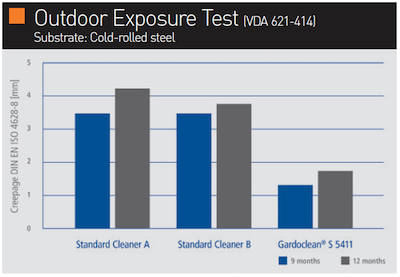 The Filiform test performed on ground aluminium substrates according to a specific OEM standard produced a significantly lower creepage for Gardoclean S 5411 compared with a standard cleaner used in the auto industry.

The silicate- and borate-free product also yields a very good quality on cold-rolled steel. Outdoor weathering according to VDA 621-414 showed a creepage of 1.3mm for Gardoclean S 5411 after nine months while the creepage measured in the two reference products already amounted to as much as 3.5mm. After more than twelve months of testing, the creepage of the new cleaner technology was 1.8mm and that of the two reference products was 3.8mm and 4.2mm, respectively.

“The high process stability, the consumption-optimised mode of operation and the excellent cleaning results have convinced our customer to also deploy this product to other production facilities around the world”, says Gruss. Add to this the fact that, with the use of the borate-free cleaner, the effort required for waste water treatment can be significantly reduced and thus – depending on the country in question – substantial cost savings can be realised. While ECHA has not yet defined an official end date for borates, forward-thinking automotive manufactures can already now rely on Gardoclean S 5411 as a modern and sustainable solution offering an enhanced product performance.