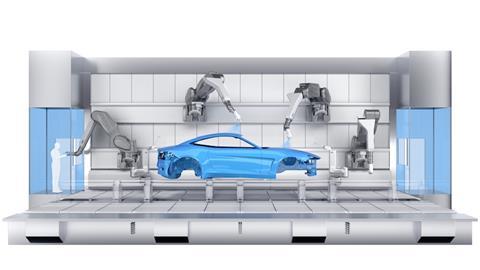 EcoProBooth combines up to three painting operations in one box

Dürr’s EcoProBooth paint booth realises possibilities scarcely thought possible from a technical point of view up to now. Production no longer needs to be halted for routine maintenance and cleaning work on the application technology. A maximum air recirculation rate of 95% reduces energy consumption and CO2 emissions. In addition, interior and exterior painting is combined in a single workstation for the first time. Fewer colour changes, thanks to a clever box layout, also enable a reduction in VOC emissions. The innovative box is an essential part of Dürr’s new “Paintshop of the future” concept, and also has benefits for traditional line production.

In the automotive industry, the variety of models and thus the manufacturing spectrum within which individual plants need to operate is growing. This means that production must be much more flexible in order to be able to cope with demands that will continue to increase in the future. In response, Dürr developed the “Paintshop of the future” concept, based on a visionary layout made up of flexible boxes instead of the conventional rigid line. The beating heart of every paintshop is the paint booth. The EcoProBooth delivers a forward-looking concept that represents a significant departure from previous booths and is precisely tailored to the box layout of Dürr’s “Paintshop of the future”. 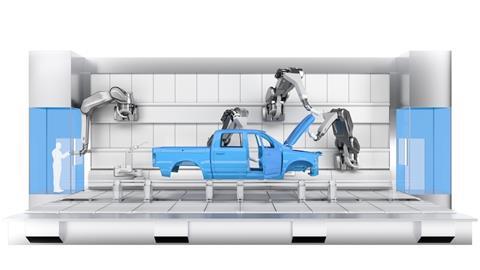 Everything in one box, flexible and economical

In order to save resources, the EcoProBooth combines up to three painting processes – the interior and the two exterior applications – in a single booth. Up to eight painting robots assisted by four Scara robots for opening the doors apply the paint to the body – both inside and outside. This saves process time. Firstly, two of the previous three conveying operations are eliminated since the bodies stay in the booth and do not have to be conveyed from one booth to the next between the application processes. Secondly, the robots for the exterior painting can be cleaned while the other robots are applying the interior paint, and vice versa. The system of task distribution enables different, optimally coordinated application technology to be used in one booth for the exterior and interior painting, and in this way the best possible quality achieved.

When a paint booth is in air recirculation mode, maintenance personnel cannot enter due to the hazardous solvents present in the air. The workers need protective breathing equipment, or have to wait out the decay time. There is also a risk of walking dirt into the booth, which in turn can result in paint defects and therefore rework. The new EcoProBooth paint booth provides a comprehensive solution here with service cubicles at each corner of the paint booth. They are continuously flushed with fresh air and can be entered at any time without hesitation. If a robot needs to be cleaned or maintained, it moves to the service cubicle and stretches its arm through a connecting window into the service area, where a worker can easily reach it. These cubicles comply with the limit values for safe workplaces.

Dürr developed the “Paintshop of the future” concept, based on a visionary layout made up of flexible boxes instead of the conventional rigid line

Up to now, production had to be stopped at least every two to four hours to clean robots or carry out minor repairs. Each of these stops can result in five to ten minutes of production time being lost. It is now possible during production to clean atomizers or replace bell disks without the worker in question having to enter the application area in the paint booth. This greatly increases the plant availability.

The EcoProBooth maximizes the air recirculation rate as a way of minimizing the energy needed and thus the CO2 emissions. While a classic dry separation system has a recirculated air to fresh air ratio of 80:20, in the EcoProBooth it is 95:5. Five percent fresh air is added to the process air to adhere to a safe margin to the lower explosion limit. In the associated EcoDryScrubber dry separation system, the air is first purified to remove the paint particles and then reconditioned in a recirculating air unit assigned directly to the paint booth. The energy required to recondition the recirculating air is much lower than for conditioning fresh air from the outside, which generally – depending on the region and time of year – differs greatly from the conditions in the booth. The maximum air recirculation rate thus keeps the energy consumption and the CO2 emissions for conditioning as low as possible. 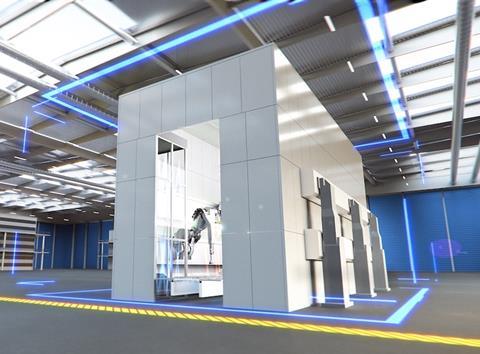 Flexible box instead of rigid line. The new paint booth is the beating heart of the “Paint shop of the future” modular box concept from Dürr

Maximum flexibility in the paint shop of the future

The EcoProBooth comes into its own in the modular box concept of Dürr’s “Paintshop of the future”. The paint booth, which is designed for 12 jobs per hour and a mix of bodies from compact cars to medium-sized SUVs, allows easy scaling according to changing quantities. The size and design of the box are standardised, with the result that straightforward conversions and extensions are possible without a knock-on effect on production in other box sections. The clever box layout also means that material consumption is reduced due to smaller losses when changing colour. Dividing the line into shorter sections makes it possible to distribute the painting jobs so that colour changes are minimised. This saves paint and detergent and thus reduces both costs and VOC emissions.

The new paint booths can, however, also complement a production line setup. The EcoProBooth increases plant availability in this case by integrating the service work into the process steps without having to interrupt production. The new booth makes the entire painting process more sustainable because of its lower energy requirement.

Whether major volume manufacturer or e-mobility newcomer, the EcoProBooth is an investment that promises maximum flexibility for the future – in terms of new models, new types of paint, and modified processes.