Boxing clever in the paintshop of the future

Scalability and flexibility are essential in the automotive industry production processes, and Dürr’s paintshop of the future is reimagining the car body finishing process 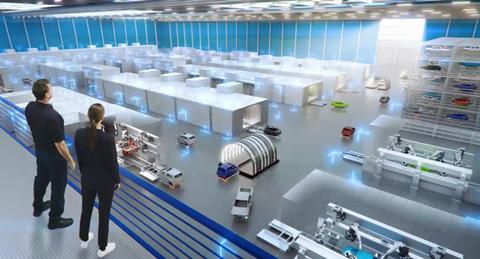 Growing model diversity, different drive technologies, and greater personalisation are pushing conventional line manufacturing to its limits in the automotive industry. Whether major high-volume manufacturers or small e-car startups, manufacturing has to make the switch from rigid to flexible and respond more quickly to customer and market requirements.

Dürr’s new ‘paintshop of the future’ concept breaks away from the traditional line layout, splitting up industrial automotive painting into boxes or short process sections for the first time. This allows the automotive industry to paint much more flexibly. In addition, the paintshop of the future saves time and material, increases availability and makes painting more sustainable.

Model ranges and application processes are becoming more diverse. But the greater the variety of models painted on a line, the more inefficient the process. This is due to the fixed cycle times, which are based on the biggest model and the paint with the longest application time. If smaller car bodies could be transported faster and some colours could be applied more quickly, this would save time and increase output.

However, the fixed cycle does not allow this. This was one of the many reasons that prompted Dürr to have a rethink and develop a radical new layout for future requirements. 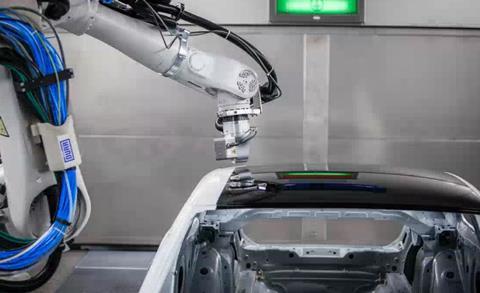 “With the ‘paintshop of the future’, Dürr is reimagining the painting process and moving beyond the boundaries of the production line,” explains Bruno Welsch, member of the board of management of Dürr Systems AG. “The new approach adapts to the needs of manufacturers and enables an efficient and flexible painting process in every production scenario.”

The general idea of the ‘paintshop of the future’ is based on splitting up the 120 work steps involved in a painting process into boxes and smaller sections. Instead of a fixed cycle, the process times in each box are precisely adapted to the needs of the individual body. This is made possible by processes running in parallel in the boxes and the interaction with a central high-bay storage system and the automated guided vehicle (AGV) system, EcoProFleet.

The fleet of AGVs is controlled by the software DXQcontrol. It guides the AGVs with the car bodies intelligently to the next processes, and in this way ensures efficient utilisation of all the boxes. It enables the bodies to be sorted in anticipation of future processes, brought to and collected from the right workstation with pinpoint accuracy, and passed off to final assembly at the end in the sequence planned by the manufacturer. The concept also enables easy expansion of capacities or smooth integration of new models. The revolutionary box concept can be applied to the entire top coat and workstation area, or just to selected process steps. 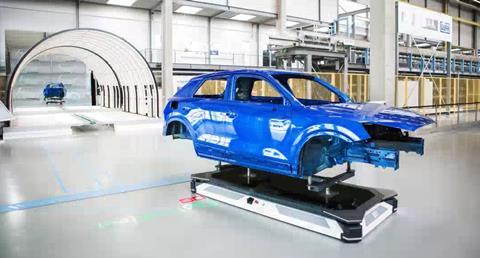 In terms of the concrete implementation, the box concept means that three painting processes – the interior and the two exterior applications – can be combined in just one booth. This patent-pending concept, the EcoProBooth, thus helps to save process time, since two of the previously usual three conveying processes are eliminated.

Paint-loss during the colour change process can even be reduced by up to 10% if just one paint is applied in a box; for instance, the current top seller, white. Splitting up the painting process into boxes shortens the overall process by tailoring the application time to the individual vehicle. These properties combine to reduce CO2 and VOC emissions.

The overall equipment availability also increases, since any malfunction only has an impact on the box section in question and does not affect the entire production line, in contrast to the classic line manufacturing model. The variable layout also makes integrating special processes such as a special paint supply or overspray-free two-tone painting easier and more cost efficient.

Adaptable to both large and small production

The concept of the ‘paintshop of the future’ is geared towards the specific requirements of various OEMs. It offers major high-volume manufacturers with a high hourly capacity the opportunity to integrate new models and technologies with greater ease. It enables companies that want to avoid investment risks to predictably expand from 24 units per hour to 48 and 72 units in two steps.

Newcomers to electric mobility can start their manufacturing with minimal quantities and gradually expand as demand increases. The modular concept is also industry 4.0 capable and can be combined with the intelligent software products from Dürr’s DXQ family for various scenarios. In this way, Dürr analysis tools make painting processes more transparent and help to further increase the first run rate.

Paintshop of the future: Advantages

eg. teaching of application technology for new car bodies, while production is continuing in other boxes

• Higher availability: Production continues even at standstill of individual boxes.

EcoProFleet is the first AGV specifically optimised for the needs of paintshops. Its paint- and solvent-resistant platform is just 225mm high. This low height means the AGVs can go under all typical workstations and conveyor systems in order to drive a car body into a workstation, hand over, or pick up bodies, and thus work together perfectly at the interfaces.

In order to transport the heavy loads stably, EcoProFleet has been designed with an unladen weight of 850kg in good proportion with the maximum load capacity of 1,000kg. The integrated technology with laser scanner and safety limit speed guarantees a high level of safety.

EcoProFleet enables a modular painting process in which different processing times for the car bodies no longer cause waiting times. Therefore, the resulting cost benefits are all the greater the more different and individual the bodies are constructed and painted. Downtimes caused by sudden malfunctions are also reduced to a minimum, since AGVs can be redirected to a different workstation or a different painting booth.