Lightweighting the EV is a challenge to celebrate

There is a new impetus to save weight as vehicles become powered by electric powertrains. Reducing the weight of a vehicle by optimising the mix of materials and the application in design is now a key focus. 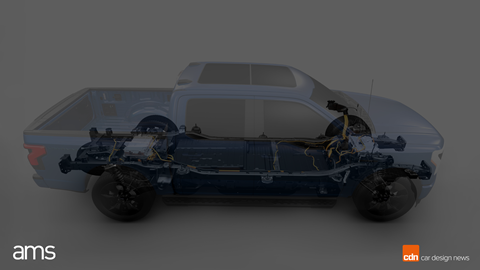 The average weight of a lithium-ion battery is 400-600kg, and with range according to charge very much tied in with weight, designers and material suppliers are looking at new ways to lighten the vehicle structures, particularly around the battery enclosure, while at the same time maintaining safety through structural integrity.

At the same time, the carbon emissions and sustainability of the manufacturing processes involved in the production of the materials is also a major consideration.

Lightening the Lightning
Scott Anderson, Ford’s lead interior designer for SUVs and trucks, said lightweighting was a top issue as consumers looked at range as a critical factor in their choice of battery electric vehicle (BEV). That is certainly the case in the choice of the ever-popular pickup truck in the US and Ford has made some advanced structural weight saving in the electrification of its Ford F-150 – the Lightning. 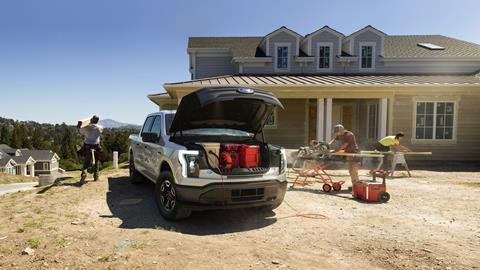 Ford’s F-series is the most popular pickup in the US (and has been for almost 40 years), so convincing the public that an electric version is as good as that one driven by an internal combustion engine (ICE) is crucial to the carmaker’s continued success with it. As well as saving to accommodate the extra weight of the battery, Ford had to maintain the range, power and cargo capacity, which are all selling points for a pickup.

“Lightweighting played a huge role for us on the Lightning programme,” said Anderson’s colleague Elvir Mesalic, senior exterior designer at Ford. “Repackaging the legacy platform that was handed down to us from the ICE F-150 meant we had to get creative. We had a limited budget [but] had to find more cargo space and enhance load capacity.”

The absence of a combustion engine in the front of the vehicle allowed Ford to reconceptualise a front trunk – or ‘frunk’ as Mesalic called it – to meet the functional need for storage space and to achieve best-in-class cargo volume. Productivity, durability and serviceability were the three key demands.

“We built the side walls and floor [of the frunk] with a compression-moulded sheet metal compound, that is pretty strong and very light,” explained Mesalic. “We had a scuff plate that needed to be integrated in the SMC [sheet moulding compound] and that enabled us to tighten the gaps. It also helped achieve a higher load-weight capacity just by minimising the weight.”

Mesalic’s team also identified that it could take four out of the five metal brackets that were sitting under the floor of the frunk, where were legacy components from the ICE version of the F-150.

“By eliminating those four brackets not only did we save weight, we were able to lower the scuff plate and the Z-height, also by integrating a waterfall grill, which enabled us to create a very low entry point for the frunk,” explained Mesalic. The Z-trim height determines the proper ride height for the front end of the vehicle.

While finding these savings, Mesalic’s team was on a tight budget and could not resort to expensive high-tech materials. It was more a case of carving out weight across a number of different areas.

“To achieve lower load height, for instance, we used the B side of the scuff plate, ran CAD analysis and really made sure that the minimum requirements were taken care of but also that any extra weight was carved out,” explained Mesalic. “The sum of all these little areas, where we carved out weight, made a big difference.”

Limitations led to a greater focus on innovative solutions and the same was the case on the development of the Maverick compact hybrid truck. According to Anderson, creativity in the absence of constraint can breed inefficiency. He said being forced by a low price point and fast development schedule provides a licence to try new things and the programme for the Maverick was the fastest ever completed at Ford. It has now become the new template for the company.

The interior concept of the Maverick is pared down and reductive, and it showcases the structure of the vehicle’s body and the sustainable materials used to construct it. In doing so saves weight by removing parts that do not need to exist. 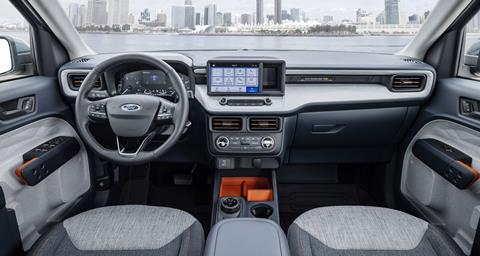 The interior concept of the Maverick is pared down and reductive, and it showcases the structure of the vehicle’s body and the sustainable materials used to construct it

Less is more
Steel is often overlooked as a material of choice for lightweighting but according to Robert Ström, automotive design specialist at high-strength steel supplier SSAB, using less steel in a more tactful way in the body of the vehicle guarantees weight savings.

“[Steel] is not lightweight but when you are using a strong steel and you are using less of it you are getting a lighter application,” he said.

To prove that SSAB has been working on its own EV concept – the Docol EV – a steel body frame to contain an EV’s battery pack that is crash safe. The frame includes a beam that absorbs the weight of the heavier lithium-ion battery and also cross members to restrain the high load in compression. The compressive strength of steel is its ability to withstand loads that reduce its size when pressure is applied, and is the most challenging way to use thin, high strength steel.

Designing in a bigger radii in the corners of the steel frame (through rounder edges) and putting grooves in the flatter parts of the beams increases the load bearing profile of the metal.

“Dividing the big wide part of the beam into three less wide parts and introducing more radiuses through which more force can travel works better, said Ström. In doing so SSAB has increased the performance of the battery frame by 112% compared to the base model.

”This is lightweighting from our perspective,” he added. “You can use it for extra performance or turn it around and make a lighter car.”

Tunnel vision
One advantage that automotive engineers can take advantage of when it comes to lightweighting in an EV is the absence of a central drivetrain tunnel running from the front to the back of the vehicle.

At metal components provider Gestamp, Paul Belanger, director of the company’s North American R&D Centre, explained that this is allowing one-piece hot metal stamping of ultra high-strength steel floors. The floor of a vehicle which would traditionally be made up of 21 different parts. Gestamp is putting in ductile patches that are stamped in one operation complete with integrated floor cross members. It is a simple solution that exploits the battery structure that saves weight while retaining structural integrity and crash performance.

The underfloor area is predominantly taken up by the battery pack in an EV as carmakers look to install the biggest batteries they can to provide greater range for the customer. That puts a different sort of pressure on the integral rocker panel in the vehicle, which runs between the front and rear wheel wells.

Maximising the size of this panel to accommodate the battery while saving weight and also maintaining safety is a challenge steel provider ArcelorMittal has taken on with it S-in Motion project.

The company has increased energy absorption and anti-intrusion performance through greater ductility. At the same time, it has reduced by 30% the weight of the rocker panel, contributing to an overall 60kg saving in the weight of the overall body-in-white compared to its own BEV baseline. The advanced high-strength steel ArcelorMittal has provided is competitive on weight with aluminium and in the emissions created in the production of the metal compared with normal steel production.

That was just one example of where the structure of the EV is providing a new template for innovation in lightweighting, according to Jérôme Favero, the company’s head of automotive steel solutions – Global R&D.

Electric vehicles provide horizonal ‘skateboard’ architecture on which companies can innovate weight saving technology to balance out the heavy battery. It also opens up the opportunity for more flexible vehicle platforms.

Ford’s Anderson said the flexibility afforded by the BEV architecture meant Ford, and the wider automotive industry, was reinventing mobility and what a vehicle means to people.

”That hasn’t happened in my entire career, it has been a fairly standard formula,” he said. “Now we are seeing a lot more innovation unlocked because of the power choice. It gives you a challenge to celebrate.”