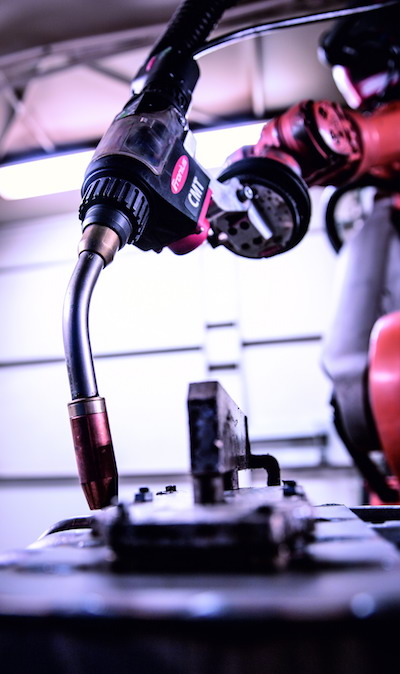 Fronius has recently added the successful CMT welding process to the company’s most modern power source, the TPS/i. The second generation of the “cold arc” allows robotic welding in many applications with unprecedented levels of quality, simplicity and process reliability. On account of these benefits, the renowned steel manufacturer and automotive industry supplier Voestalpine was the first company to choose the advanced CMT technology for use in series production – to great success.

“The second generation of the CMT process represents another quantum leap in comparison to the previous version, despite the fact that the latter already offered outstanding welding quality and process reliability,” explains Michael Nowasz, who is delighted after three months of series production. For the head of the joining department at Voestalpine Automotive Components Schmölln GmbH, one thing is certain: “We have once again noticeably improved our quality thanks to the numerous innovations and further developments of the TPS/i in combination with the tailored CMT process and also significantly extended our room for manoeuvre with regards to joining processes.”

As in the previous generation, the new CMT (Cold Metal Transfer) process excels with its particularly low heat input and high gap-bridging ability. This is achieved through the extremely dynamic arc control. “This is where Fronius’ chosen approach differs noticeably from other processes, as droplet detachment and droplet transfer are not only controlled electronically by the power source, but are also aided mechanically,” says Nowasz. To do this, the wire electrode is always precisely pulled back slightly with the aid of a push-pull welding torch when the current has reached its maximum and is switched off. This creates an especially stable arc that is effectively spatter-free and facilitates higher welding speeds.

“The transition from the standard MAG process to CMT allowed us to improve our output to a satisfactory extent,” adds Nowasz, reflecting on the introduction of the first generation of the CMT process in 2011 at the site in Schmölln. “Since the switch, hardly any spatter has had to be removed, meaning my employees have been able to focus on what our customers from the automotive industry rely on: the quality of the weld seam.”

A further benefit of the CMT solution from Fronius is the high availability of the CMT system, says Nowasz. “If the arc is extinguished for any reason, the process reignites it automatically. Ignition errors, the wire electrode welding to the contact tip or other similar annoyances, are now a thing of the past for us.”

Last but not least, the joining specialist values the variety of options for influencing the welding process offered by Fronius as well as the arc geometry. This also includes the option of combining CMT with a pulse process to better control the heat input into the base material via the arc, allowing faster welding.

Due to the thoroughly positive experiences, Nowasz ensured that the CMT process was added to the requirements specification for new welding systems as a standard process for the arc welding of steel sheets of up to 3mm. Voestalpine uses these to manufacture various automotive structural components from galvanised and high-strength sheets as well as aluminium sheets. Six of the twelve robotic welding cells at the Schmölln site currently use the CMT process.

Those in charge at Voestalpine reacted extremely positively to the second generation of the CMT technology introduced at the start of 2016 and Fronius’ suggestion of testing its use in series production. “We selected an A-pillar made from high-strength galvanised steel for the initial welding trials. This complex component is not only ideally suited to putting the new process through its paces because of the demanding nature of the material, but also due to the limited accessibility and the large gap widths of the manufacturing process,” explains Nowasz.

The first welding trials with the new CMT process and the TPS/i took place in Fronius’ institute of technology at its headquarters in Wels. “I visited the laboratory with our head of development and experienced the new CMT process in action,” says Nowasz. “What we saw there was simply fantastic. It was immediately clear to us that Fronius had made another huge leap forward.”

The TPS/i forms the basis of this technological leap, which does not simply comprise developments to the previous model, the TPS, but rather a completely redesigned power source. To do this, Fronius redeveloped all the components – from the control, the communication bus and the wirefeeder to the user interface, cooling system and the hosepack – from scratch. This allowed the company to use the latest technology and thus prime the whole system for maximum precision.

To allow the CMT process to reap maximum benefit from the TPS/i, the algorithm was drawn up afresh and developed for the second generation. The push-pull welding torch that had already undergone a complete redesign for the TPS/i series was not overlooked and a CMT variant was equipped with a digitally controlled, gearless AC servo motor for even higher frequencies of the oscillating wire electrode movement.

“One advantage of the new Robacta Drive robot torch is immediately noticeable,” says Nowasz. “It is more compact than the previous model, guaranteeing the improved access that we require ever more often for more complex components.”

The results of the welding trials on the real component were so impressive that those involved immediately set about transferring the new CMT generation to Voestalpine’s series production. Within a few days, the first of the six robot cells was converted by Fronius employees and then used to produce brackets from 2mm to 3mm thick blank steel sheets with CO2 shielding gas. This involves welding roughly a metre of weld seams comprising 48 individual seams with a maximum length of 35mm. “The next morning we taught in the robot together and welded the first parts on the same day,” says Nowasz. “It demonstrated that the right parameters can be found much more simply and quickly with the new system.” This meant only slight adjustments had to be made on the third day in order to achieve the optimal operating values.

This also allowed Nowasz to convince himself of the functionality of the new magnetic CrashBox. “We allowed the welding torch to move from the robot into a sheet – the protective device reacted so quickly that no damage to the welding torch, robot, device or workpiece could arise.” After a collision, the magnetic lock need only be re-engaged, meaning the reference point is retained - allowing welding to continue immediately. Tedious exchanging of the CrashBox and the reference travel therefore become obsolete.

After the tests, series production with the new CMT configuration could restart on the same day at Voestalpine. “I was absolutely delighted that the conversion went so smoothly and that even now – three months and 3,000 parts later – we haven’t had any production downtimes and haven’t had to request additional support from Fronius,” says Nowasz.