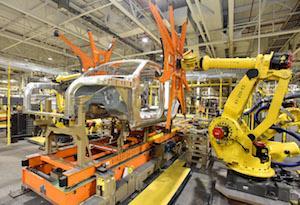 The truck plant in Kentucky will now produce FC modules for heavy-duty vehicles.

Toyota Motor said this week that it intends to begin assembling integrated dual fuel cell (FC) modules for heavy-duty trucks at its light-vehicle assembly plant in Kentucky from 2023.

A line at Toyota Motor Manufacturing Kentucky (TMMK) in Georgetown – the same plant that constructs the Toyota Camry and the Lexus ES 350 – will see the production of FCs intended for hydrogen-powered trucks.

David Rosier, Toyota Kentucky powertrain head, said the FC system is “necessary for a carbon-neutral future”. The 1,400-pound modules can tow around 40 tonnes of cargo up to 300 miles “all while demonstrating exceptional drivability, quiet operation and zero harmful emissions”, he added.

The move is consistent with the Japanese carmaker’s electrification strategy. It allows truck manufacturers to introduce emissions-free fuel cell electric technology into existing platforms with the company’s technical support.

“Heavy-duty truck manufacturers will be able to buy a fully integrated and validated fuel cell electric drive system, allowing them to offer their customers an emissions-free option in the Class 8 heavy-duty segment.”

Toyota also said it plans to provide powertrain integration expertise that will aid truck manufacturers in adapting these emissions-free drivetrain systems to a wide variety of applications in the heavy-duty trucking sector.

A display of this technology will be held at the 2021 Advanced Clean Transportation (ACT) Expo in Long Beach, California, on Aug. 31-Sept. 1. A prototype truck powered by Toyota’s FC kit will also be on show.

Toyota has been testing hydrogen fuel cells for decades, including unveiling the Mirai hydrogen-powered sedan in 2014. In addition, hydrogen-powered trucks at the Port of Long Beach in California have also been rolled out in their test form.

Both fuel0cell and battery-powered vehicles are electric. The primary difference is that batteries store electricity and fuel cells produce it while in use during an electrochemical process that extracts electrons from hydrogen forced through membranes within the cell. Other than electricity, water vapour is the only byproduct of this process.