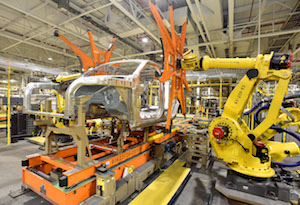 Dubai - The OEM has announced that it is increasing the production of two SUVs - the Lincoln Navigator and Ford Expedition - by 25% to meet "surging demand for both all-new models ahead of their arrival in the Middle East." The models are built at its Kentucky Truck Plant, which is receiving a new US$25m investment to enhance manufacturing line speed.

Upgrades to the plant include the addition of 400 new robots, a new 3D printer to help reduce the time it takes for prototyping, and improved data analytics tools to keep the assembly line moving as efficiently as possible. A 'robot lab' was also added, in which workers can test software tweaks or troubleshoot issues away from the factory floor.

Ford says that the new robots, many of which are collaborative robots or 'co-bots', are helping to increase line speed while keeping employees safe from repetitive-motion injuries. As for the data analytics tools, seven big-screen monitors have been set up to provide plant managers with minute-by-minute updates, allowing them to identify whether or not production targets are being met.

The new Ford Expedition was showcased at the Dubai International Motor Show in November 2017, while the Lincoln Navigator was unveiled at the 2017 New York Auto Show. According to Ford, both models have received significant pre-release demand from customers in Saudi Arabia, the United Arab Emirates and Kuwait.