As part of its shift to vehicle electrification, Toyota will invest $383m in four of its US powertrain manufacturing plants 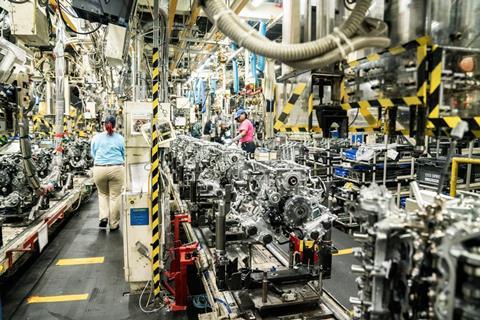 Toyota says this new investment supports the production of four-cylinder engines, including options for hybrid electric vehicles, at its Alabama, Kentucky, Missouri and Tennessee plants. “Toyota customers want vehicles that are fuel-efficient and electrified,” says Norm Bafunno, senior vice president, Unit Manufacturing and Engineering, Toyota. “These investments allow us to meet customer needs and quickly respond to an evolving market.”

The plant at Huntsville, Alabama will receive $222m and will create a new four-cylinder production line with the capacity to produce engines for both combustion and hybrid electric powertrains. The facility will also expand its footprint by 114,000sq ft, which marks the plant’s sixth building expansion since 2003. The $16m allocated to Toyota’s Georgetown Kentucky facility will used to expand the flexibility of the four-cylinder engine line announced last fall, which the OEM says will better position the plant to meet customer demand.