Solutions on the spot 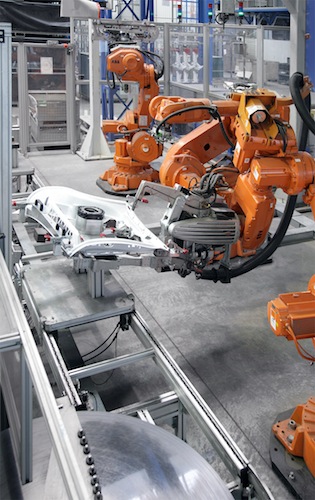 While spot welding has been the joining method of choice for automotive BIW applications, one area where it has shortcomings is welding aluminium. The use of this material in BIW structures has increased over recent years as OEMs seek to reduce the weight of vehicle bodies, and for spot welding to compete as a viable method of joining this alloy innovative solutions have been developed. There are issues with cost and efficiency, as well as limitations when it comes to the technical quality.

But at the George Fischer Automotive (GFA) plant in Altenmarkt, Austria, they have overcomes these hurdles with an innovative version of the highly productive resistance spot welding process to weld joins on the door-frames of the new Porsche Panamera.

Production engineering options
The process requires a 2mm thick aluminium stiffening plate to be joined onto the 3mm thick frames of the four die-cast aluminium doors of the Panamera. Alois Edtbauer, a toolmaker and foundryman who now works as a specialist buyer for foundry equipment and materials at GFA, explains the main objectives of the project: “In order to explore our production-engineering options, we looked at a number of joining processes to determine their suitability and cost efficiency” he says.

The four doors of each set need inside stiffeners spot welded to them. The doors are made of die-cast aluminium, each weigh 4kg and are coated with a titanium-zirconium (TiZrSiO4) anti-oxidation layer. “On the weldment, there is a main seal between the door and the frame at the point that has to be joined,” Wolfgang Hintsteiner, the engineer in charge of coatings who is also responsible for the Porsche Panamera doors, adds. “This means that the welding carried out here must be as spatter-free as possible. The thermally induced distortion on the work piece has to be kept within tight limits, and we have to be able to cancel it out with subsequent straightening.

“These are all reasons conventional resistance spot welding is unsuitable. Firstly, because it causes too much spattering, and secondly, because its uncontrollable and very intense point-focused thermal input risks badly distorting the metal sheet around the weld-spots. Unlike large area shape distortion, this is a defect that cannot subsequently be corrected, which means that the whole door, with its unsightly undulating surface, is then only fit for the scrap bin.”

Because of the extremely high dimensional accuracy required on the outside flange, clinching and punch riveting were not viable options either. The main exclusion criterion here was the shape distorting action of mechanical forces. Punching and riveting at such close-spaced intervals in the work piece would cause kinks and undulations that would mean an unacceptable degree of surface unevenness. Adhesive bonding and combinations of bonding with other joining processes, were also disqualified. Although adhesive bonded joins are made without impairing the shape of the work piece, they cannot be subjected to loading while they are curing, and the adhesive would cause unacceptable surface contamination.

Friction-stir welding also failed to make the grade and Hintsteiner explains why. “For our application, it was simply inferior to joining using DeltaSpot, from the production engineering point of view. The reason is that in friction-stir welding, you have to allow for the overall wall thickness of the parts. Because of the casting tolerances, we would have had to ascertain and key in the exact thickness of the parts to be joined before every single welding operation, which would hold up the production process for too long.”

DeltaSpot
So how does DeltaSpot work? A process tape is spooled between the electrode and the work piece, in the same rhythm as the spot welding operations. Instead of alloying onto a fixed electrode, the aluminium now alloys onto this tape, which is spooled forward after every spot -weld so that the used length of process tape is moved out of the contact zone each time. This means that for every single weld spot, exactly the same defined conditions apply. The process tapes prevent any direct contact between the electrode and the work piece, protecting both of them from soiling, alloying or other work piece induced influences.

This stabilises the weld process and greatly prolongs the electrode service life. They also improve the contact situation and avoid damaging the surface of the work piece. The process tape helps to prevent surface spatter, and widens the process window.

A third and very significant advantage is the scope that it gives for systematically influencing the heat balance. The result is more heat in the work piece at the same time as lower electrical input power.

Hintsteiner points to some of the features of the application that are particularly relevant in terms of user benefit: “The process tape lets us produce a uniform, exactly replicable spot that is exactly 5mm in diameter, and with 16 spot welded joins on every work piece we weld one of these doors in an approximately 100 second cycle, after which we don’t need to do any finishing work on the surface. As far as the appearance is concerned, we’re getting a very clean weld spot. It takes less than 15 minutes to change the process tape, and this only has to be done after about 5,000 weld spots, which means that we can weld around 300 Panamera doors without interruption. Every day we produce all four doors for 185 vehicles.”

The electrodes only need changing once per tape. “By way of comparison in suitable conditions, users would only be able to weld 20 spots using conventional resistance spot welding,” Edtbauer adds. “In effect, this would mean cleaning the electrodes once for nearly every door!

“We work round the clock, that’s 15 to 16 shifts per week. The DeltaSpot process creates a strong join between the two components without any difficulty – it only exerts minimal mechanical force and doesn’t need any extra mechanical materials. In our area of use, we’ve found it to be very cost-effective.” 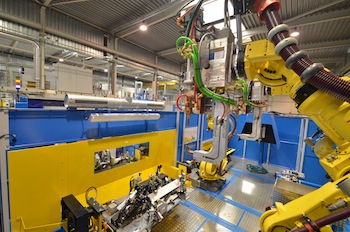 Another novel approach comes from Netherlands-based AWL-Techniek. They are constructing three machines to join aluminium utilising a combination of glue and spot welding. “We already have a lot of experience with aluminium arc welding,” Henk Strijker, welding and process expert at AWL explains. “However, welding this material with the spot welding method was relatively new until now. The client offered some clear arguments to use this particular technology for this project. One big advantage is the speed; every spot is welded in 180 milliseconds."

The application of new technologies does of course pose challenges. Compared to steel, aluminium has higher electric and heat conducting capacities, requiring more power. The large amount of power constitutes a higher magnetic field, meaning that the welding tongs, robot handling weight and jigs all needed to be adjusted to this.

"Before we constructed the machines, we conducted several tests to establish the parameters and to optimise process conditions,” Strijker adds “The construction of the first two machines went smoothly. We're currently working on the final machine."

TypeA priority in any welding cell is minimising any downtime due to maintenance issues. At Volvo Cars’ component factory in Olofström, Sweden, this concern was very real. The plant makes and supplies components to Volvo assembly plants in Gent, Belgium, and Torslanda, Sweden. Technicians at the components facility, who are responsible for around 600 robots, need to ensure that these operated without interruption all year round.
They have addressed this issue by having many of their robots switch from using external cable dress packs to ABB’s Integrated DressPack solution. The irregular swinging of externally mounted cables can accelerate wear and tear, and cause breakdowns. The integrated DressPack routes the process cables inside the upper arm and through the robot wrist. This solution eliminates the issue with cables swinging and increases the service life of these parts, reducing overall maintenance. They are also protected from weld spatters, heat and collisions. It’s claimed the service life is increased to six to eight years in a three shift operation, compared with one to two years for an external dress pack.

From 2005, when an Integrated DressPack was installed on the first robot, to March 2012, there have been only five breakdowns at Olofström. Today the facility has around 200 robots that are fitted with Integrated DressPacks. Volvo Cars performs 3D simulations on almost 100% of its equipment, which is only possible with the internal dress pack, whose movements are predictable with total accuracy. The data collected from the simulation is used to maximize floor space without worrying about collisions.

Another benefit is that the Integrated DressPack’s modular design allows for a quick and easy 20-minute cable change, if necessary. “One of the big advantages of the Integrated DressPack option is that it is standard and optimised and thus does not require individual settings per robot,” says Torbjorn Albertsson, spot welding product manager at ABB Robotics.