Breaking the mould: Grainger & Worrall go beyond the block

With the onset of the EV age, casting specialists are demonstrating versatility and diversifying away from engine block production. AMS reports on the solutions Grainger & Worrall has developed to produce its new generation of cast parts 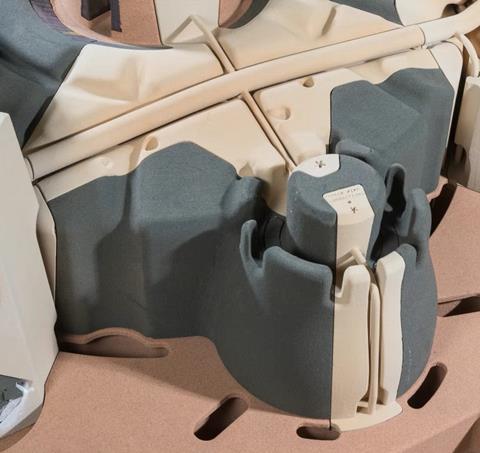 There have been big changes at Grainger & Worrall in recent years, as sales director Phil Ward makes clear. “We used to be known for engine blocks but that is now an increasingly small part of our business,” he states.

“It has gone from being 70-80% engine castings to 70-80% other things. There really has been a radical change in the market and we are increasingly designing, specifying, simulating and analysing as well as making engine castings.”

This change has been driven by the increasing importance and presence of electric vehicles (EVs) in the output of the OEMs that make up Grainger & Worrall’s customer base. Ward is explicit on the point. “Electrification-related elements such as battery trays and electric drive unit housings are new for everybody,” he states.

For Grainger & Worrall, the move to electrification represents a mix of continuity and change. Castings, Ward explains, remain the main type of product involved, but the technical requirements associated with them are more stringent.

“Castings are a great solution but those for EVs pose different requirement to those for internal combustion (IC) engines,” he states. “IC units are mostly about peak hardness and strength and performance at temperature. But EV castings don’t have same temperature requirements, instead, a key attribute is ductility for crash worthiness.”

One example of where the company’s previous experience provides it with some degree of continuity is the electric drive unit (EDU) housing that contains the electric motor.

“Some of the market is going down the route of integrating parts, so EDUs are becoming very complex with cavities and cooling channels analogous to those you might find in the cylinder blocks and heads in IC engines,” explains Ward.

“Decades ago prototypes were very approximate and did not utilise the right materials or tooling. But prototyping now means looking to use prototypes that provide relevant comparisons”

One way the company has had to adapt to the challenges involved has been to increase its competence and range of offerings in terms of material compositions. “We are doing lots of work in alloy development and heat treatments to give the right properties and to replicate what you will see in production parts,” Ward says. But, in addition, the company has been investing heavily for several years now – at least £6m ($7.9m) – in re-equipping itself, or at least augmenting existing resources in terms of both production and quality control technologies.

One of the first areas for attention was the basic technique of casting itself. As Ward confirms, the company introduced additive ‘sand-printing’ to make moulds for casting parts over four years ago. Previously the company relied on the well-established methodology involving the machining of a reusable metal or plastic tool, which acts as a ‘positive’ geometric replica of the intended final part and is used as a former to create a single-use sand mould ‘negative’ into which molten metal is poured to make final part.

In contrast with sand-printing, Ward says, “we just directly print the ‘negative’, which means that making a unique disposable mould for every single part is now at a price point where it is a feasible option.” But, as he further explains, additive sand-printing also has a “geometry bonus” in that it facilitates the production of moulds that would have been difficult or impossible to create otherwise.

“With sand-printing we don’t need to consider draft taper or joint lines,” he states. “In addition, it allows the combining of what would previously have been separate cores into one piece.”

The company now runs three sand-printing systems from supplier ExOne – two S-Print machines that “can create really fine internal geometries” and also an S-Max machine that “can create larger external parts.” The respective build envelopes for the machines are 800x500x400mm and 1,800x1,000x700mm.

But, Ward stresses, more is involved than just feeding in the dimensional data for the required parts and pressing a button. Instead, making the most of the technology involves fine-tuning it on the basis of experience, with a key factor being the correct mixing of the sand with an accompanying heat-resistant resin that ensures the right shape is maintained during the casting process. “We run our own set of parameters, including the sand mix and resin proportion, so our processes are unique to us,” he states.

More recently the company has made investments to support procedures that precede and follow the creation of moulds and the casting of parts. In the first case it has spent £1.5m on two partially-automated melting towers that not only boost material processing capacity from 800kg to two tonnes of dual alloy ingots per hour, but also enhance energy consumption, increase operator safety through the use of robot pouring techniques, and provide full traceability of operational parameters to support process optimisation.

In the second, it has acquired a third CT scanner to support the inspection of parts and prototypes, bringing its total investment in this technology to some £1.2m. The new machine, which sits alongside its two predecessors in a climate-controlled room, offers larger part size and weight capabilities – in this case up to 750x450x450mm and 125kg – and increases throughput capacity by 50%.

Ward says a CT ‘integrity scan’ enables skilled operators checking the resulting images to detect differences in density anywhere in a part that may be caused by shrinkage, bubbles or inclusions. He adds that the scan data can be reconstituted into a 3D model to facilitate comparison of the part under inspection and the initial reference design in the company’s CAD database. “We can see the details of every internal and external surface,” he states. “The CT scan data is accurate to within 0.2-0.3mm and what previously took days can now be done within 24 hours.” The technology also has the bonus of being non-destructive. 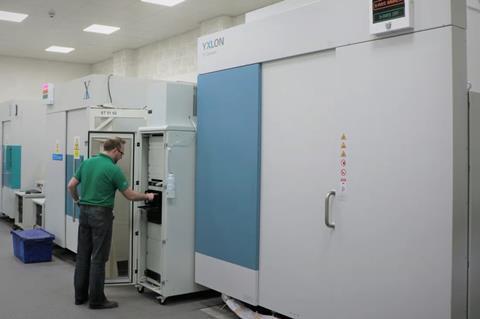 A third CT scanner supports inspection of parts and prototypes, bringing Grainger & Worrall’s total investment in this technology to £1.2m

Nevertheless, Ward notes the sophistication of the technology does not obviate the fact that interpretation of its output still relies on human skill. “Automatic defect detection software is available but doesn’t work to the level we require,” he explains.

So how will Grainger & Worrall work with these and other technologies to service what Ward describes as its customers’ “increasingly interesting” requirements? Perhaps, though, a better word would be ‘unprecedented’ because, as Ward further explains, it is a market that is still taking shape and for which there is limited previous relevant experience. A major factor, he observes, is that the EV market is not only creating new technical demands for the parts and components it requires, but is also providing the opportunity for companies with no previous track record in the automotive industry to become vehicle developers and assemblers.

Ward says that for Grainger & Worrall this means not just supplying new types of parts, but also increasingly acting as a “ramp and bridge” supplier in which it also acts as a source of initial production volumes of parts as well as prototypes. “We can do, say, ten prototypes, then pre-production volumes of perhaps a hundred parts, but can then support ramp-up phases by providing perhaps a thousand parts in year one and up to three thousand in year two,” he states.  “Because they are such new product types, existing tier one suppliers often cannot fulfil those requirements and instead become a bottleneck, but we have got the scale to overcome that.” It is a trend, he adds, that has perceptibly “accelerated over last two to three years.”

Grainger & Worrall’s engineering and technology director, Keith Denholm, confirms the company’s shift, focusing on its Make Like Production concept. Essentially this means making prototypes that correspond to the intended final production part in terms of their behaviour when subject to the same external forces and influences they might experience in use – impact resistance being the most obvious example. 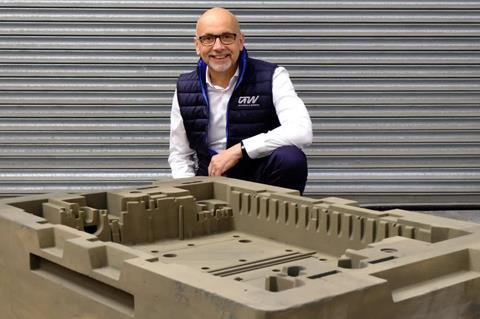 As Denholm explains, this involves slightly altering the material composition of prototypes compared with that of the intended final part in order to allow for the ways the different techniques used to make them will have influenced their characteristics. “Decades ago prototypes were very approximate and did not utilise the right materials or tooling,” he states. “But prototyping now means looking to use prototypes that provide relevant comparisons.” So, for castings that means making use of sand-printing as the actual mould making technique, then chemistry starts to enter the equation to take account of sandcasting being used as the production technique rather than diecasting.

“We have probably got 10 to 12 metals, principally aluminium, but some ferrous steels and irons that we can use as the basis to create special alloys to deliver functional prototypes,” Denholm states.  “The key difference between sandcasting and diecasting that has to be compensated for is their respective cooling rates, because sandcasting does not support cooling as quickly as diecasting, so you end up with a different intrinsic product quality.”

Over the last five years the company has built up a greatly augmented internal resource in materials expertise. “We have now got a metallurgical team with two doctorates and two PhDs,” Denholm reports.

Generally, he adds, the differences in final product quality generated by sandcasting or diecasting are to the detriment of sandcast items. But, as he also points out, the ability of that technique to allow for the quick and easy creation of different mould geometries for successive casting processes does mean that it facilitates product design iteration as a means of enhancing final product quality.

“The key difference between sandcasting and diecasting that has to be compensated for is [that] sandcasting does not support cooling as quickly as diecasting, so you end up with a different intrinsic product quality.”

Working with the ‘start-ups’

Denholm also stresses the importance of these capabilities in meeting the demands of a market – that for EVs – characterised by the presence of numerous new start-up vehicle developers with little or no previous experience in automotive manufacturing, seeking to meet highly compressed development timescales. “They often have a business plan that requires them to go from initial start to market in two years; that is just not long enough to build tools and do the required testing in the older way,” he states. 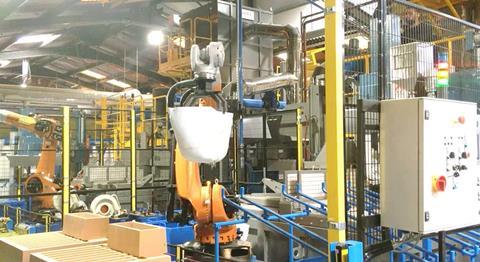 As such there has been a drive to develop appropriate ‘soft’ processes that can achieve procedures that provide both the necessary rapidity and predictive performance accuracy. Denholm adds that doing so also requires some specialised skill simply in the way the molten metal is poured during the casting process. “We’ve got clever ways of doing that,” he states. But whether in materials or process, he also confirms that the company keeps the knowledge involved in-house and does not look to protect it by formal means such as patenting or copyrighting.

Nevertheless, Grainger & Worrall is now looking to establish a new body of manufacturing expertise, additive manufacturing, through working with an external source rather than internal development. “We are moving rapidly towards a partnership with a company in Germany that has gone through the learning curve with that technology,” Denholm confirms. Significantly, he adds that the company is not a service bureau but another automotive component supplier that, though smaller than Grainer & Worrall, bears an “uncanny resemblance to us”.

Denholm says the company opted for this tactic because it determined that “the biggest barrier to entry into the use of that technology is the learning curve, so the best way to mitigate that is to form an appropriate partnership.”

Going forward, he adds, Grainger & Worrall will be looking to find “high-value opportunities” in which it can exploit its intended new area of expertise not just to make parts but also “to do materials and process development, so we won’t be looking for sheer scale.”