With the coronavirus pandemic causing a level of automotive plant shutdowns not seen since the second world war, suppliers and logistics providers will face failures without direct support from government, and close collaboration with OEMs and industry. 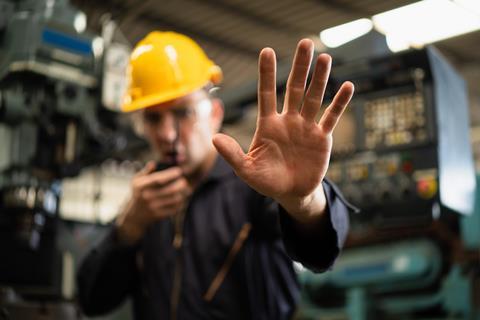 Measures to contain the coronavirus global pandemic in Europe and North America have decimated the automotive supply chain over the past week. Automotive suppliers and logistics providers face an unprecedented disruption to their operations and livelihood, with many likely to depend on government and industry support to survive.

If many firms go to the wall, the automotive sector will be dealt another blow as it struggles to resume operations and respond to eventual recovery.

OEMs have announced the temporary shutdowns of the vast majority of vehicle assembly and component plants in the European Union and the UK, including for Volkswagen Group, PSA, FCA, the Renault Nissan Mitsubishi Alliance, Hyundai-Kia, Ford, BMW, Daimler, Jaguar Land Rover and Volvo Cars. Whilst most shutdowns have been officially set for around 2-4 weeks, many will likely last at least as long as government-imposed lockdowns and quarantines – and may indeed last longer as OEMs align their supply chains to lower demand.

Major OEMs in the US and Canada have also idled plants, with two-week or longer closures at General Motors, Ford, FCA, Nissan, Toyota and Volvo Cars. Others, including Honda, Subaru and Volkswagen, are planning shorter shutdowns, but worsening situation in the US plants could prolong closures.

Managing such shutdowns is a huge feat in itself for the supply chain and will be just the first of many joint efforts needed to manage the crisis between manufacturers and their suppliers. Most OEMs will use the shutdowns to sanitise and disinfect work areas, but also oversee the maintenance of production equipment and handling of dangerous or hazardous materials. They will also still need to account for inbound supplies arriving in the coming weeks, as well as protecting finished vehicles. The sort of work usually done during shutdown periods – such as retooling and modernising – is highly unlikely.

Managing this idle time in a way that allows for a relatively swift return to production later will be a significant challenge – and potential drag on future recovery if not done carefully.

Only a few left standing

In Europe, the closures are largely a result of countries implementing largescale lockdowns and quarantines, including Italy, France, Belgium and Spain, with the UK, Germany, Austria, Poland, the Czech Republic, Slovakia, Hungary and others closing borders and restricting peoples’ movement and interaction. Such limits have not specifically restricted goods and freight movements, however automotive manufacturers have largely stopped operations because of both labour shortages and severe impacts to vehicle demand.

At this point, there appear to be only a handful of factories in Europe that have not suspended or plan to halt production. This week, Jaguar Land Rover’s factories in the UK and Slovakia were still operating, but all will shut from next week (March 23rd) for about a month. Volkswagen Group’s Bentley factory had also remained open several days longer but has now also shut.

Volvo Car factories in Sweden were also still producing this week, although it had stopped output at its plant in Ghent, Belgium; as of next week, its plants in Sweden will also close.

Many suppliers and providers will ultimately require OEM support as well to stay afloat, especially maintaining contracts and payment terms to keep the banks at bay

The Volkswagen Group is suspending production across Europe, attempting to do so in a coordinated way. That has meant that some plants have continued operations this week – such as its plant in Portugal – but almost all will soon halt lines, including across passenger and commercial vehicle brands.

While Ford and Toyota have stopped production in Turkey, a number of plants there were also still open this week, including Fiat and Renault’s joint venture plants, as well as Honda and Hyundai.

Any remaining European production is at considerable risk from parts shortages. And with demand likely in freefall, most OEMs are likely to halt remaining lines over the coming days.

Plants that depend on European supply chains and vehicle export to Europe are also closing. Renault suspended production at its two plants in Morocco, which primarily serve European markets. BMW has shut its plant in South Africa along with European plants. Volvo also closed its South Carolina factory.

Shortages of parts from Europe and difficulty exporting vehicles have led Audi to suspend production at its plant in Mexico. The Mercedes-Benz plant in Alabama is also expected to run short of parts, while BMW and Volkswagen’s US plants could face similar situations.

While Russian production has mostly continued, manufacturers such as Avtovaz – part of the Renault-Nissan-Mitsubishi Alliance – have pointed to challenges with labour and parts shortages, including from China. With Europe plants offline, it is likely that plants for brands including Volkswagen, Renault and PSA will face further shortages. 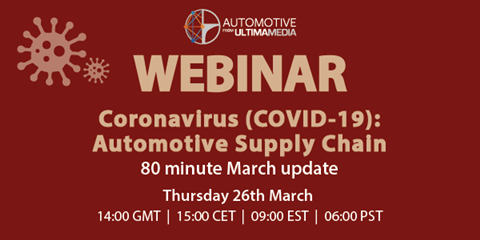 The situation is already having a devasting impact on financial and job markets, with vehicle sales likely to slow to a trickle across heavily affected areas. ECG Business Intelligence initially forecasted a worst-case drop in European vehicle sales of 17% compared to 2019. Automotive from Ultima Media will release an updated forecast next week, but we anticipate an even sharper fall as a result of short-term demand shock lasting several months hitting hardest first in Europe followed by the US.

There are some positive indicators, however, at least for post recovery. China now seems largely to have the virus under control, with few new cases and economic and industrial activity restarting. American and European government have ramped up measures to contain the virus, as well as unleashing financial support and stimulus on a tremendous scale. A global recession is now all but inevitable, but if the pandemic’s rise can be flattened, with jobs and demand supported, a depression can be avoided.

Governments including France and the US have already indicated they would support industries like the automotive sector, with EU policymakers seemingly prepared to loosen state-aid rules. That could help large OEMs, but there will be many questions about smaller tier suppliers, as well as many logistics providers and carriers. Idled fleets and staff can quickly wither away. The longer any shutdown goes on for, the more workers will be lost, and the more small and medium-sized companies will fail. 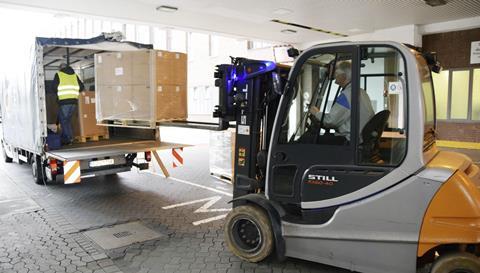 OEMs and suppliers are participating in the crisis effort with plans to produce and supply ventilators, as well as facemasks

The 2008 financial crisis saw many logistics carriers struggle and disappear over a period of sharp decline and then stagnation. This situation could be very different, as the industry has not faced a wholesale shutdown since the second world war. It is too soon to predict how long it will last, but six weeks would likely lead to significant business failures. Longer would cripple economies completely and could well see one or more major carmaker go down – and many suppliers with it. Government bailouts or even nationalisation would not be out of the question.

Suppliers and logistics providers will need to act now to ensure survival, both in terms of reducing fixed costs and idling capacity, as well as taking advantage of government loans and tax breaks. Even more direct government support will also be likely. Some will look to new business areas if they can – or perhaps even join in crisis efforts, whether producing or delivering medical equipment, for example. OEMs and suppliers in Europe and North America are gearing up to produce and supply ventilators; the Volkswagen Group is delivering facemasks. Logistics providers in particular has plenty to offer here.

However, many suppliers and providers will ultimately require OEM support as well to stay afloat, especially maintaining contracts and payment terms to keep the banks at bay.

In the long run, that will benefit OEMs as well when they turn the supply base back on. The question is, whether companies will be able to see that far ahead in the current maelstrom?

We think it vital that they do.

ECG Business Intelligence is a new collaboration between the Association of European Vehicle Logistics (ECG) and Automotive from Ultima Media to provide ECG members and partners with valuable data and analysis on market and regulatory issues, specific to the vehicle logistics sector. In collaboration with Automotive from Ultima Media, the business intelligence unit of Ultima Media and Automotive Manufacturing Solutions, ECG Business Intelligence will offer its members a series of reports and briefings to keep them fully informed, with pertinent facts and insights, on important sector developments.