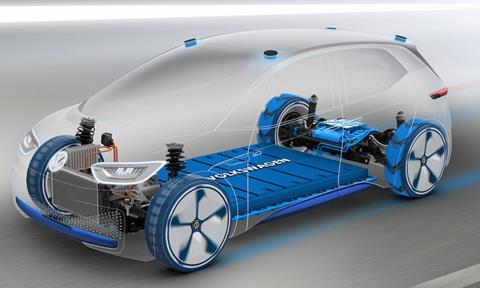 The Volkswagen Group has appointed its battery technology chief Frank Blome to run a new company which will oversee battery development and production in Europe.

The automaker also named the five internal hires who will work alongside Blome from July 1 as heads of operations, finance, technology and purchasing.

The new enterprise, whose legal name is being finalised, will be based at Salzgitter in northern Germany, a site which is already the group’s hub for battery operations.

“We have set up one of the most competent battery teams in the world and are therefore at the forefront of the competition,” group CEO Herbert Diess said in VW’s press statement.

“Volkswagen has the size and clout to secure the ramp-up of its e-mobility strategy with its own battery roadmap.”

The German carmaker is seeking to capture more of the value in electric vehicle sales by producing its own battery cells, the single most expensive part of the zero emissions vehicles.

The company announced in March that it would have six battery cell ‘gigafactories’ by the end of this decade and expand its partnership with Swedish cell manufacturer Northvolt.

In-house battery production offers strategic benefits such as greater control over supply chains as competition for battery cells and the materials used to make them, heats up.

The carmaker announced last year that it would run a battery recycling pilot from Salzgitter to develop a process for recovery of the valuable metals. Around 3,600 batteries will be recycled each year until the end of the decade when the current surge in EVs will start to translate into higher volumes of end-of-life batteries coming available.

CEO Blome, an electrical engineer, joined Volkswagen group in 2018 and became head of its battery division in 2020. He held various roles at parts maker Continental earlier in his career.

The chief technology officer, Soonho Ahn, will head up technological and product development. The South Korean chemical engineer has management experience at two of the world’s most prominent Lithium-ion battery cell manufacturers – LG Chem and Samsung SDI. Ahn is currently the CTO of VW’s battery division.

The chief purchasing officer will be Jorg Teichmann who has headed component procurement for the VW Group since 2021 after joining the company in 2016 as head of value engineering.

The new battery company’s CFO will be Kai Alexander Muller, an engineer with broad banking experience who joined the VW Group at the start of 2022 as CFO of its battery division. Sebastian Krapoth, who has worked for VW since 2014, will become chief human resources officer.

VW’s careers website features a new section for battery-focused roles with opportunities in its new ‘Battery Valley’, the cluster of its Salzgitter, Brunswick and Wolfsburg sites which are all about a 30-minute drive, or less, apart.

The Salzgitter battery team will grow to about 1,200 employees from 750, with about half of new roles to be filled by external hires, Volkswagen said.