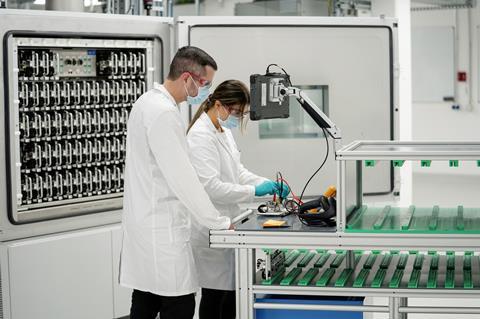 Volkswagen has launched its global battery making division, PowerCo, in which it will invest more than €20 billion ($20.3 billion) through 2030 in six European battery gigafactories and possibly more in North America.

PowerCo expects to reach the same amount in annual sales and its forthcoming plants will create around 20,000 jobs in Europe, Volkswagen said in a statement.

Echoing the trend for process standardisation embedded in the concept of connected, digitalised factories, PowerCo plants will all be conceived based on the blueprint for the headquarter plant to be built in Salzgitter, Germany.

This standardisation idea covers equipment, buildings and infrastructure as well as products, processes and IT and it will make it simpler to adjust processes or introduce new products to manufacturing lines simultaneously.

“We will be standardising on the basis of European standards and upscaling. This way, we will combine speed and cost optimisation with the highest quality levels,” said PowerCo CEO Frank Blome, an electrical engineer and until now VW’s head of battery technology.

The company aims to produce a ‘green unified’ battery cell from renewable electricity and to recycle more than 90% of its batteries at end-of-life. PowerCo will take responsibility for all aspects of the battery supply chain.

“Today is a good day for the automotive industry in Germany and Europe,” German Chancellor Olaf Scholz said at a July 7 ceremony to break ground on the Salzgitter plant.

“Volkswagen is showing how the future of sustainable, climate-compatible mobility could look. Together, we are laying the foundation for shaping this future to a significant extent in Salzgitter.”

PowerCo in Salzgitter will lead in development of cell technology, sourcing of raw materials and the supply of machinery to factories and later branch into grid-scale energy storage projects. The next factory is planned for Valencia, Spain while the location of three others is yet to be decided as is the establishment of production facilities in North America.

Volkswagen hopes its prismatic unified cell innovation revealed in 2021 can cut battery cell costs by up to 50%, which would go a long way towards tackling the price obstacle for consumers in adoption of zero emission cars.

The prismatic unified cell can be produced with a range of different chemistries and will be used in up to 80% of the group’s models. Their production will start in Salzgitter from 2025.

That plant will eventually reach 40 GWh (gigawatt hours) of annual battery output, enough for 500,000 vehicles. The eventual six cell factories will have 240 GWh capacity by 2030, which, based on the Salzgitter figure, would be enough for 3m electric vehicles each year. Earlier this year, Volkswagen Group announced that it would build a battery factory in Spain.

Join the AMS Evolution Livestream on July 28 for insight on how EV batteries are transforming EV powertrain production, featuring founder of Italvolt and Statevolt, Lars Carlstrom.