Volkswagen AG and Spanish OEM SEAT S.A will be investing €10 billion ($10.6 billion) into a huge electrification strategy in Spain, supporting the localisation of electric vehicle and battery output. 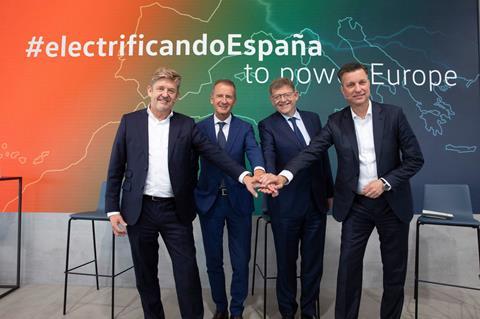 Seat and VW agree to invest in the electrification of Spain

The German carmaker previously said it would invest €7 billion in constructing the battery plant and produce electric vehicles at its two existing car factories in Spain. That figure has now been raised to €10 billion with new partners on board, according to VW CEO Herbert Diess.

“We will electrify the second-largest car producer in Europe (Spain) with a new giga-factory for batteries and the production of electric cars in two plants,” Diess told an event in Sagunto, adding the plan was to create “a full ecosystem of suppliers from lithium extraction to the assembly of batteries”.

VW will also be entering into a partnership deal with Spain’s largest power utility firm Iberdrola. The Bilbao-based company plans to construct a solar park to support the battery plant set to be built in the municipality of Sagunto near Valencia.

VW aims to begin serial production at the 40GWh plant by 2026.

The company will invest €3 billion in the plant in Sagunto, a further €3 billion in four SEAT factories, including the Martorell plant near Barcelona, and €1 billion in Pamplona.

“The battery factory in Sagunto will occupy a 200-hectare site and will be the third of six Gigafactories the Group plans to build across Europe,” board of management member Thomas Schmall said.

For the battery ramp-up in Spain and Europe, sustainability and a closed value chain loop have become central. The electricity to supply the Gigafactory will come 100% from renewable energies, with a local-for-local approach and by recovering valuable raw materials on-site, the new factory in Valencia will be a blueprint for circular economy.

“We see Spain and Iberia as a competitive and attractive location for cell manufacturing due to beneficial operating premises including cost,” “We have analysed economic circumstances extensively,” a VW spokesperson said. “Valencia has made it on top of the list due to numerous valuable assets important for a cell factory: good logistic connections with the harbour and the highway, universities, qualified workforce, etc.”

Battery, which amounts to 40% of the value of an EV, and the aim to electrify Spain removes potential risks from the supply chain for EV development.

The spokesperson added: “Volkswagen has implemented battery cell development and production (as well as charging and energy) as core business areas in the transition into e-mobility.”

“In addition to the unified cell concept and the consistent expansion of in-house production from 2023 on, we will also focus on integrating more steps along the value chain all the way through to industrial recycling - a sustainable approach for our rising battery cell demand in the EV run-up,” the spokesperson said.

Both VW and SEAT are involved in the Future: Fast Forward project and have applied to the Strategic Project for Economic Recovery and Transformation program (in Spanish, PERTE) for the Electric and Connected Vehicle (in Spanish, VEC), hoping to turn Spain into a hub for electric vehicles in Europe. The business grouping is the largest from the automotive industry in Spain, with 62 national and international companies and benchmark firms from different sectors involved.

If a positive outcome of the PERTE submission materialises and the finalisation of the permits, the PERTE funds will support the company’s ambition of turning Spain into a European hub for electric vehicles, Schmall said.