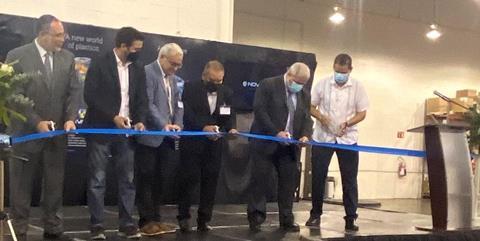 The company says the 8,014sq m plant will be equipped with new machinery such as a CVT extrusion machine for producing electric car battery cooling system parts and will consolidate its tube assembly production in one site, transferring these operations from its Richmond, Wisconsin, facility and from its nearby existing site in Santa Ana. The plant, which was inaugurated on April 21st, will employ around 400 people.

Commenting at inauguration, Pierre Boulet – Novares CEO said: “This is a significant investment by Novares in our Mexican production facilities, designed to bring this activity under one roof and concentrate our expertise in one place, optimising costs and benefits for our customers. The site is 100km south of the US border, simplifying supply chains to the North American market. The site will bring more opportunities for local employment and a new chapter in our Mexican manufacturing journey.”

Novares has also been applying its expertise in plastic components to hydrogen fuel cells. In recent AMS article Luc Dornier, senior vice president group product development, explained that while the company has no intention of becoming fuel cell manufacturer it does see that area as offering the potential to exploit one of the advantages plastic materials – weight reduction. It has already developed its first product aimed specifically at this objective – endplates for fuel cell stacks made from injection moulded PPS material with a glass fibre infill.

Dornier also noted that in fuel cell systems the company see the potential not just for the end plates but also for what he described as much of the surrounding “balance of plant” including filters, manifolds and intakes. He confirmed that the company already has “several other fuel cell related projects” underway.