Throughout the age of the mass-produced automobile, steel has been the principal material of choice for vehicle structures. Will it maintain its dominance as carmakers pursue new mobility concepts? 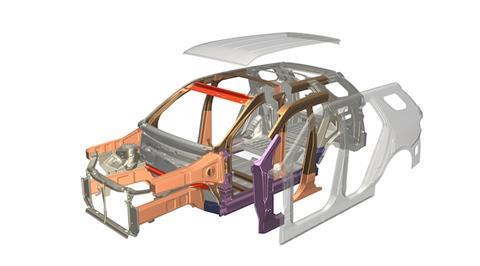 As cars become increasingly connected, automated, shared and electrified (CASE), it could be strongly argued that the automotive industry will change more in the next decade or so than it has in the preceding century.

Strong, stiff, relatively inexpensive and easy-to-join, steel has been a mainstay of vehicle manufacture since the concepts of mass-production were pioneered by Henry Ford, but will it maintain its dominance as carmakers embrace the future, and how will the use of the metal change?

While the widespread adoption of autonomous vehicles may still be a few years off, the electrification of automotive powertrains is well underway. Indeed, a recent report put together by market research company BloombergNEF (BNEF) predicts that electric vehicles (EVs) will account for 57% of passenger car sales globally by 2040. Indeed, BNEF expects that sales of passenger EVs will rise from two million worldwide in 2018 to 28 million in 2030, and 56 million by 2040. Meanwhile conventional passenger vehicle sales fall to 42 million by 2040, from around 85 million in 2018.

The main driver for this increase in EV sales, according to BNEF, will be a sharp decline in the costs of the batteries used in these vehicles, which will make them cheaper than internal combustion engine (ICE)-powered alternatives by the mid-to-late 2020s in almost every market, on the basis of both lifetime and upfront costs.

Anti-intrusion performance of bodysides has to be improved to protect EV battery packs and, ultimately, passengers

Since 2010, the average cost of lithium-ion batteries per kilowatt-hour has fallen by 85% owing to the exploitation of economies of scale in their manufacture and improvements in technology.

Environmental legislation was one of the primary motives for the automotive industry to explore the use of alternative drivetrains. The European Union (EU), for example, has mandated that new cars can emit no more than 130g of carbon dioxide per kilometre travelled. This target will be lowered to 95g per kilometre in 2021, phased in from this year, and is likely to get even more stringent in 2030.

Meanwhile, innovation, and indeed profits, in the automotive materials industry have been driven by the need for lighter and/or stronger products that allow carmakers to reduce the mass of their vehicles—helping them to hit these targets. These demands have, in the last couple of decades, pushed carmakers into using lighter-weight, but more expensive, alternatives to steel—such as aluminium and carbon fibre-reinforced plastics (CFRPs).

But EVs, in effect, produce no tailpipe emissions, which throws up a number of interesting questions. First, do these vehicles still need to be light in weight? Jérôme Favero is head of automotive steel solutions at ArcelorMittal Global research and development. He says: “In the past few years this question was really open, and there were a lot of discussions. All of these concluded that, for EVs, saving weight is not really that important.”

The principal logic behind this thinking was that the range of EVs could be extended through the use of systems that recover energy during braking, making the costs and efforts associated with shaving a few kilogrammes of weight from their body structures unnecessary.

That thinking has since changed. Favero continues: “The automotive industry now seems to be convinced that lightweighting remains a major topic for body-in-white design. There are indeed several drivers that make saving weight attractive, the most important being the need to increase the range an EV can travel on a single charge of its battery, and the environmental impact of the materials being used.

Even if energy is recovered when an EV brakes, losses will nevertheless occur, so if it is lighter, the overall amount of energy needed to move it is reduced”. He adds that an EV’s performance parameters, such as the rate at which it can accelerate and how it feels to drive, are also improved when it is lighter in weight.

Over the last two decades, steelmakers have worked hard to develop stronger grades that enable carmakers to produce lighter parts for ICE vehicles. With the increasing electrification of automotive drivetrains, what new applications could there be for strong and formable steels? 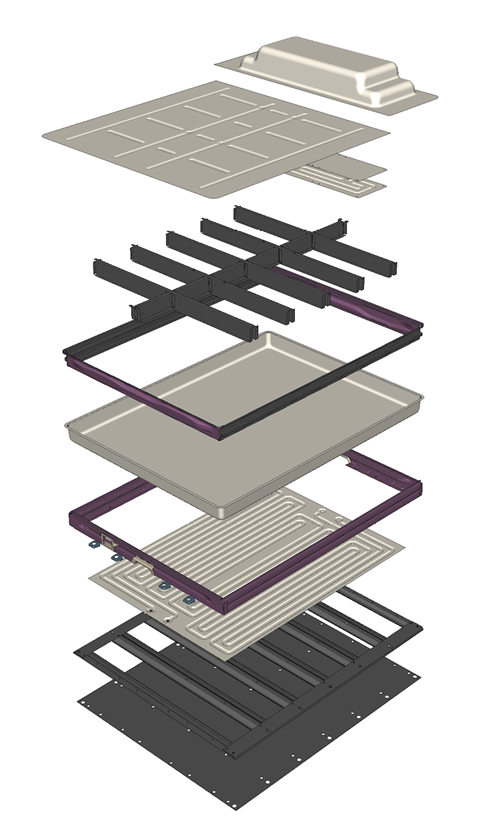 Within an EV context, the steel industry is looking to double-down on advantage in cost, performance and sustainability

Favero says: “The range of a battery EVs is one of the most important criteria for consumers. OEMs are developing strategies to increase the range of these vehicles, and are therefore maximizing the space available for batteries”.

As a consequence, he says, the space that would be available for energy absorption in the case of a crash in an ICE vehicle is being partially taken-up by batteries in EVs. As a result, the anti-intrusion performance of bodysides has to be improved to protect these battery packs and, ultimately, passengers.

Favero believes that roll-formable martensitic advanced high-strength steels (AHSS) are ideal for these applications. Further, he points out that EVs are currently more expensive to manufacture than their ICE counterparts; steels strike the right balance between performance, mass and cost.

With the adoption of EVs set to increase sharply, current environmental legislation based on fuel efficiency and carbon dioxide emissions is beginning to show its limits, according to the head of marketing, sustainability, at ArcelorMittal Global Automotive and Mobility Solutions, Frédéric Painchault.

For instance, the technologies and fuels used to generate the electricity that powers EVs can have a dramatic impact on the carbon dioxide emissions produced as they are driven. These indirect emissions are ignored by current regulations.

Further, as the environmental impact of the use of vehicles is reduced, the impacts of their production and disposal will likely come under increasing scrutiny. Indeed, in late 2018, the European Parliament recognised the importance of this life cycle thinking when assessing the environmental impact of the automotive industry beyond 2020, and will require carmakers to report the carbon dioxide emissions associated with the whole lifecycle of new cars from 2025.

The steel industry is now looking to double-down on this advantage. Painchault continues: “ArcelorMittal plans to significantly reduce its global production of carbon dioxide emissions, with the aim of being carbon neutral by 2050.”

The impacts of electrification on the automotive industry are profound, but it appears that the its reliance on steel is unlikely to change in the future. Perhaps more than ever, carmakers will need strong, affordable and environmentally responsible materials for the production of their vehicles, and steelmakers are positioning themselves to meet these demands.