Steel makes the case as the mainstay material for vehicles

With OEMs demanding vehicle-structure materials that are low in mass, crash-protective and economic to use, steel grades stay true to form 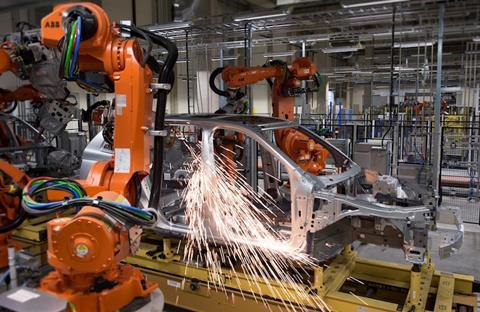 Steel may be something of an old dog in the automotive industry but, as we are learning, it can still be taught some new tricks.

Carmakers are increasingly demanding strong, lightweight and cost-effective materials for the construction of both their battery electric- and internal combustion engine (ICE)-powered vehicles.

Steelmakers the world over are responding to these demands by developing new grades and refining existing processes for the production of automotive parts from the metal.

Steel has been a mainstay of the automotive industry more or less since its inception and, despite competition from lighter-weight alternatives such as aluminium and carbon fibre-reinforced plastics (CFRPs) in recent years, it is still the most widely used material for the production of cars today. 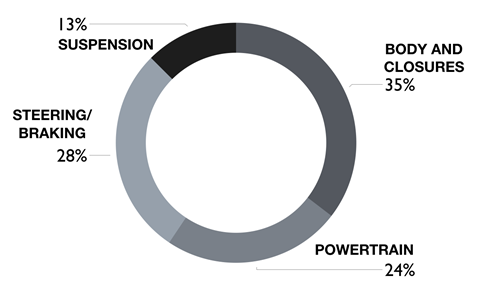 According to the International Organization of Motor Vehicle Manufacturers, 95.6 million vehicles were produced in 2018 and the World Steel Association says that, on average, each of these contained almost a tonne (900 kg) of steel.

World Steel Association points-out that advanced high-strength steels (AHSS) can make-up as much as 60% of the body structures of new vehicles. The Hyundai-Kia Group, for instance, produced more than 7.2 million vehicles in 2017, making it the third-largest carmaker in the world and, over the last few years, the company has intensified its use of AHSS.

The 2018 Accent, for instance, is the fifth generation of Hyundai’s sub-compact vehicle and its chassis comprises 54.5% AHSS—up from 41.5 % in the previous generation. Use of these metals has helped improve the Accent’s torsional rigidity by 32%, according to the carmaker. More than 50% of the chassis of latest version of the Tucson, meanwhile, is made from AHSS, compared with 18% in the previous model.

Finally, approximately 51% of the 2017 Kia Sportage’s body-in-white (BIW) is made from AHSS, a significant increase on its predecessor, only 18% of the BIW of which was made from AHSS. 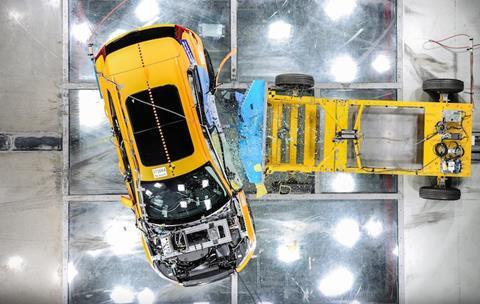 For the production of safety-critical components in particular, the use of hot-stamped ultra-high-strength steels (UHSS) has exploded in the last two decades. Hot stamping helps to solve a key problem with steels; as their strength increases, so their formability decreases.

Further, it eliminates the issue of spring-back. After a flat-rolled metal is cold-worked and as the forming force is released, the metal tends to revert to its original shape owing to its natural elastic properties. A number of factors, including tensile strength, yield strength after forming and thickness, influence this spring-back.

Using the hot-stamping process, a blank – usually made from boron steel – is heated in a furnace to its austenitising temperature of around 900°C, formed in an internally cooled die set, and quenched under pressure at a minimum cooling rate tailored to ensure the formation of a martensitic microstructure in the part. This microstructure imparts high strength—as high as 2000 MPa.

As such, very strong components can be produced using the process, or it can be used to create parts that demonstrate strengths equivalent to those cold-formed from conventional grades of steel, but with thinner gauges—enabling their weight to be reduced.

The results that can be achieved using hot-stamped UHSS are impressive. Volvo, for instance, uses the technology to produce the passenger safety cages for its XC90 and XC40 SUVs, both of which earned Top Safety Pick+ awards from the US Insurance Institute for Highway Safety (IIHS) in 2019.

As such, there is always demand for new grades of UHSS. Steelmaker ArcelorMittal, for instance, produces two ranges for hot stamping: Usibor and Ductibor. Owing to their high strength, Usibor steels are suitable for parts that must provide protection for passengers during a crash, while Ductibor steels are effective for parts that need to absorb energy during such impacts. 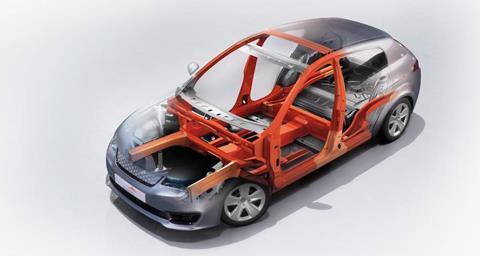 One of the latest additions to the Ductibor range is Ductibor 1000 (so called because it demonstrates a tensile strength of over 1000 MPa), which is designed for use in monolithic parts, such as front and rear rails, which require higher ductility than Usibor 1500 can provide. The new Ductibor grade can also be combined with Usibor in laser welded blanks.

In terms of mechanical properties, ArcelorMittal says that the new grade strikes a good balance between Usibor 1500 and Ductibor 500, and can be used in the same production processes. “The finely graduated strengths between these three grades allow OEMs to adjust and improve the function of the BIW while potentially achieving significant weight savings at the same time,” adds the head of ArcelorMittal’s Global R&D for Automotive, Jean-Luc Thirion.

Since Ductibor 1000 was unveiled at the end of 2017, Daimler has been looking do develop applications for the material. The carmaker is in the process of approving the UHSS but, with the long development cycles of the automotive industry, it could still be a few years before it uses the grade in its production vehicles.

Material developments can serve to make the hot stamping process more efficient. Thyssenkrupp, for instance, has developed a coating for its MBW manganese-boron steels that it says improves the reliability and quality of the parts produced.

Typically, these steels feature an aluminium/silicon coating that serves to prevent their decarburisation and scaling during heating, and to improve the corrosion resistance of components made from them.

However, during annealing in the furnace, the aluminium in the coating oxidises with water to yield hydrogen, which diffuses through the coating into the metal—where it can cause hydrogen embrittlement. This is usually countered through the precise control of the atmosphere in the furnace, or through the use of subsequent heat treatments, but both measures are energy-intensive and expensive.

Laser welding and resistance spot welding can be used on aluminium/silicon coated parts as usual, while their abrasion properties are unaffected and they remain easy to paint

Thyssenkrupp has developed an aluminium/silicon coating, called AS Pro, that contains a certain amount of magnesium. Using this coating, a magnesium oxide forms on the surface of the material surface that produces significantly less diffusible hydrogen as a by-product than a standard AS coating.

ThyssenKrupp’s experts validated these findings through extensive testing on production equipment and it says that the results are impressive. After hot forming, the hydrogen content of parts can be reduced by 40% or more compared with the use of conventional coatings, and a reduction in hydrogen absorption of as much as 70% is possible with flexibly rolled material.

AS Pro is more or less transparent to downstream processes. Joining techniques such as laser welding and resistance spot welding can be used on AS Pro-coated parts as usual, while their abrasion properties are unaffected and they remain easy to paint.

As carmakers continue to be incentivised to reduce the weight of their vehicles, either by environmental regulations governing fuel efficiency and carbon dioxide emissions, or by the need to compensate for heavy batteries, the demand for materials that are low in mass, provide protection in the event of a crash and are economic to use will continue to grow.