Helsinki-based Outokumpu says stainless steels are ideal for lightweight, safety-critical structural parts and have put it to use in the series production of EV battery enclosures

The use of stainless steel in the automotive industry has been typically limited to components in the exhaust line, but the corrosion-resistant metal demonstrates a number of properties that make it attractive for the manufacture of other parts, too.

Indeed, Ford produced a number of concept cars with stainless steel bodies from the 1930s through to the 1970s and, perhaps most famously, the DMC DeLorean featured stainless steel body panels mounted to its glass fibre-reinforced plastic monocoque. However, the wider adoption of stainless steel in such applications has been limited by a number of factors – principally its relatively high price. 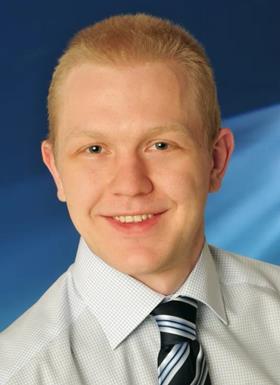 “For the first time, stainless steel can be used directly with other metals in car body engineering.”

This situation could be about to change. Since 2012, Finnish steel supplier Outokumpu has been developing a range of stainless steels that it says are ideal for the manufacture of lightweight, safety-critical structural parts and components with complex geometries.

The company says that not only do these metals possess the corrosion resistance that stainless steel is famous for, they are also strong, perform excellently in crash, demonstrate unique behaviour when formed and are highly resistant to heat. Owing to this formidable combination of properties, the materials are now being used in the series production of protective battery enclosures for a number of electric vehicles (EVs).

According to Outokumpu’s technical manager for automotive, Stefan Lindner, stainless steels – alloyed steels with a chromium content of over 10.5% – typically come in four varieties. These are:

The use of these stainless steels in structural applications has been limited to the low-volume parts such as reinforcing elements for axles and dampers. Lindner says that there are three reasons for this. Owing to the alloying elements used for its production, stainless steel is two-and-a-half to three times more expensive than traditional steel in purchasing.

By using manganese alloying elements, the cost is lower than those alloyed with nickel

Owing to its high strength and formability, austenitic stainless steel is the most likely candidate for structural applications, but its production requires a significant amount of nickel, which is traded on the London Exchange—ؙmaking its price highly volatile. Finally, when used in mixed-material constructions, the highly noble stainless steel can increase the likelihood of galvanic corrosion occurring in neighbouring materials. 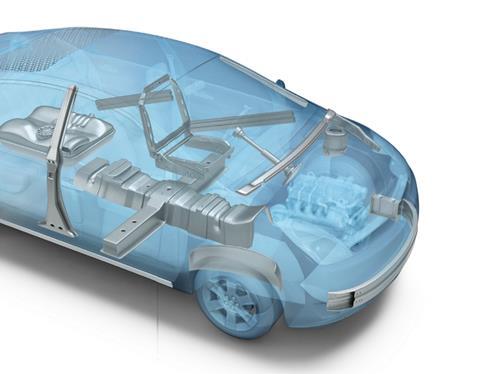 In 2012, Lindner and his colleagues at Outokumpu set out to solve these problems. He says: “Our goal was to create a stainless steel with a fully austenitic microstructure that is stable even after forming and welding. For this, we needed to use different alloying elements – in this case, manganese.”

By using manganese alloying elements, the cost is lower than those alloyed with nickel. Manganese is not traded on the London Exchange, so its price is stable. Further, manganese is highly ignoble, lowering the free electrochemical potential of stainless steels alloyed with it and thereby reducing their tendency to cause galvanic corrosion. Lindner adds: “As a result, for the first time, stainless steel can be used directly with other metals in car body engineering.” 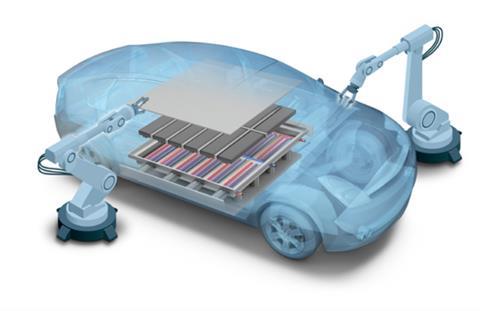 Lindner says: “They are strong materials and highly formable. Further, owing to twinning induced plasticity [TWIP, see below], the material will harden when a force is applied. During hydroforming, we have realised strengths of 2000 MPa”. This removes the need for hot forming, reducing the complexity and cost of part production.

Stainless steel’s high strength enables parts to be produced in thinner gauges than is possible using conventional steels, cutting their weight by some 30–40%. Further, this strength can be tailored across the part by strain-hardening different areas to different degrees. The material also hardens when exposed to the forces typical of crashes, providing high resistance to impacts while simultaneously absorbing the associated energy.

The steels retain their strength at temperatures of up to 300°C and they are not magnetic, meaning that they can be used for electric motor components such as shafts and shrouds. The steels are also highly resistant to flame and heat, essential properties for their use in EVs. Lindner explains: ”When we think about passenger safety, we usually only consider the strength and toughness of the material necessary for components made from it to withstand impacts. But with EVs, we must also think about its thermal properties.”

The batteries in EVs can catch fire if damaged in a crash, and this fire must be contained should passengers require rescue by emergency services. Aluminium melts at around 600°C and structures made from it can be completely destroyed after approximately five minutes of exposure to such a temperature.

Lindner continues: “Stainless steels are highly heat resistant, one of the reasons why they are used in exhaust systems, where they ensure that the components remain stable. Heat-resistant stainless steels will survive temperatures up to 1300°C for over 10 minutes, exhibiting only small levels of deflection.”

Lindner says that there are numerous other benefits associated with the use of stainless steels. A chromium oxide passivation layer forms on their surface, which eliminates the need for electrolytic zinc coating or galvanising. They do, however, require a cathodic dip coating (CDC). In combination with the CDC, the passivation layer provides protection from corrosion, even after a local lattice cut or stone chip; it will repassivate after mechanical damage.

Stainless steels can in most cases be used as drop-in replacements for conventional grades. Lindner says: “In general, you can use the same welding methods as before, but the parameters will need to be adjusted a little. Bonding and mechanical joining methods can also be used.”

Stainless steels are highly resistant to flame and heat, essential properties for use in EVs, battery protection is a prime example

Lindner adds: “To produce our stainless steels, we melt scrap in an electric arc furnace and add alloying elements to get the chemical composition that we need. We do not need a significant quantity of raw materials; in general, the recycled content of our steels is higher than 85%”. At the end of their working life, components made from stainless steel can be re-melted. Recycling routes for the metal are well established and its properties are not degraded by this process.

Further to being used to protect battery packs, Lindner says that stainless steels could be used for the production of structural and semi-structural parts such as cross members, B-pillars, control arms, strut towers and shock absorbers.

The introduction of any new material to the automotive industry represents a significant challenge. Indeed, it has taken Lindner and his colleagues some seven-to-eight years to achieve this. He says: “This timeline makes sense. Welding procedures parameters need to be developed and approved, forming tests have to be carried out, corrosion testing in the field has to be undertaken, the materials behaviour in crash must be simulated… All of this takes a lot of time and a lot of effort. But the results are materials that are well understood and, most importantly, safe.”

At room temperature, pure iron exists as ferrite. It transforms into austenite at temperatures above 911°C. However, alloying elements called austenite formers – such as nickel, manganese, cobalt or nitrogen – enable austenite to exist at room temperature. Because of their characteristic microstructure, austenitic steels possess different properties than ferritic steels.

There is a further crystal structure that results in another material important in steel—martensite. The fcc structure of austenite that exists at high temperatures allows carbon atoms to fit easily into the spaces between the iron atoms. In contrast, there is much less space for carbon atoms in the bcc ferrite structure. If a hot steel is cooled very quickly (quenched), the carbon atoms become trapped in the ferrite. The result is a distorted crystal structure that forms martensite. This is important as martensite is very hard and is a significant factor in the strengthening of steel.

One of the main influences on the hardening mechanism of austenitic steels is stacking fault energy (SFE), the energy necessary to create a stacking fault as a two-dimensional lattice defect on a crystal face. A material with an an SFE lower than 20 mJ/m² will form martensite during deformation—this is the transformation induced plasticity (TRIP) effect. On the other hand, steels with an SFE between 20 mJ/m² and 30 mJ/m² can be characterised by a massive twinning effect, called twinning induced plasticity (TWIP).