Putting in a shift

OEMs are keeping options open on transmission supply. Many are moving from an established in-house option and increasingly looking to source externally 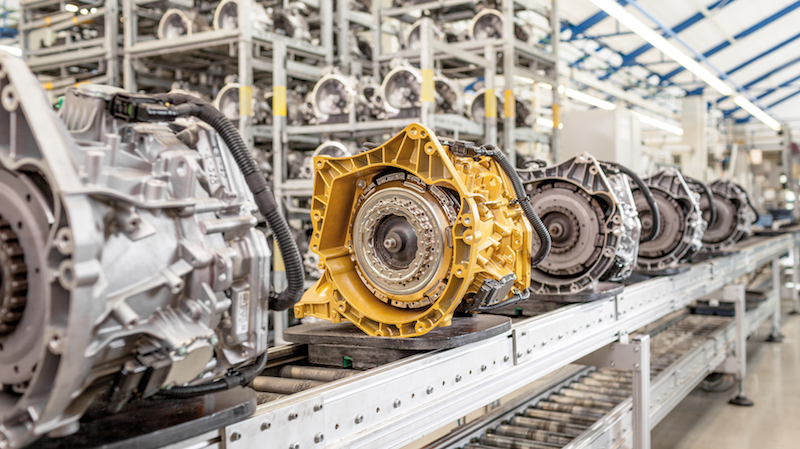 Body panels, engines and transmissions are the three fundamental component areas that the major car makers tend to produce in-house. However, behind this established pattern there is a changing supply network for transmissions which involves some of the world’s major component suppliers and on occasion the cross-supply between vehicle companies; for example, Mercedes-Benz transmissions used in Nissan and Infiniti models in North America. The situation in terms of in-house or external supply has shifted in favour of the suppliers in recent years with the increase in the use of continuously variable transmissions (CVTs) and dual clutch transmissions (DCTs) which in most cases are made externally.

Globally between 65-70% of the transmissions market is supplied in-house by the car companies, a ratio which has remained broadly stable in the recent past. However, as CVTs and especially DCTs grow in popularity, the likelihood is that the ratio supplied by external suppliers will grow. The deal that saw the sale of Getrag to Magna included the supply of Ford transmissions – through a Getrag-Ford JV – making it the most significant development in the supply structure for transmissions. Magna-Getrag is one of four major global suppliers of transmissions, the others being Aisin and JATCO of Japan and ZF. Together these four companies have the vast majority of the external market for transmissions. In addition, Hyundai-WIA supplies within Korea and there a number of specialist suppliers of sports transmissions in developed markets (such as Tremec which supplies manual transmissions for US sporty vehicles). There are also some other external suppliers in Japan, including Univance which supplies transmissions for Nissan SUVs in Japan and sells into various Japanese VMs from its plants in North America and Thailand. Another source is Yanagawa Seki which specialises in manual transmissions for kei cars.

Choosing in-house or external sourcingMost of the European vehicle manufacturers make their own transmissions. The major exception is BMW which sources many of its manual and all its DCTs transmissions from Getrag while most of its automatic transmissions come from ZF. Aisin supplies transmissions for Mini and some front-wheel-drive BMWs. Interestingly, for the i3 and i8 electric vehicles, a single speed gearbox is made by BMW itself in Germany. It seems likely that this business will grow as the i-series range widens.

In contrast to the situation at BMW where transmissions are sourced externally, at Mercedes almost all transmissions are produced in-house. In Germany its main transmissions plants are at Gaggenau and the sprawling Unterturkheim complex in Stuttgart. ZF supplies transmissions for the Mercedes light commercial vehicle range, but the passenger cars use in-house produced units. Two important developments here have been the inauguration of DCT production in-house in Stuttgart – for use on the A-class and derivatives made on the MFA platform – and the decision to open a transmissions factory in Romania to cope with rising Mercedes production. 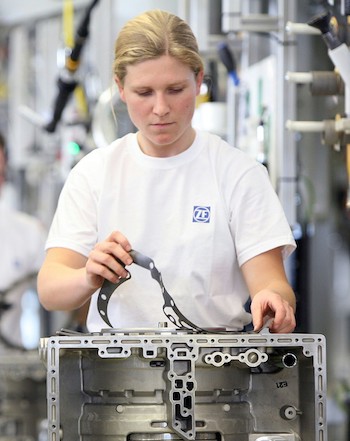 The Romanian plant has also taken on DCT production as fitment of this transmissions type has increased, and the factory also assembles Mercedes’ new nine-speed automatic transmission, from largely German produced components. Getrag supplies transmissions for the Smart range, both the ForTwo and the ForFour which is made by Renault (and whose equivalent model, the Twingo also uses Getrag).

Meanwhile at Fiat-Chrysler just over half of the group’s transmissions are made in-house; Fiat units are made at three plants in Italy and also in Betim in Brazil, while the Chrysler arm’s main transmissions operations take place at Kokomo in Indiana, where there are actually three factories making transmissions. In Europe, Fiat makes mainly manual transmissions, sourcing Aisin automatics when required.

In the US, Chrysler uses ZF transmissions and has a licence to produce a nine-speed ZF automatic unit. This has been subject to a recent recall owing the transmission slipping into neutral unexpectedly, a problem which has also affected Jaguar Land Rover which uses the transmission on the Evoque. Chrysler vehicles still use some Mercedes transmissions, a hangover from the days when DaimlerChrysler existed, but the volumes involved here are steadily declining.

At Ford the vast majority of transmissions have been sourced in-house, with the Ford-Getrag JV historically regarded as an in-house operation. These units should – especially now that Magna has acquired Getrag – be regarded more properly as externally supplied. In addition to the Getrag-Ford JV operation which has factories in France, Germany, Slovakia and the UK in particular, Ford has transmissions plants of its own in Brazil (where it makes manual units for local demand) and three automatic transmissions plants in the US, two in Michigan and one in Ohio.

Honda – in almost direct contrast to BMW – has traditionally made all its transmissions exclusively in-house. However, since 2014 the Acura brand has used the ZF nine-speed automatic transmission which is also used by Fiat Chrysler and Jaguar Land Rover. For Europe, Honda imports transmissions from Japan, Asia and North America, whereas in the USA it makes most of its transmission needs in its own plants in Mexico, Ohio and Georgia. The Ohio plant is one of the few vehicle manufacturer plants outside Japan which makes CVTs.

Honda has shown its development prowess in transmissions by filing a patent for an 11-speed multi-clutch unit; this was actually filed back in 2014 but news of this development only become public in the summer of 2016. Whether this will be used in a production vehicle remains to be seen – it has a 10-speed transmission which is due to come into use in the near future, but the company has not yet provided details regarding which models will use this (similarly both Ford and GM are reported to have 10-speed units in preparation).

Honda certainly illustrates very well the trend in recent years for an increased number of gears: as recently as 2012, Honda’s main volume models used five-speed automatics, so to move to up to 10 speeds within five years is remarkable. At the present time, its Acura models use seven-speed DCT units on the RLX sedan, while the ILX and TLX sedans have eight-speed DCTs and the NSX supercar, Honda’s halo model, currently uses as a nine-speed DCT. 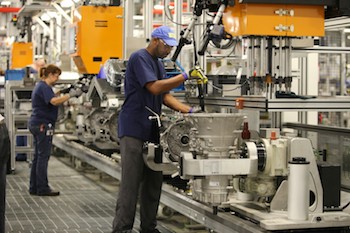 Globally between 65-70% of the transmissions market is in-house, however, external supplier are set to gain a greater share

In North America, where the Daimler-Renault-Nissan alliance has developed rapidly in recent years, Mercedes has licensed production of its nine-speed automatic transmissions to Nissan for use in Nissan and Infiniti models – these will actually be made by JATCO in Mexico. In Japan, Nissan’s in-house supply includes the former independent supplier Aichi.

Toyota is another of the vehicle companies which makes some of its transmissions itself – for example at Walbrzych in Poland for its European models – and also sources significant volumes from various Aisin divisions; Toyota has a majority stake in Aisin. The Polish plant supplies all of Toyota’s European plants – in the UK, France and Turkey. CVTs, mainly used in Japan, are made at Toyota’s Hokkaido plant. The company also has its own transmissions plants in the US, India and China for its factories in those markets.

At the Volkswagen group around four-fifths of its transmissions needs are made in-house; the balance comes from Aisin and ZF; ZF mainly supplies Audi as DCTs for Porsche. VW has substantial transmissions plants in Kassel, Germany (making both manual and automatic units), Bratislava in Slovakia, Mlada Boleslav and Vrchabli in Czech (the Vrchabli plant is VW’s main DCT plant) and also in Spain, in a SEAT factory in Barcelona.

DCTs are also made in Dalian China, where a second DCT plant is being built. Just as the company has expanded vehicle production in China in recent years, Volkswagen has also expanded DCT production in China and also added a new automatic transmissions plant in Tianjin. This factory opened in the summer of 2016, and will make around a quarter of a million units, which could be doubled in due course. This will focus on supplying Audi and is in fact Audi’s first own transmissions plant in the country. It will concentrate on the production of manual transmissions for the vehicles made on the MLB platform such as the Audi A4. Porsche has always outsourced its transmissions from Aisin, Getrag and ZF.

Tier one landscapeHaving reviewed the situation at the major car companies, we now provide an overview of the positions of the major tier 1 suppliers of transmissions. The four main external suppliers, in order of size (measured by units made) are Aisin, Magna-Getrag (including Ford production), JATCO and ZF. These four suppliers have been the largest suppliers for some time, with the only major change in the structure of the supply side being the acquisition of Getrag by Magna. This was announced in 2015 and completed at the beginning of 2016. This was Magna’s largest ever purchase, with Getrag costing US$2.7bn; although Magna had some powertrain capability it never had full transmissions capability until the Getrag acquisition. 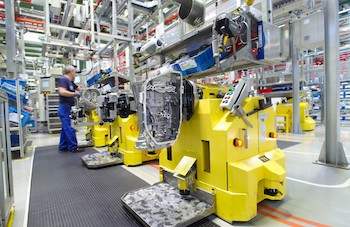 In the absence of significant other suppliers who could be acquired, growth by these major companies will have to be mainly organic with the establishment of new plants: in recent years for example JATCO has expanded outside Japan with three new plants in China, India and Mexico, the latter involving an investment of US$220m.