Variations on a colour theme

PSA’s Pierre Budar explains how production of the new Citroën DS3 hatchback has been organised to allow for the car’s twotone paint finish.

The DS3 is the first model in Citroën’s new line which will ultimately feature three distinctively styled cars; DS3, DS4 and DS5. Key to their appeal is detailing; the ‘shark fin’ B-pillar design, the ‘floating’ roof, and the extensive choice of customisable design options. 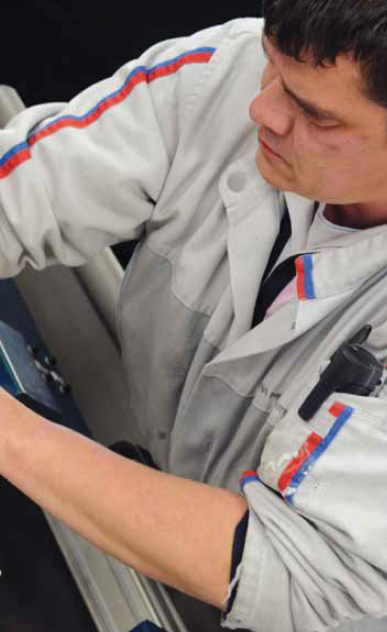 When Citroen launched the DS3 earlier this year, the model presented a series of new production challenges to Pierre Budar, Citroen Project Manager at PSA’s flexible manufacturing plant in Poissy, France. Not least of these was achieving the required paint finish on the car, a problem that would push the resourcefulness of the plant’s paintshop technicians to the limit.

The Citroen DS3 and C3 (on which the new model is based) are manufactured on the same assembly line at Poissy. “The models are produced using the same paint line,” says Pierre Budar. “But we have developed a special track that allows cars that are specified to have two-tone colour schemes to go twice into a paint cabin. We’ve revised the painting area quite recently with up-to-date equipment that uses environmentally-friendly, water-based paints. “At a specific point on the line, the two-tone cars go on to the special track. We then use paper to mask and protect the other finished areas of the body while we apply the second colour to the roof. There is no particularly special equipment – it’s not high-technology – the key is the specific track. Previously, it was not possible to have two different routes. We have had to build a special area for that. “We also use a different kind of paint for the second colour on the roof. We use paint that requires no additional lacquer because the lacquer is included in the paint formula. Normally, the colour and lacquer would be applied in two separate operations. We offer roof colours to match the available colours of the products that need no additional lacquer. So, while it is not accurate to say we have devised new equipment types, what is new is the way we have organised that area of the production process.”

In the case of the DS3, the customer specifies the desired colour combination when the car is ordered, with the information delivered to the factory direct from the dealer. “There are thirty-eight different colour ‘possibilities’,” explains Budar.

When PSA switched to using water-based paint at Poissy, it required a ceiling-mounted robotic solution that could carry a 17kg sensor. According to the carmaker, the only robot supplier with such equipment was ABB. In addition to fulfilling the outlined criteria, the company’s IRB 5500 robots were the only model with the flexibility to carry out 18 separate spot measurement checks around the vehicle.

Previously, the standard paint process had involved application of an electrophoresis coating, sealing mastic and a red-coloured primer, which also served to protect the electrophoresis coating from UV damage. Top layers consisted of two colour coats and one varnish application, with the car body baked between each application. With the introduction of the new system, the protective primer was removed from the process, replaced by a hardener in the two-coat colour application stage – the finished body fl ashed-off for a slightly longer period.

The new colour paint stage had to offer the same guarantees of paint quality as the previous system. This meant that the paint layer (with hardener) had to be thick enough to ensure the electrophoresis coat was protected from UV-related damage; a paint depth of less than 22 microns and the coating would likely flake and peel.

PSA added a further ABB 5500 robot to each of the three paint lines to measure paint thickness directly following fl ash off. Fitted with Phototherm laser sensors, these installations check 18 separate points on the car body. In the event that the paint thickness is found to be thinner than required, the problem area is sanded back and the body is reloaded into the system for repainting.

“The system we have devised references the two-tone colour combinations as a single code number. This means there is just one code which specifies both the body and roof colours. The colour combination is transferred from the dealer to the factory as a single number – the same as with a standard single-tone finish. There is no time delay, the overall paint process takes the same time as a single colour. The two-tone paint takes anything between one and two hours, which doesn’t affect delivery lead-times. The personalisation of the paint finish for the DS3 is unique in PSA, although the other aspects of the production process are common to other company plants.”

Budar goes on to explain that while the process of finishing an individual car does not affect lead times, the number of received orders can affect anticipated delivery dates. “If we have more orders than the maximum daily rate that production can support, you will inevitably have a proportionately longer leadtime. But this is normal for any car.”

Were there other changes required for production of the DS3 due to the two-tone paint option? “This is the first time we have been able to produce cars with two tone colours – we can produce 32 cars per hour. What is different is the facility for personalisation of a car, roof stickers, for example. We have developed special tools for the application of these products. The process is carried out at the plant but in a different workshop, after the car has left the main production line.”

According to Budar, the special tools designed to assist in applying the stickers allow workers to apply the product with very high accuracy. The stickers themselves are not your usual applique. “The stickers are made to a very high quality level. They will not peel, weather or deteriorate. We have very strict quality-control checkpoints in the workshop to ensure everything has been done correctly. Everything is completed to the same level of quality found across the full production line.”

Limitless possibilities
“It is theoretically possible that during the production life of the DS3, the same car will not be produced twice, ” says Budar. However, he believes that there is a long way to go for the DS3 in terms of production. “So far, customer response has been very good. Customer utilisation of the ‘personalisation’ facility has been extensive, although in France I understand that among all the orders taken, there have already been two cars requiring exactly the same specification.”

How many possible permutations are there? “To be honest, I don’t know exactly, but the number must be huge. It’s not a problem for us.

Although there are so many different colours and items that a customer can specify, it’s just a matter of using the coding systems.”

Built in 1938, PSA’s Poissy plant was originally a Talbot factory. It currently produces the Peugeot 207 hatchback and SW, and the Citroën C3 and DS3. Production in 2009 was 175,600 units. The facility includes a stamping line providing parts for a wide range of group vehicles, and has a workforce of 6,000.

Will such a system be employed in other plants and on future cars in the PSA Peugeot Citroen range? “We are already used to producing different models on the same line. The only constraint is that not all the cars on the line will have the same lead time - that depends on whether a car has a high or low level of specification. Although we can absorb some differences in lead times, the speed of the line must remain constant.

“For example, the lead time for a model with a diesel engine is longer than that of one with a petrol engine. So if the model mix of cars in production includes a large number of diesel versions with a high specification level, the lead time will be longer. An opening roof will require additional work and result in a longer lead time. Though, if one customer ordered a C3 today and another ordered a DS3, both with similar engines and specification levels, the delivery lead time to those customers would be the same – or at least very close.”