Delmia has implemented software solutions to upgrade the paint lines at Caterpillar’s facility in Decatur, Illinois, where a number of new robots have been installed requiring intensive re-programming

When Caterpillar wanted to upgrade its robotic paint line it was agreed that utilising the Delmia IGRIP software with the UltraPaint add-on was the optimal solution. IGRIP is a physicsbased, scalable robotic simulation solution for quick and graphical modelling and off-line programming (OLP) of complex, multi-device robotic workcells for applications such as painting, welding, dispensing, material removal, and machine tending. The OLP capability allows users to accurately program robotic systems without tying up physical resources on the factory floor thereby reducing man-hours and process engineering lead-time while improving accuracy.

Included with the UltraPaint is a complete set of painting simulation tools. Spray gun and paint attributes can be entered into the painting device and the results can be graphically displayed in multiple colours illustrating relative film thickness; or exact thickness can be obtained though the uses of a built-in film build gauge. Complex paint booths can be constructed, and multiple robot moving line applications can be simulated. 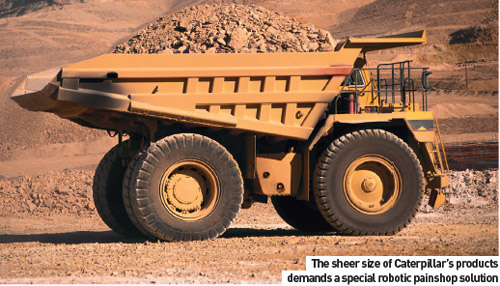 In this application, each existing part paint program was simulated in the cell, taking into the consideration the new robots in order to check for reach ability and clearances. With the simulation capability, existing programs could be optimised to gain efficiencies. For example, any unnecessary helicopter moves, where the wrist wraps around in a 360° move and is typically a waste of motion and time, could be identified and eliminated.

IGRIP is part of the Delmia Resource Modeling and Simulation solution suite, providing the tools to develop and implement resources, application routines and mechanical programming. Within this set of solutions, resources such as robots, tooling, fixtures, machinery, automation and ergonomics are defined and infused into a complete manufacturing scenario.

More information about Caterpillar is available at www.cat.com