Summer of success at VW Sachsen

When the carmaker needed complete reconstruction of two topcoat lines in the factory’s standard vacation period, it turned to Durr for paintshop building

Mission accomplished! With these two words, project manager Ralf Gildhorn announced on 12 August 2008 the successful end of the greatest summer reconstruction including robots in a paint shop that Dürr has ever carried out.

Volkswagen placed an order with Dürr Systems GmbH in Bietigheim-Bissingen in December 2007 for the reconstruction and full automation of the two 112 m long topcoat lines for the Golf 6 and Passat models. For interior and exterior painting, painting machines and manual workstations were replaced by robots. The use of these robots will lead to a capacity increase, to an improvement of surface quality, and to considerable paint savings.

The execution period for the work was the four-week factory vacation in summer 2008. The range of delivery and services included the removal of the old installation for scrapping, the paint supply, conveyor technology, spray booth, steel construction and the installation of 87 painting and handling robots for the ten base coat and clear coat stations.

Good planning and high quality equipment together with professional project management proved to be the success factors for the fulfilment of such a momentous task.

In all phases of the project, Dürr employees worked to the guidelines of the project management manual of the Dürr Group. Examples of this were process safeguarding in the Dürr technical center, running assembly workshops, holding regular project meetings with the customer and carrying out risk assessments during the entire engineering and installation phase.

Preparatory works began as early as February 2008, involving the maintenance groups of paint supply, steel construction and for the pre-commissioning of one of the two topcoat lines in Zwickau while production was still running. In parallel to this, design, procurement and manufacturing were handled at Dürr in Bietigheim- Bissingen. Starting in May, pre-commissioning, an important project phase that safeguards that all installation components cooperate smoothly, could be carried out on both lines. This way, unpleasant surprises during the later commissioning in the paint shop are avoided. The precommissioning of topcoat line 1 with conveyor technology and process control was carried out in Zwickau and that of topcoat line 2 in Bietigheim-Bissingen with a carefully scheduled movement program.

38 semi trailers were necessary just to transport the 87 robots and 61 control cabinets to Zwickau. In total, more than 400 tonnes of equipment and material were supplied for installation. 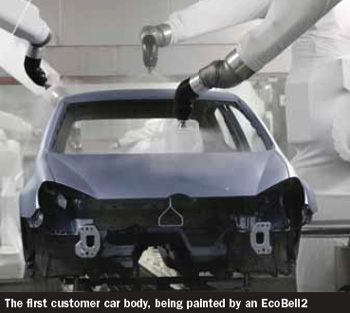 The hot phase of the reconstruction began on 11 July with the demolition of the old installation. 300 tonnes of scrap in 72 containers were disposed by 14 July, using130-150 staff in two shifts.

280 tonnes of steel construction, 126 metres of roller conveyors and 52 metres of chain trough conveyors formed the basis for the installation of the 51 painting robots and 36 handling robots in the ten painting stations. The works were carried out by four teams in a two-shift operation, in a day shift of 170 workers and a night shift of 160 workers.

The assembly phase ended after the 360 metres of booth wall for the painting booths were set up and more than 70 km of cables were laid out.

Then the conveyor technology, the fire protection system, dryer, paint supply and robots were commissioned. The first paint flowed from the atomizers on 1 August, the first body was coated at the beginning of August. At the planned start of production, 686 bodies were produced in topcoat line 1. In topcoat line 2, the first customer car body was painted three days earlier than planned.