A subcontractor is using a CO2 snow-jet cleaning system integrated into the manufacturing process, instead of a powerwash system to clean plastic parts for the motor vehicle industry. This reduces both operating costs and rejects caused by defects

The core competence of Techno Color is the painting and coating of plastic parts. The sub-contractor, based in Germany, concentrates mainly on components used in the interior of cars. The plant uses several painting lines, which means that it can apply soft, decorative, metallic, metal-effect and clear varnishes, through 2K varnishes to UV-hardening painting systems; it also has a PVD coating plant. The company paints and varnishes parts for almost every European vehicle manufacturer. 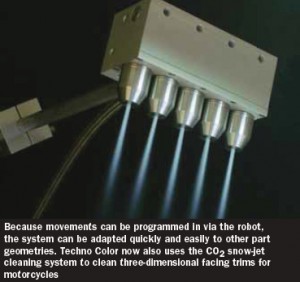 Techno Color was searching for an efficient alternative to the existing powerwash system for the cleaning of a manufacturer emblem for airbags before painting. “These sensitive decorative components are given a three-layer treatment consisting of a primer, PVD coating and clear varnish. They are cleaned once as an unfinished part and then before the clear varnish is applied,” says Gerd Burger, the project manager responsible for setting up new processes at Techno Color.

Cleaning was initially carried out in the existing powerwash system. Because the emblems are mainly soiled with dust and transport residues, this type of cleaning was labour-intensive and time-consuming, since the residual water had to be dried off. “We moved the process to a painting line without wet chemical pre-treatment and worked for about six months with a borrowed system of cleaning using ice pellets. After reading an article about APC’s CO2 snow-jet cleaning system, he contacted the technology company to learn more. “Initially, the snow-jet system seemed more efficient and easier to handle,” says Burger.

System had to be reliable, above all
Techno Color’s main requirements were that the soiling should be removed in a dry process with reproducible results and a high level of process reliability and that the layer of chrome applied in the PVD process before the second cleaning stage should not be damaged. A high degree of system reliability, compact design and simple integration into the existing painting process were other requirements.

Also, there had to be absolutely no possibility of cross contamination – that is, no danger that dirt which had been blown about could settle on a component that had already been cleaned. Burger and his team investigated the general suitability of the process in cleaning tests carried out in the system manufacturer's technical unit. The cleaning results were assessed in tests using comparative measurements with PartSens. The measuring system developed by ACP for the detection and quantification of particle pollutants works using glancing light technology.

Fast and flexible
This painting robot boasts the largest working envelope and highest flexibility compared to other robots in its class. Thanks to this large working envelope, together with fast acceleration and painting speed, two IRB 5500s equipped with high-speed rotation atomizers RB1000 can perform the same work that require up to four robots when using today's conventional standard solutions. ABB has already implemented this concept at a well-known German carmaker's plant. To sum up, the IRC5P controller makes painting easier, faster, more efficient, more cost effective and its improved availability is impressive.

The next phase was the integration of a system directly into the painting booths in August 2007. For this, ACP fitted an existing painting robot with a nozzle array with five cleaning heads and assisted Techno Color in programming the robot movements needed to clean the parts. “Integrating the system into the painting process was completely problem-free. To operate the cleaning system, we only needed to put down lines for the liquid carbon dioxide and the compressed air,” says Burger. A tray of 90 ornamental parts can be cleaned in just 40 seconds.

Because movements can be programmed in via the robot, the system can be adapted quickly and easily to other part geometries. Techno Color now also uses the CO2 snow-jet cleaning system, for example, to clean three-dimensional facing trims for motorcycles. The compact design of the nozzle array means that even parts that are hard to reach can be cleaned. 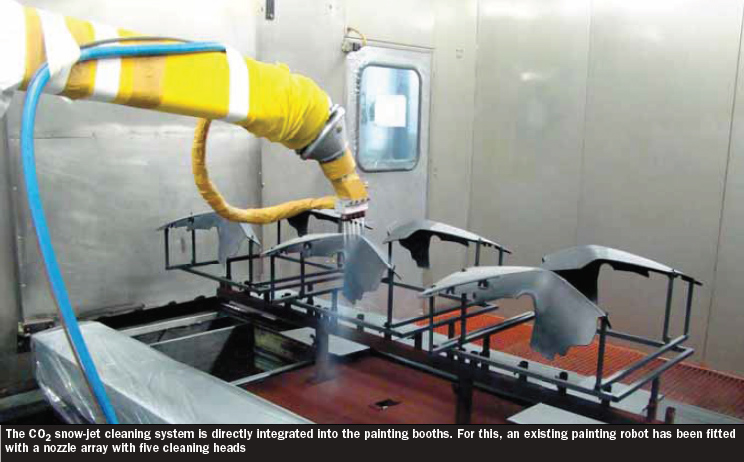 Optimum results with the patented cleaning head
In contrast to CO2 pellet cleaning, the snow-jet cleaning system developed by ACP uses liquid carbon dioxide as the abrasive. “The liquid carbon dioxide is much easier to handle and transport than ice pellets, and keeping it in stock is far less complicated. We are still working with bundles of cylinders, but we will be changing over shortly to a CO2 tank which will be filled once a month. The cleaning head in the Snow-jet system is also ideal for our application, since it guarantees optimum cleaning results.” Burger explains.

Apart from its compact dimensions, the characteristic that distinguishes the patented cleaning head is its design as an ultrasonic two-component concentric nozzle. As it emerges from the nozzle, the liquid carbon dioxide expands into a ‘snow’/gas mixture that forms the core jet. Compressed air is added as a coating jet, which accelerates the CO2 snow crystals to ultrasonic speed. Acceleration using compressed air gives a much better cleaning performance than that achieved using single-component nozzle systems, with a low level of carbon dioxide consumption.

The non-toxic, non-combustible CO2 snow removes solid and film dirt in a dry process without residues, using a combination of mechanical, chemical and thermal cleaning methods. When they hit the surface to be cleaned, the ‘snow’ crystals turn into a liquid and sublimate after impact. The sublimation impulse created loosens and removes the finest particle soiling. In the liquid phase, the environmentally neutral carbon dioxide acts as a solvent and removes film layers or soiling. The tiny crystals are not hard, which guarantees that the surface of the PVD layer is not damaged and the quality of the decorative parts is maintained.

Because of the three-layer concept, various handling processes are required for the decorative parts between the various process stages, and there is always a risk of new dirt building up, which means that defective parts have to be excluded. Since Techno Color started working with CO2 snow-jet cleaning, exclusion as a result of defects has been cut by at least half. The comparatively low operating costs for the process are a further advantage for the subcontractor. “Compared with icepellet cleaning, CO2 snow-jet cleaning is about 50 per cent cheaper, and there are tangible commercial advantages over a powerwash system too. The advantages are that you need less space and secondly, neither water nor chemicals are needed. Also, no waste water or waste materials have to be treated or disposed of,” explains Burger. Techno Color has invested in a second CO2 snow-jet system, to be used in another painting line immediately before the painting booth.