A revolutionary paint protection system may have come at just the right time for OEMs, as WGI’s Ronald Green explains

Walker Group Incorporated (WGI) is a Canadian company founded 1968 with a production facility located in Toronto and offices in Vancouver and California. The company has been a Toyota Canada Inc. supplier since 1995 and has won TCI Platinum Preferred Supplier Status.

Its Weather Resistant Automotive Protective Spray (WRAPS) is a water-based, ultra low VOC clear protection liquid spray and is applied to a painted body after paintshop oven curing and prior to assembly. It dries clear to a thickness of 8mm and requires no chemical assist (solvents/ alkalis) for removal at the retail dealer. It is intended to take the place of the tape that is used by OEMs at the end of the assembly line now. The drawbacks of the tape system are many; it is used after assembly; the painted body is vulnerable through trim and final; it is labour-intensive, expensive, it has a finite protective lifespan and takes up a huge amount of space in a landfill site.

Early in the 2000s, a Chinese automotive group, Shanghai Automotive Industries Corporation contacted Walker Group and asked them to come to China and help with a problem; the carmaker had many vehicles that had been stored for a long time and had badly damaged paint finishes from environmental fallout.

A ‘seed’ came from this observation and WGI were encouraged to try and prevent this kind of damage happening in transit and storage.

Over the last five years, WGI has been working with literally hundreds of different formulations to finally develop the unique product it now offers.

The product has worked out to be most suitable for post paintshop and not end-of-line application, as Ronald Green says: “We found we could not spray on material at the end of the line primarily because WRAPS is a true water-based formulation and proper cure time could not be achieved at the end of production. Also the liquid material was not totally compatible with some body mouldings and some other nonpaint parts of the vehicle. So, in re-thinking the process and talking to several carmakers, we found that the real interest was in moving the process back to the end of the paint line.”

Of course this means applying the material to the body before assembly began and this gives protection against ‘casual’ abrasion, from parts touching the vehicle, operators brushing past the painted body etc. The most intriguing part of the results of WGI’s survey of OEMs was that many of them are putting still some heavy duty ‘pads’ on to fenders, doors, hoods and trunk lids to protect vehicles as they are assembled. The problem with these pads is that they are expensive, labour must be used to return them to the start of the assembly line after use and they get contaminated and so have a finite lifecycle.

The solution – ‘cover in a can’ 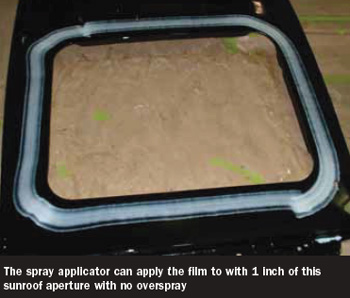 Ronald Green is evangelistic about the system: “The beauty of the WRAPS system is that it is applied by robots, there is little or no overspray and once cured it is three times the thickness of the commonly used tape systems. It can stay on the vehicle for a year or more; we have tested it for longer than a year with excellent results. As most people in the industry know, if tape is used, it must be removed within 90 days although some tape makers have tried to extend this period to six months.”

Coverage with the WRAPS system is possible on approximately 80% of the painted surfaces of the vehicle, this 80% does not, of course include hidden areas such as light fitting ‘wells’ where protection is not required anyway.

Areas that will be covered by fitting such as light and handles would not be covered as the material would affect the tightness of fixtures and would remain under fittings after the bulk of it has been removed.

Applying the film – how much for the paintshop? 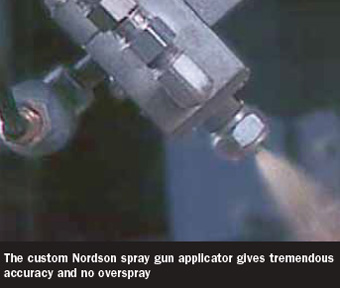 WGI has worked out some numbers for the robot station or booth that will need to be installed at the end of the paint line; while these figures are not exact, two robots (its robot partner is Fanuc at present) would be required at a cost of around $500,000, including control systems (it is working with Artomation on controls) and software. WGI have been working with Nordson who have developed a highly effective gun nozzle that avoids overspray and gives a very accurate deposition fan.

The paintshop would also need to provide a paint booth-like area for the process but it would not require sophisticated air management or filtration system as the material is fairly benign in its chemical composition. An infrared heating system (presently from IRT Systems) would take up some space but the bodies do not stay under this heat for long as they are still warm from the paint curing ovens. WGI have worked out that including savings in labour, wrapping tape cost and lower rework rates through better damage protection on the line, the WRAPS system will be more economical and can provide a significant increase in surface area protection over tape.

The material is applied to a thickness of 14-15 mm, and cures to leave a layer 8-10 mm thick. A typical tape is approximately 3mm.

When applied and during the curing process, the material appears opaque white but it dries to an almost completely transparent state – one cannot clearly see the material in place from a distance. It is a water-based polymer, with ultra-low VOCs and it will allow gases to permeate through it. This means that the underlying paint can continue to dry and cure after it has been coated without negatively affecting either the painted surface or the WRAPS coating.

The film undergoes an infrared heat curing cycle that speeds the process; it will cure itself in four hours at room temperature.

On the other hand, it will not allow water, solvents, petrol (gasoline) and other liquids, bird droppings and rail dust to penetrate it, thus protecting the paint. It also protects against UV light damage.

Green is enthusiastic about OEM take-up of the system but is hampered by the extreme secrecy of the company’s existing and prospective clients: “We have done extensive lab tests, both in-house and independently, with major OEMs, one particularly extensively but as they are still testing we cannot divulge their identity. This carmaker has been doing preliminary field tests on completed vehicles in various climate conditions. The next step is field testing at OEMs, using robotic application instead of manual spraying.”

Cleaning off the film requires a water hose or pressure washer to wet the whole covering; this turns the film opaque and makes it easier for the operator to see. Then it is simply lifted off, starting at a convenient edge or corner.

One might think that if it is so easy to remove by hand that it might lift during high-speed transportation, should air pressure ‘get under’ an edge or seam. WGI has tested treated car bodies in a 100 mph (160 kph) slipstream and no lifting was found to happen.

Another feature of the material is that as it is water-based, it is a lot greener than a polyethylene tape product and it will break down in a similar fashion to the biodegradable ‘plastic’ bags used by some food packers for fruit and vegetables.

WGI is developing instruction sheets for dealers to help them recycle the film once it is removed.

Dealer reaction has been very positive, they recognise that they no longer will need to buy a solvent to help remove protective tape and once removed the WRAPS film leaves behind only a mild soapy residue that is removed in the standard valeting wash process, before the car is displayed or handed over to the customer.

The time is right to wrap

As demand for new vehicles has dropped, so protection for stock cars that can sit in storage (or in the open air) for more than a year is more vital than ever. Some OEMs have had to employ third party labour (through their logistics providers or other contractors) to remove the original transit protection tape and apply fresh, to protect against UV and other environmental damage.

As with many great ideas, competition is never far away; there is a competitor liquid covering process being used by a Japanese OEM says Green: “It is solvent based and applied at the end of the line but it has a finite lifespan: it must be removed within 90 days or it will not come off easily.

When buffer stock times of Japanese cars were running at 15-20 days this process made sense but at present, stock or order to delivery times are often over 100 days so with this re-taping scenario, it can cost the OEM a lot to keep the cars smart and saleable.”