Plasma for the perfect finish

If a brand is to score it needs to look good and this means that pre-treatment prior to the final surface coating is essential. One way to achieve this is through the high activation of surfaces using atmospheric pressure plasma. The process, using an in-line jet system, is known as Openair plasma.

Atmospheric pressure plasma technology is gaining in importance in automotive engineering and proving itself suitable for rendering surfaces micro clean for ultimate finishing results, as well as for creating perfect adhesion. Plasma is the name given to matter at a high, unstable energy level. Energy is input via the solid, liquid and gaseous states of matter. Plasma technology does not stop at the gaseous state of matter: if by means of electric discharge additional energy can be fed into the material, the electrons gain more kinetic energy and leave their atomic shells. Free electrons, ions and molecular fragments are produced. This state, however, can scarcely be used at normal pressure because of its instability. This is where the atmospheric pressure Openair plasma process patented by German company Plasmatreat comes in. Applying plasma jets this state of matter, scarcely used hitherto in industry, the company successfully harnessed the state – a first in industrial production processes. 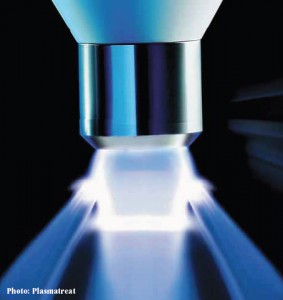 Activating and cleaning surfaces
A special feature of Openair Plasma is that the emerging beam is electrically neutral. This greatly extends and simplifies its range of applications. Its intensity is so high that machining speeds of several hundreds of metres per minute (m/min) can be achieved. The plasma beam is formed and focused at the jet outlet and gives up its energy on contact with a surface. The most important components of the plasma installation are the plasma jets and generators. Inside the plasma jet the atmospheric-pressure plasma is generated by high-voltage discharge. A directed stream of air along the discharge pathway isolates parts of the plasma and transports them through the jet head to the surface of the material to be treated. The jet holds back those parts of the plasma stream carrying charge. In addition it determines the geometry of the emergent beam.

Bonding to polymer
The surfaces of plastics are often chemically inert since their long polymer chains have low surface tension and possess no or only few functional groups. As a result they are very difficult to bond adhesively, paint or coat. The ions and free electrons in the plasma beam cause the attachment of nitrogen and oxygen to the surface of the polymer.

Functional groups such as –OH and –NH are formed. “In this way the plasma activates the surface by selective oxidation processes, discharges them and brings about microfine cleaning. Heating up of the plastic surfaces during treatment in this case is typically T < 20 °C. On the whole, activation of the surface takes place and this has a very positive effect on adhesion,” declares Plasmatreat CEO Christian Buske. The process can be employed on the surfaces of metals, plastics, ceramics and glass.

The plasma technique is characterised by a threefold action: it activates a surface by selective oxidation processes, eliminates static charge and brings about microfine cleaning. If a special precursor material is added, selective nanocoating of surfaces can be accomplished. The system is capable without restriction of implementation in-line and is compatible with robots, offering extraordinary cost-effective solutions. Modern products require high-grade coatings. Nothing is more annoying for a customer than flaking paintwork, which in many high tech products may even be associated with faulty operation. The automotive industry demands a great deal of painting and coating: switches with laser-etched symbols, highgloss trim strips and covers, scratch resistant display windows and sparkling dials, ventilator grilles or glove compartments handles. Even plastic parts in car interiors are now provided with very expensive coats of paint. Plasma technology can be employed here as a pre-treatment process both for adhesive bonding and for painting.

Removal of coating from headlights

The reflectors in the headlights of commercial vehicles are provided with a thin layer of aluminium by vapour-deposition in vacuo. The headlight lens is then bonded into place. In this operation, however, the aluminium layer is not wanted in the bonding region because it can give rise to problems of adhesion and corrosive infiltration. Plasmatreat has developed a jet technique by means of which selective removal of the coating from the surface is enabled.

For this purpose a high-energy plasma is applied to the areas to be delayered and the layer of metal is very effectively removed. The improvement in quality achievable by this plasma application is frequently accompanied by a reduction of over 10 per cent in wastage rates.

Vehicle parts
Demand for specific vehicles in addition to requirements for multiple paint layers causes bottlenecks in the curing ovens. A vehicle part typically has many passes through the painting process. A typical plastic vehicle part will have a primeradhesion promoter, one to eight or more layers of basecoat and finally a clear coat. Ovens have limited capacity. Most manufacturers only have one paint line and curing oven in a facility. Therefore, one part will travel though the same oven four to nine or more times. Anyway a manufacturer can increase capacity without adding significant capital expenditure, such as additional oven capacity, allows significant cost savings. One fewer pass through the painting process reduces the cost of primer, associated labour and the burden of fixed costs for the oven.

In the case of particular vehicles, it is not feasible to have the same product appearance while reducing the number of decorative coatings used. However, by using the Openair Plasma process, the primer used for adhesion to the plastic part can be eliminated. This saves one trip though the oven for each part. The result is a decrease in oven passes by 25 per cent for most parts and a significant increase in capacity. Other pretreatment processes, including corona chambers and flaming, can cause thermal damage to the part and give rise to safety issues, problems that do not occur with atmospheric pressure plasma.

Switches with laser-etched symbols, high-gloss decorative strips and covers, scratch-resistant displays and glittering fascias, ventilator grilles or glove compartments – all show that even plastic parts in the interiors of automobiles are today provided with very expensive coats of paint. Here Openair technology can be used as a pre-treatment process both for bonding as well as for a first class surface finish, as is the case, for example, in vehicles made by BMW and Rolls Royce. 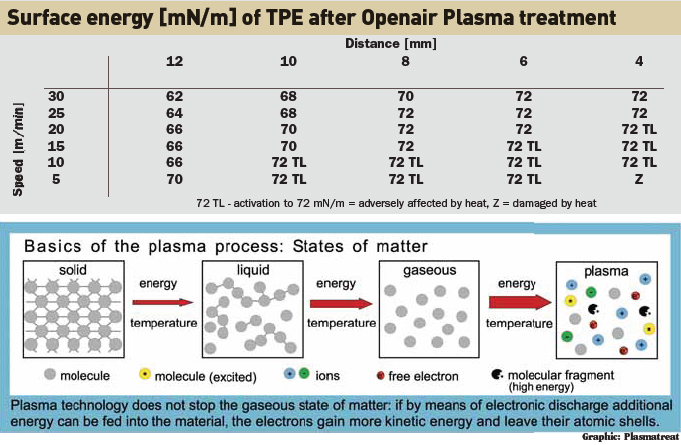 The bonding of door seals is also achievable . In various VW models extra sound insulation is provided by an additional door seal in the upper region of the front doors. This increases driver comfort by cutting out road noise. For the base material of the seal VW selected a thermoplastic elastomer (TPE) which, as a nonpolar material, exhibits very low surface energy.

For pre-treatment prior to applying the MS polymer adhesive a solvent-free system was used. After comparing different corona and plasma systems, special importance being attached to a wide process window, VW decided in favour of rotating Openair Plasma jets. The table clarifies the effects of Openair Plasma treatment. Since then nearly all of the door production lines at Volkswagen have been equipped with this system.

Corrosion protection
Decorative aluminium trim strips on vehicles have grown in importance in recent years. As an appealing design element they now adorn even cars in the lower mid-range. Here visual requirements are distinctly high. Special value is attached to an immaculate glossy finish. Naturally this gloss must withstand routine daily corrosive attacks (water, salt and temperatures) and be able to do this over many years. This degree of protection against corrosion is usually obtained by anodising and subsequently compacting the aluminium surface. However, extreme demands on corrosion protection are likely to arise from new planned washing processes operating with highly alkaline washing solutions (pH: 13.5). The trim strips are waxed immediately after production to prevent scratching and soiling of the surfaces, but before the car is dispatched from the works the hydrocarbon is removed again by manual polishing. This is a distinctly time-consuming and cost intensive operation. Nevertheless, an outstanding level of corrosion protection is needed to cope with this future washing process. Even after one or two minutes the surface protected only by anodisation will be so damaged that the gloss is lost.

To deal with this problem Plasmatreat has developed a nanocoating called PlasmaPlus, which protects the gloss during the typical single washing process. The coating, based on organosilicon compounds, is applied by robot. These examples make clear that there are scarcely any limits to the versatility of pre-treatment with this technology. The system is capable of in-line integration and suitable for robots, reliably meeting the criteria of car manufacturers. It also offers them simple integration into process flows and compatibility of the treated surfaces with cathodic electrodeposition painting. All of this is done, while compatibility with the environment is outstanding.