Mix and match and measure

The growing catalogue of effect paints now flooding the automotive market means matching and measuring colour is more of a challenge than ever. X-Rite has come up with a new tool which it says will make the job easier

X-Rite has launched its xDNA system with MA98 handheld spectrophotometer offering automakers and their suppliers considerable savings in time and money in applying metallic flake and other effect paints that are popular with the vehicle-buying public.

The xDNA package solves a daunting problem that has concerned automotive suppliers and the automakers since metallic flake, pearlescent and other effect paints were introduced in the 1970s: how to accurately measure the colour and appearance of coatings with “sparkle” that confounds optical instruments. X-Rite, the world’s largest designer and manufacturer of colour measurement instruments and software, says its xDNA system took three days to solve a problem involving an effect paint that troubled a major automaker for more than two months.

No more trial and error
According to X-Rite, manufacturers often waste a significant amount of time and money trying to match body panels, bumper fascias and other parts coated with effect paints. This is because they do not have instruments that measure why the paints look different under different illuminations and observation angles. Quality control personnel on a production line may observe when a body panel and bumper fascia doesn’t match properly, but prior instruments could not give consistent and accurate measurements why the mismatch is occurring. Consequently, companies can spend an inordinate amount of time and resources trying to determine the root cause of painting problems through trial and error methods. “With today’s introduction, X-Rite is giving automakers and their suppliers the appropriate tool to distinguish characteristics of effect paints that can’t even be detected – much less analysed – by other systems,” says Brian Teunis, Market Manager of X-Rite’s Industrial Color & Appearance division in Grand Rapids, Michigan. “We coined the term ‘xDNA’ to emphasise the fact that each effect paint has a unique, three-dimensional mathematical model, similar to the way that each person has a unique DNA structure. The exact name for X-Rite’s package is Dynamic Numerical Analysis, but we figured xDNA was a little easier to say.”

Problem solving
The xDNA system promises to speed introduction of new effect paints by designers and paint manufacturers, improve the first-time quality of products being coated with the paints, and reduce the time and effort of troubleshooting manufacturing problems that occur on the factory floor.

For instance, one of the world’s largest automakers was able to resolve a problem matching the effect paints of bumper fascia and body panels in three days using the xDNA package – after spending more than two months trying to resolve the issue through the use of other measurement systems. 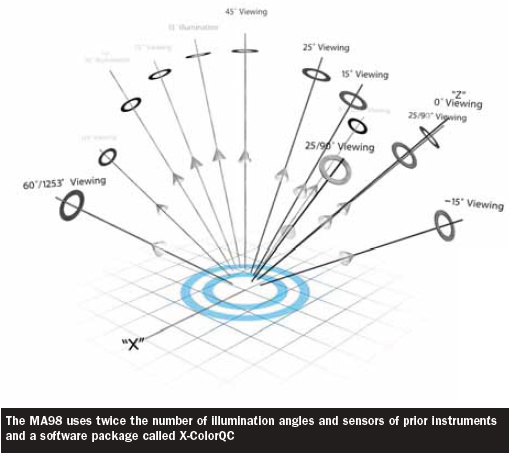 The keys to xDNA are a new instrument called the MA98 that uses twice the number of illumination angles and sensors of prior instruments and a software package called X-ColorQC. The software manipulates the data with proprietary xDNA algorithms to generate easy-to-understand graphs that show unique characteristics of an effect paint. X-Rite has run exhaustive tests to prove how its new xDNA package can give manufacturers reliable and consistent data that can help:

• Predict whether a person will be able to perceive a difference in colour and appearance when the formula of an effect paint or the process used to apply the paint are changed.

Teunis said X-Rite will first market the MA98 and xDNA system to the automakers and automotive suppliers in the US and Europe and both will be available in most languages.

From a hardware viewpoint, the MA98 is a precision 31-point spectrophotometer designed for ease of use on the factory fl oor. Weighing about 1kg and covered with a soft over-mould case for two-handed use, the instrument is designed for comfortable measurement by shop fl oor personnel. Other features include:

• Quick measurement time of about one second, with calculation and display in a total of two seconds

• Battery powered to last up to 16 hours or take about 1,000 5-angle measurements per full charge. The instrument can also operate from an AC adapter

• Compatibility with previous generations of X-Rite instruments, allowing continued use of existing databases

• Software that can instruct the operator on the proper techniques of measurement, with both text and visual cues and

• Improved optics and lens system to deliver double the light of previous systems to the surface being measured.