Keeping down the costs 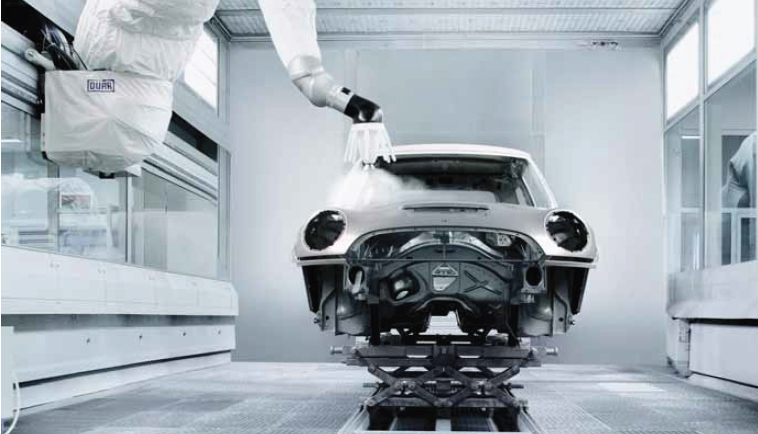 When 90 per cent of your business is accounted for by one industry you have to be certain that it is an industry with a future, particularly in a specialist area such as the paint shop, where the level of investment is enormous. This might explain why the number of companies involved in this area can be counted on the fingers of one hand. Two of those companies can be found in Stuttgart, Germany. Ever since Paul Albert Dürr founded his eponymous business in Cannstatt, a suburb of Stuttgart, in 1895, it has been closely involved with the motor industry. Initially Dürr was a sheet metal supplier, but it then branched out into paint and assembly systems to meet the opportunities its founder saw opening up before him as the automotive industry blossomed. A century of growth has seen this family business grow into one of the global powerhouses in paint technology, employing almost 6,000 people.

However, it has not enjoyed a seamless run of success and, like other businesses, has had its ups and downs, usually in parallel with the industry it serves. The ongoing challenge of the 21st century, which is taxing virtually every responsible business on the planet, is that of ecology and using processes that are as green and environmentally friendly as possible. 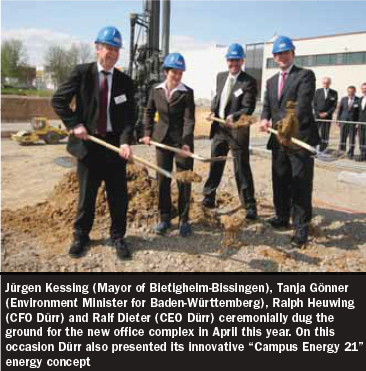 New campus
Dürr has recently announced “Campus Energy 21” – an expansion of its premises at Bietigheim-Bissingen that will now include a campus where all its paint, final assembly and environmental technology activities will be centred. The sustainable foundation of the campus has already received critical acclaim from the German government: Environmental Affairs Minister Tanja Gönner said that the innovative concept was an exemplary model for forward-looking supply systems. “Beacon projects like the Dürr campus help pave the way for modern environmental technologies to enter everyday practice,” she said at a presentation of the concept at the end of April.

Once up and running (in mid-2009) this 70,700 square metre site will be the home of around 1,500 Dürr employees who will benefit from the energy-efficient design of the new building. In the process, the company will become the largest employer in the town. The campus will be home to the mechanical and plant engineering group, a logistics centre, and a 2,500 square metre extension of its testing facilities where Dürr develops paint systems’ products and processes, and where customer trials can be carried out.

“Two elements contribute to that. Firstly, there is the energy-saving design of the new building complex, which is characterised by very good heat insulation and smart building technology. Dürr beats the values prescribed by the German government’s Energy Conservation Ordinance by 60 per cent. Secondly, a combination of five energy sources makes the key contribution to conserving resources.” 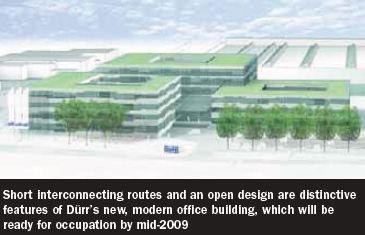 gas. The heat generated is used directly in winter and in summer converted into cold with the aid of absorption equipment. A third energy resource comes from geothermal power. Dürr derives this from earth probes that reach to a depth of 99 metres to absorb the heat from the ground in winter and give it off in the summer. The energy is transmitted with water which serves the purpose of cooling or – after further warming – that of heating. Using ground water that is captured by production wells and returned into the earth with injection wells also operates according to this principle.

In addition the campus gets energy from an earth heat exchanger, in which air flows through a 240-metre length pipe and is tempered with the help of earth heat and cold for building ventilation. Finally the plant uses process heat recovery systems in which exhaust air from the technology centre is fed into heat exchangers. The clean electricity produced by these means can also be fed into the public power grid.

Dürr has embarked on what it terms its ‘Dürr 2010’ strategy, by which it hopes to improve its margins. “We want to grow sales revenues at an average rate of 5 per cent a year through 2010, and therefore more strongly than automobile production,” says Ralf Dieter.

Another aspect of Dürr 2010 is increased funding to expand the painting robot business in Asia and North America, and debt reduction.

Cost control
Germany’s Eisenmann, one of Dürr’s key rivals, is also re-evaluating its business practices and reacting to the environmental demands.

“In the last few months we have seen an absolutely explosive rise in costs which is hurting pretty well everyone, and when you consider that up to 40 per cent of a car plant’s energy consumption is due to the paintshop, then you realise why the car companies are so concerned about keeping costs under control,” says Bruno Casorati, Eisenmann’s Senior Vice President of Sales. “At the same time, though, they are also very aware of their environmental responsibilities and need sustainable and efficient energy solutions wherever possible. This means that we are looking at environmentally beneficial plant technology to save resources in the form of chemicals, coating materials and water.” 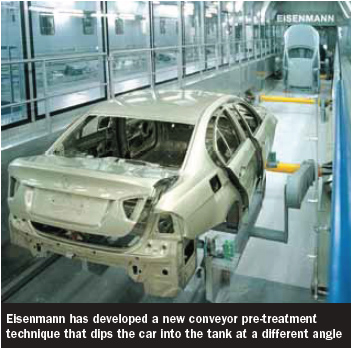 This has led the company to develop new processes that set out to minimise the primary energy consumption. “We have developed a pre-treatment, new conveyor technique in which the car is dipped into the tank at a different angle. This has led to a reduction in both the volume of the tanks and the number of agitation pumps needed. Combined they have had a direct impact on the amount of energy required to keep the operations going.”

Cool ideas
Another area that Eisenmann is looking at is oven-heating technology. “We are investigating different types of processes to reduce the size of the incinerators, heat generators and burners,” says Casorati.

Further energy can be saved by utilising air-circulation systems with a high recirculation rate of over 90 per cent. This leads to a correspondingly low fresh air/exhaust air ratio for the large spray booths, which are usually air conditioned and equipped with highly efficient cross-flow venture scrubbers. “This ensures that only a small exhaust air stream need be disposed of, preferably by regenerative thermal oxidation, although recuperative thermal incineration is also possible,” says Casorati. “Above all, though, this concept achieves considerable energy savings, especially as the air is cooled and treated by Eisenmann in a closed cycle via heat pumps. The resultant advantages are so significant that this solution is not only suitable for new plants with lower investment costs but also for converting fresh air/exhaust air spray booths.” Scrubber technology is also coming under the microscope says Casorati, with the need to replace water with another system, perhaps using electrostatic techniques to capture the overspray. Such an innovative system would contribute to decrease energy consumption for spray booths enormously by eliminating the entire pumping system that floods the scrubber section. Eisenmann is currently working on such an innovation and expect to present results in the next few months. 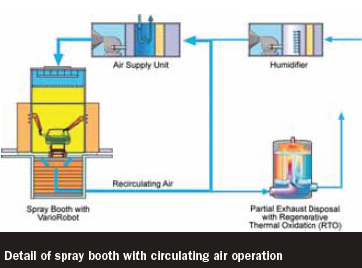 energy conservation equation. “Both the VarioBell that applies wet paint and the VarioPowderBell that applies powder coatings are very efficient high-rotary atomisers,” he says. “With their vertical axis being integrated into the booth wall, the Vario Robot allows a narrower booth construction with consequently lower air and energy requirement. That means that the width of the painting booth can be reduced from five to four metres leading to a base area of 32 square metres rather than 40 square metres. At the same time the air rate has been reduced from 58,000 m2/h to 46,000 m2/h leading to great cost savings.”

Chemicals and coatings
A key factor in energy saving processes is working with chemical companies. “This is a very important part of the equation in keeping costs under control whilst also ensuring that we can get the most energy efficient solution,” says Casorati. “The paintshop of the future must be a combination of efficiency and productivity while also being as low cost as possible. It’s a challenge, but working with our customers around the world, as well as with our own suppliers, it is achievable.”

“The market has now become very tough in terms of capital investment. We need to be as efficient as possible to keep energy costs as low as possible, while our customers are always looking for lower prices; it’s a balancing act, but one which we at Eisenmann know we can meet.”