Dr. Arabnia manages to combine the zeal of an ecowarrior with the sharp business sense of a man used to winning contracts from much larger competitors. On paint processes – water-borne and powder, he is enthusiastic about the benefits but he is frustrated by the inertia of some of his customers: “We have been fighting for a long time to convince our customers that powder coat is a good solution for them. Recently we carried out quite detailed research to understand if there are some changes in this direction, only to find out that even those that have used it are moving away from it.” Geico holds the patent for one of the most power and material efficient powder coating systems and obviously the result of this research was not encouraging: "But we still believe in this.” In fact, Geico has developed a high-efficiency powder coating pump called DPH-06 but generally known as 'ISO-Geico' as it has set a new benchmark in the industry. It has been in use at Ferrari in Italy for the last two years with good results in increasing the quality of primer coating.

Arabnia sees powder painting applications in clearcoat and other processes being driven more by future environmental legislation on VOCs than by the spirit of innovation: “In global terms, the US is very influential in this area, and with Obama’s administration, we may see more aggressive legislation on VOCs etc, and this might give some hope to see more powder coating applications.”

Geico is justly proud of its activities in the BRIC regions, not just in a business sense, but also through the contributions made to local communities: “We are very proud of the turnkey plant we produced for GM, on a greenfield site in Talegaon, India, the first transplant in the country to use 60 per cent local content (of the total spend on plant and labour). We created 1,500 jobs, used 35 of our own people from the nearby Pune office and completed the job in August 2008. We received an award from GM, for running 4.6 million working hours with no delays or stoppages.”

The company is also open-minded when it comes to joint ventures, perhaps a legacy of its multi-owner past. In China, it made a partnership with Miracle to produce a paintshop at SAIC. This was a little different to many Sino-western JVs in that responsibilities were divided by sector as well as size, Geico carried out the engineering, project management and commissioning, and Miracle did all the local construction and installation.

Another example of successful partnership has been with Haden in India. Until 2006 Geico was very little known in the country and though it has long had links with Fiat it was not the obvious first choice for the new joint venture of Fiat-Tata, due to its lack of experience in that market. The new project was a very difficult job as it consisted of partially recovering an existing Fiat plant in Kurla and re-installing it in Ranjangaon and completing it with totally new sections. Geico won the contract after a very long and challenging bidding process with fierce competition from international competitors with apparently much greater experience in India. “The reasons we won this project apart from the obvious one of submitting a competitive price were many, but the most important factor was our partnership with Haden India. Contrary to us they had more than forty years of experience in the country. Even more importantly they were the original supplier of Fiat’s existing plant in Kurla, making them the most qualified to do the recovery job.”

Geico has successfully delivered the first painted body on schedule, finally winning the total trust of the Fiat-Tata joint venture.

Another example of successful partnership is with Falcare in Brazil. This local company has quadruplicated its turnover thanks to its relationship with Geico. They are considered one the most qualified local suppliers for minor plants, conveyors, booths & ovens based on technologies owned by Geico.

In Russia, Geico operates through its partnerships with ABB and Comau and is in process of several bids using its most recent reference: Avtoframos.

According to Arabnia, ‘pay-per-car’, the system where carmakers ‘buy’ each finished body from a paintshop provider which independently operates the entire paint process, has gone out of fashion: “There are many examples of failed projects that used this system. We didn’t see this as an opportunity 15 years ago (when it was popular) and we don’t see it now. It is, I believe, a lose-lose situation for the carmaker and the paintshop provider.” 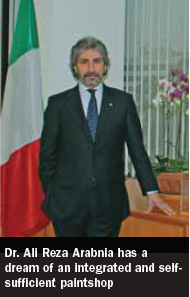 As a former part of the Comau group, some in the industry expected Geico to expand to become full paintshop automation providers, designing bespoke painting robots and supplying paints and coatings through partnerships with chemical companies or at least recommending particular materials suppliers. But the company has chosen to concentrate on its core competence, as Arabnia explains: “In chemicals we have a lot of experience with PPG, BASF and Dupont, but we have no real preferences. We do some studies with PPG as they were originally our partners when they were IVI and part of Fiat.”

In robots, Geico has a preferred relationship with ABB, having worked together on many paintshop projects. Geico has consciously not developed their own robots even when they were part of Comau’s group, in order to keep a high degree of flexibility, and knowing that most of the car manufacturers have their own preferred robot provider.

It would seem that Geico could profit from widening its field; perhaps moving into providing systems for other parts of body-in-white, but Arabnia is not enthusiastic: “We are completely focused and specialized in turnkey greenfield plants for the vehicle body coating industry. We avoid smaller jobs and other fields such as that of general industry, not because of arrogance but due to the simple fact that we wouldn’t be competitive.”

Geico’s core competence is supplying complete automated paintshops for the vehicle industry. The company has a global reach, recently completing turnkey plants for Renault, Iveco, and Nissan in Brazil; Audi in Germany; Renault in France and Romania; Fiat Mirafi ori, IRISBUS, and Sevel Sud in Italy; Avtoframos in Russia; General Motors, MAN Force, Fiat-Tata, Nissan and Renault in India; SAIC in China; GM in Egypt; Oyak in Turkey and Zamyad in Iran. It was established in Italy in 1963 and while it has been through various iterations, it has remained substantially a family run company. It has always enjoyed strategic alliances with prestigious groups such as Carrier, Drysys, Haden, and Comau. Today it is a totally private group owned by the Arabnia Neri family. In addition it has successfully completed the global acquisition of the intellectual properties, patents and trademarks of Haden & Drysys.

Geico is a company skilled in juggling the demands of running efficient business units, yet it does not lose sight of the inevitable impact of painting activities on the environment in terms of energy and emissions, as Arabnia says: “When we talk about energy saving and cost of ownership, we know we are talking about the same issues important to our customers; therefore, they need our focus and serious commitment.” Geico has invested hugely in recent years on a project called Pardis through which they hope to reach, by June 2020, a paintshop self sufficient in energy consumption. Within Geico this date is quite important and is called Energy Independence Day. They are approaching this objective starting with current paintshops, says Arabnia: "For example we can help our customers with intelligent solutions such as J-Jump and J-Flex dipping systems that would save them up to 25 percent space when compared with traditional solutions, resulting in less area to heat, chill, or clean. This means using a lot less energy, water and detergent”.

“Energy Independence Day”. Through an agreement with Fenice of Italy (a subsidiary of EDF the French energy giant), it has been examining car manufacturers’ energy and water consumption together with their paintshop’s levels of emissions in order to base their developments in this field on reliable and realistic data. This is in line with the Six Sigma Methodology used in all the company’s research processes.

“My dream is that by my 65th birthday in 2020, we have plants that are totally self-sufficient in energy terms, using waste to meet all utility demands, and putting out zero emissions”, Arabnia concludes with passion.