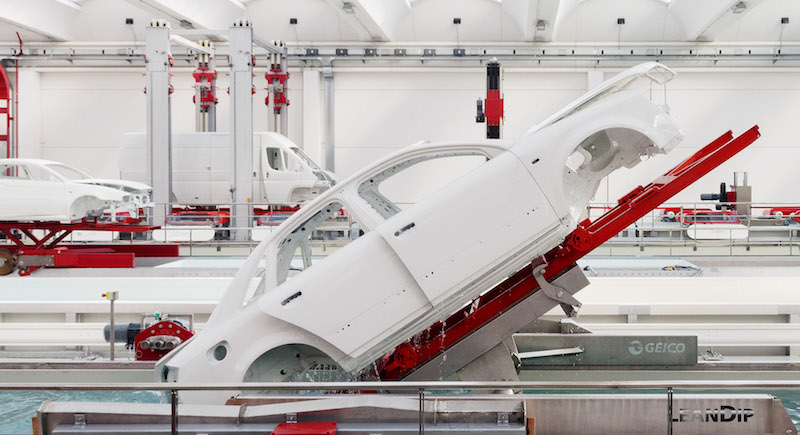 Characterised by its extreme simplicity of operation and maintenance, the LeanDip conveyor system handles bodies continuously and in a stop-and-go process recommended for high and low production volumes. LeanDip allows the body to be moved horizontally and dipped, by rotation, into the painting plant’s processing tank.

The path to LeanDipIn the early 2000s, we developed a product called J-Jump, a stop-and-go conveyor system that made it possible for the customer to skip process stages. This was done for two main reasons. Firstly, to make it possible for the customers to make an initial investment and, at a later stage, significantly increase the production capacity with only a simple additional effort. It meant that the customer could spread investment over a longer period without creating any operational problems.

The other reason that J-Jump was developed was its suitability for processing different types of body material. Let's say you had a body in aluminium on the line followed by another body that was steel. A body could avoid certain kinds of processes and move instead to another kind of process. J-Jump was not intended to suit high production capacity. It was designed to reach around 25 bodies per hour.

LeanDip was developed at the company's Pardis Innovation Centre, which hosts many Experiment Days with invited clients

Other customers were looking for greater flexibility and the possibility to process many different bodies inside the paintshop. At that time, we developed another system electrical conveyor system, J-Flex. This process was able to reach higher production capability and to simulate any kind of movement. Each carrier was independent.

After many years of operating these systems, we noticed that in one respect customers really liked J-Jump because of its simplicity but they wanted greater production capacity. On the other hand, J-Flex customers were happy with its flexibility and the production capabilities but they realised that it required a higher level of maintenance and internal know-how to handle.

So at this point we started to think about developing a system that could somehow provide the best of both worlds; a system that was easy to learn, simple to maintain and which provided flexibility. One that, once installed, wouldn't give you any headaches. Our goal was to create a system that would eliminate electrical rotation operations because that was the main area where customers found complexity. 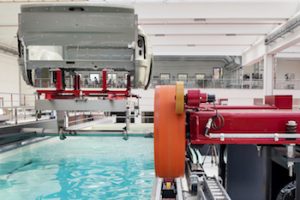 Using mechanical rather than electrical features means that LeanDip is a simpler, lower-maintenance solution

So how do the two systems differ?With LeanDip the carrier travels on rollers, very similar to the J-Jump system. On the side of the tank there are two lines of rollers and on top of the rollers there is a simple mechanical carrier. The carrier is on a central column that allows rotation of the body inside the tank. The difference with LeanDip is that outside the housing is an engine.

When the carrier comes to a stop, the engine turns the central column to rotate the body inside the tank. Then the body moves again before stopping at another engine. It turns once more as the column moves the body outside the tank and then proceeds along. So it's not a continuous system, it’s a stop-and-go system and that's the reason why it can only reach 40 bodies per hour. With LeanDip HP there is no engine in the rollers, it is a friction system. Large wheels push the carrier which turns the body inside the tank and moves it through.

• Simple to operate• The possibility of adjusting the speed of rotation in accordance with the body to be treated• The possibility of jumping the tank • Minimum surface of the conveyor system immersed in the tank; consequently less pollution of the baths• The tank is not as wide as those on traditional systems (the body is supported in the lower part without the use of side arms)• The tank is not as long as those on traditional systems (the dipping and re-surfacing phase occur with a rotational trajectory)• Lower energy consumption because of smaller tank volumes• Smaller footprint because of smaller tank sizes• Low and negligible dragout between stages• Easy to clean and maintain

It is simple for the customer because it's a mechanical system – no electrical activity and no intelligence-led feature on the carrier. This makes maintenance activities simpler and means that operators or maintenance staff never need to go inside the potentially hazardous areas of the tunnel.

It’s a system that addresses many problems – but that’s not by accident. The process was one that our customers have helped to design thanks to the feedback we collect and analyse. At Geico, we regularly organise something we call Experiment Day.

It’s an event where we invite representatives to our Pardis Innovation Centre and discuss their specific needs and ongoing requirements in the paintshop. We learn so much from these events and turn what we hear into new system developments. We have held Experiment Days for BMW, FCA, Mercedes, MAN, Geely and others.

LeanDip is a prime example of this collaborative working, so it is satisfying to know that we have already seen take up in three major manufacturing settings at MAN, Geely Volvo and FCA.