The early years of this decade saw paint solution providers introduce a series of new preparation and application techniques. For their part, OEM carmakers analyzed the new products and technologies with growing interest but, with the exception of a few experimental installations, few contracts were signed.

The reasons were two-fold. Most of the new systems involved powder paints and coatings, to that date a largely unknown application technology that might - or might not - return a consistent, high-quality finish.

Further, and quite obviously, the capital investment to replace already-installed paint systems at carmakers was prohibitively high – a clear case of ‘if it’s not broken, there’s no point in fixing it’. 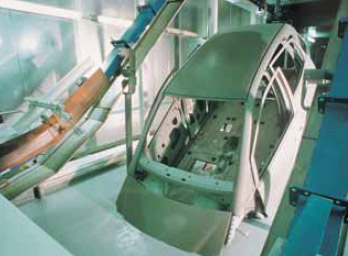 It was a view that didn’t last long. Once the quality of the final finish was proven, the other advantages of the new paint systems won OEMs over, and powder-based technology quickly took a considerable share of the market.

Not least of the benefits was the achievement of increased speed in colour changeover. This aspect, spearheaded by Haden Inc. with its innovative multi-colour powder concept, meant that changeover could be accomplished in four seconds, according to the company, half the time required for liquid paint systems. Additionally, eight different colours could be handled, so meeting the requirements of most production schedules.

The powder innovation was based on a two-layer primer applied in a single booth. The bottom layer in the first zone of the booth was composed of powder that had been recovered from the spray process, and was a mix of all the colours in use. The upper layer, applied in the second zone, consisted of virgin powder. As there was no contamination from layer to layer, the final colour remained unaffected.

“The process we have developed functions through the fairly clever use of some of the material properties of the powder as it is baked and cured,” said Jeffrey Johnson, Haden’s Vice-President of Technology, “(and) in understanding the way the powder flows and behaves during the baking and curing process”.

The key to the system was the recovery of the powder spray from each application zone, the returned product used in the bottom layer application. The thickness of the two-layer primer coat obtained with the Haden process was slightly thicker than the 50 microns of a standard liquid paint primer, but no thicker than single colour powder primer.

Though there was a powder film, Johnson noted at the time that “the greater the film build with powder, the better the appearance of the surface.”

The efficiency of the multi-powder system equalled the 99% powder utilization level of a similar single-colour system, claimed Johnson. “A production line building five to eight thousand vehicles per week would only produce a single drum of waste from the entire powder primer system,” he said.

In 2002, Jack Lewis, Global Vice-President and General Manager of DuPont Performance Coatings, was more cautious about the move to powder.

“We are starting to see a lot more adoption of powder for automobile parts,” he said. “But for clear coats, you have two forces running in parallel. One is the massive investment that our OEM customers already have in place, so they are reluctant to switch to powder just from an investment point of view.

“The other is uncertainty about the technology direction.” Lewis went on to conclude: “At the end of the day, the finishes have to look good and the processes have to be efficient because of the cost.”

Environmental factors have always been a concern when considering paint alternatives. Lewis noted that even in areas such as South America, where there is no legislative requirement dictating the type and level of automotive paintshop emissions, the typical low-solids, solvent-based equipment was being gradually replaced by low-VOC, waterborne paint systems. Meanwhile Asian carmakers were reportedly installing solventborne systems with an eye to later switching to water-borne alternatives, a process not overly difficult despite differences in drying and curing.

BASF Coatings was another paint supplier interested in bringing its own environmentally-friendly water-borne paint solution to market, a primer and paint product sprayed wet-onwet over the electrocoat, with the two baked together in a single process.

Named ‘Twin Prime’, the method was due for introduction in 2003 when reported by AMS, destined to compete head-to-head with PPG’s Power Prime product. The latter’s uni-colour, lead-free dipcoat was already undergoing tests at DaimlerChrysler’s Dodge Dakota plant in Campo Largo, Brazil.

Whatever the new technologies made available for automotive paintshops, the prohibitive cost of upgrading existing equipment, in both time and capital, still usually dictated that only new facilities would employ the latest paint technologies.

To assist in improving existing solvent-based applications, DuPont Coatings & Color Technologies developed methods of reducing the molecular weight and particle size of the solids content in paint, so that it behaved more like a liquid in application. It would then require reduced amounts of solvent thinner to assist in dispersal.

According to the company, this technique compared favourably in product lifecycle assessments with DuPont’s own non-liquid powder coatings, based on total energy use and emissions as measured from production to application.

The technology, labelled by DuPont as Super Solids, could then be used on existing paint lines, with potential savings of $20 million over the cost of replacing a liquid spray line with powder coating technology. 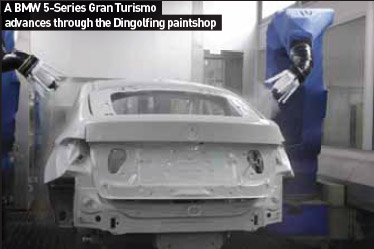 Although it may not be possible to completely remove VOCs from the paint process, over the last decade DuPont (among others) has made great strides in emission reductions. In 2007 Dr. Karl- Friedrich Dussel, the Director of Technology at the company’s Herberts Automotive Systems facility in Wuppertal, Germany, spoke about the EcoConcept waterborne paint system.

“(Electrocoat’s) property of corrosion protection is of critical importance – especially in cavities. The clear coat is indispensible for the visual appearance and long-term gloss of the body,” he said.

So research focussed on combining the function of the primer surfacer with the electrocoat layer, including substrate levelling and stone-chip protection, by using a two-coat or thick-coat acrylic electrocoat and a basecoat combining stabilizing paint.

While powder and powder slurry application techniques remain the technologies of choice, the cost of installing new paint systems at existing car plants still keeps the numbers of completed installations below anticipated numbers.

But while slow, there is still take-up. BMW has incorporated powder clear coat technology - in addition to water-borne powder paint - at both its refitted and brand new paintshops at Dingolfing and Leipzig respectively.

The technology has been a great success, says the company, returning no solvent emissions, no water consumption, no effluents and nearly 100% material usage.

Walter Wimmer, Paintshop Director at Dingolfing, praised the new system. “The powder-based clear coat makes the surface of the car even more brilliant, the body covered by microscopic paint particles.”

Claiming that BMW was the first carmaker to use the powder clear coat in standard production, he went on to say that the technology could also substantially reduce paintshop operating costs.

Dr. Alfred Rutka, director of the BMW paintshop at Leipzig, noted the environmental benefit. “The powder clear coat installation has been a large and long-term investment. We are keen on sustainability. We use no solvents and achieve almost total material usage; we use 95 to 98% of all the powder.” 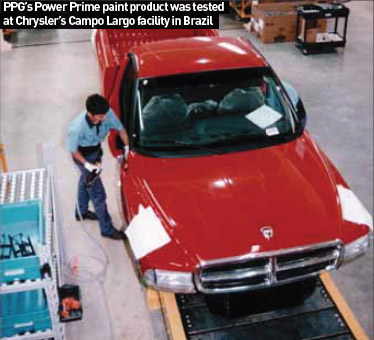 In itself the clear coat powder is an interesting product. Sprayed directly on to the car body (Kuka supplies most of the robotics at Leipzig), it turns the exterior and interior white. Baked and cured, the powder turns into the familiar clear coat finish, returning a smooth surface with none of the ‘orange peel’ effect sometimes found after spraying.

Five cars per hour are spectrometer tested at Leipzig for colour accuracy and paint density, with black cars allowed eight imperfections and silver six before it is considered necessary to re-run bodies through the clear coat process.

To collect the overspray from the clear coat application, the booths have a system of under-floor recovery funnels that lead to filters and dry powder pumps. These re-circulate the unused powder back up to the robot bell pickups. The booth air is also constantly re-circulated so that powder can be recovered from the air.