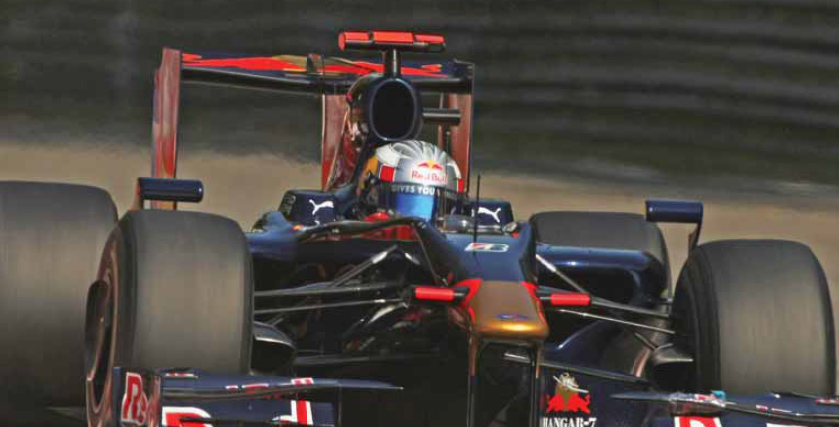 The world of Formula 1 demands highly-compressed lead times, whether for major car developments between seasons, or for smaller scale repair or improvement in the gaps between races.

The ability to implement testing and measurement procedures that bring both quality and speed makes F1 a useful arena for study. One team that thinks it has an edge over its rivals because of its use of leading-edge measurement technology is Scuderia Toro Rosso, based in Faenza, Italy. Quality Manager Pierluca Magaldi believes that they have benefitted from using 3D inspection software coupled to non-contact robotic scanning on an increasing range of components and subassemblies for the past two race seasons.

Specifically, Torro Rosso has been using software called Qualify, from developer Geomagic. It is fed raw data captured by a Faro Laser ScanArm scanner and a Laser Line probe. This combination generates a complete digital representation of the surface of the component – in fact a ‘point cloud’ accurate to 35 microns – that can be compared with the corresponding 3D CAD model of the same part stored within the team’s Unigraphics system in which it was originally designed. The team then has the essential benchmarking data with which it can strive to close the loop between ‘design intent’ and what is actually achieved during manufacture and assembly.

Magaldi says that the team’s use of the technology dates back to the middle of 2007, when a trial led to an initial investment of around 60,000 in the basic set-up of arm, scanner and software. Up to that point Toro Rosso’s in-house measurement had used contact techniques, with both co-ordinate measurement machines (CMMs) and the manual use of micrometers and vernier calipers. Parts that were too geometrically complex for in-house resources were sent to external specialists.

Made to measure
The first step in improving these processes, says Magaldi, was to identify those elements of the cars that were suitable for measurement because of their geometry and the degree of accuracy needed. The next was to prioritise according to the benefits expected from improvement to the particular component or sub-assembly. Apart from engines, which are supplied by Ferrari, around 35 per cent of the cars - including the chassis, rear crash structure, body shell and bonded aerofoil wings - are produced in-house. Light metal castings, machined parts and carbon fibre laminates are bought in, and final assembly is also done in-house.

In the event the first use was for aerofoil wings, since extended to cover the other elements of the exterior shells, including the moulds used for carbon fibre parts, the chassis, suspension systems and numerous inserts.

Once the actual scanning has been carried out, the software integrates the various views into a single, unified 3D data model. Datums and features on which the inspection will be based are created on the CAD model, after which the scanned data and CAD reference model are aligned with each other – a process that again is largely automated, though it may involve some operator intervention. This stage of the whole process is likely to take an hour or so to complete, says Magaldi. With the models aligned, the scan data model is analysed against the CAD model to identify and measure deviations between the designed and physical part. The software uses a colour-map to show the degree of deviation, as well as displaying actual deviation values along with geometric dimensioning and tolerancing (GD&T) call-outs. Overall time savings for this inspection procedure is in the region of 30 per cent compared to the previous processes, says Magaldi.

Contrasting elements
The contrast between this basic procedure and the previous practice is fundamental. Formerly, individual measurements would be made at specific points on the component, and analysed for deviation by using the corresponding 2D drawings. Inspection was, by definition, selective and not holistic.

Moreover, the previous method was fundamentally inefficient for an organisation producing limited numbers of parts which are expected to perform in extreme conditions. As Magaldi points out: “Production runs for our components range from one to maybe 30-40 for a complete season. So we are definitely a prototyping company, even though the prototypes we produce are used for racing.”

Magaldi does, however, concede that the combination of scanning and software-based analysis will not supercede older methods entirely. The use of CMMs, for instance, will continue for the foreseeable future for parts where accuracies of “just a few microns” are necessary. One example is gearbox casings. When the raw castings are delivered to Toro Rosso they are checked with the scanning system, but once they have been machined to their finished state then only the CMMs can deliver the necessary degree of accuracy for final measurements.

But where the scanning system is applicable, then Magaldi has no doubts about its appropriateness or its benefits. The information generated is fed back to both manufacturing and design offices, and has, he states emphatically, “increased the quality of many processes”.

The impact of the new measurement system has also been seen outside the company. Magaldi reports that at least one supplier was so impressed that it started bringing parts it had manufactured to Toro Rosso for inspection. So the F1 team acted as an external quality control service provider to its own supplier. Since then, a number of other suppliers have invested in similar systems of their own.

Within Toro Rosso, the system has now advanced beyond its initial application. Quite early on the team bought reverse engineering software to allow the system to scan and record details of the items that need to be customised to the individual drivers – crash helmets, steering wheel grips and the like.

Magaldi now envisages a much more ambitious use of the technology, which is for scanning and recording the whole car after assembly, to check its compliance with race regulations. He concedes that it would be a big step to take, and does not have a timetable. It is, though, “one for the future”.

Testing for diesel NOx in Chicago

Meanwhile, on the other side of the Atlantic, impending legislation has played a role in the major upgrade of a quite different sort of test installation.

The heavy duty engine facility at the Chicago Test Center of automotive engineering consultants Ricardo has undergone a $250K rejig, which prepares it for the Jan 2010 legislation covering particulate and NOx emissions by diesel engines sold into the US market.

The US Environmental Protection Agency (EPA) officially designated EPA 40CFR Part 1065 to consolidate a previous dramatic reduction in permitted particulate emissions, and to introduce new reduced level of NOx emissions that are just one sixth of those previously allowed. Graham Weller, product group director for diesel at the Chicago Center, describes the new rules as just about the “most restrictive in the world”.

The Center employs around 50 people in the testing of medium to heavy duty engines for both on- and off-highway use. A parallel Ricardo facility in Detroit employs four times as many in the testing of smaller engines, mainly for passenger cars, though Weller indicates that at present it is having to find work outside of that remit. 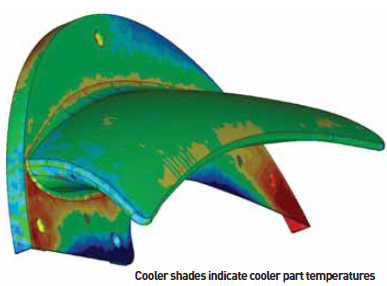 Weller says that the emission levels permitted from diesel engines sold into the US market from next year will, as a consequence, be 90 per cent less than those allowable back in the 1990s.

This ramping up of legislative limits has had implications for associated testing procedures. The 2007 rules meant that supporting laboratory facilities needed to be at what Weller described as “pharmaceutical industry standard” for handling and processing the filter papers used to capture particulates in engine exhaust streams.

The new legislation has meant further investment at the Chicago Test Center, including supplementary electrical heating of the test installation (to avoid the possible distorting effects of condensation), and the introduction of a pressure control system with a variable fan, more refined flow control and software upgrades.

A major implication of EPA 40CFR Part 1065 for reduced NOx levels is that the flow rate of test samples through the whole installation must be reduced. This is because the generally accepted method for testing diesel engine exhausts in the US is the constant volume sampling (CVS) technique. This involves mixing engine exhaust with a continuous flow of filtered air, and then maintaining the flow at a constant level throughout the testing process.

For the Chicago installation, this means doing so as the mix flows first into 18” diameter tubing some 35 feet long, where the NOx testing is carried out, and then into succeeding, smaller sections down to tubing 1” in diameter and three feet long, where particulates are collected. The test procedure lasts 20 minutes, says Weller, during which the engine is put through a simulated drive cycle. So emissions vary while the air flow into which they are injected remains constant.

Weller says that the Chicago facility is currently the only independent laboratory in the US – there is one operated by the EPA itself – that can carry out testing against the standards demanded. He says he expects continuing demand for its services.

They are blowing bubbles at the Motor Industry Research Association (MIRA) in the UK. Quite literally - because bubbles of just 3mm diameter, made from a soap solution but filled with helium, are an essential element of a new test procedure being developed to help study the aerodynamic drag generated by vehicle motion.

The bubbles are being used in MIRA’s wind tunnel – the only one in the UK able to test full-size vehicles – to visualise and so help investigate the ‘wake effect’ produced by a moving vehicle by which turbulence tends to pull it backwards. Angus Lock, head of aerodynamics at MIRA, says the bubbles are making it possible for the first time to carry out whole wake analysis in real time. They have neutral buoyancy, and when injected into the air stream behind a vehicle behave as if they were an equivalent volume of pure air. Their outer surfaces are reflective enough for motion to be captured by a battery of a dozen high-speed digital cameras.

The origins of this technique go back around four years. At that time techniques to examine air flows over vehicle bodies ranged from wool tufts attached to the surface, to smoke wands, and to laser-based methods such as Doppler anemometry. Though these approaches offered some ability to study wake effects, the combination of complete and instantaneous observation could not be achieved. MIRA used the Motion Analysis Research and Rehabilitation Centre (MARRC) at the University of Worcester, UK, a unit which specialises in the physiology of human movement for medical and sporting research. MARRC suggested inserting visual markers into the air flow, and first suggested polystyrene balls.

With the idea of using bubbles came the introduction of UK company Vicon, which makes cameras used for creating special effects in the film industry. These capture the movements of human actors wearing reflective markers so they can be replicated for digital characters.

The MIRA wind tunnel makes use of Vicon T40 cameras which have a resolution of 4 megapixels and can run at 2,000 frames per sec, though Lock says that around 400 frames per sec is sufficient for his use. The floor and walls of the wind tunnel have been painted matt black to aid visualisation. The MIRA installation is still in its trial phase, and is not likely to be used for real research until mid-2010. At the time of writing, air flow had not exceeded 14m per sec, whereas normal testing speed is 26m per second.

But Lock is confident that the installation will be able to do more than just investigate the drag effects produced by the slipstreams. The installation has a turntable which means it can also examine the downstream effects of side winds, as well as the ‘unsteady’ aerodynamic characteristics of motor bikes and top-down convertible cars.