Strong, stiff and light, these properties make composites a compelling proposition for the manufacture of tooling and production aids 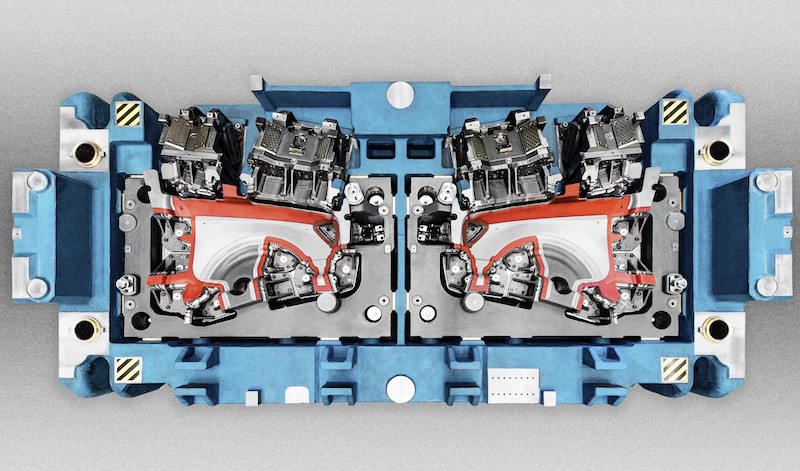 In sheet metal forming, epoxy resin dies were first used in the 1950s. These thermosets were often filled with steel powder or sand to increase their wear resistance and mechanical properties. Filled polyurethane (PU) started to be used in the 1970s. Most recently, high performance polyamides (PPAs) have been employed. These thermoplastics are reinforced with glass fibres and a number of fillers to improve wear resistance, mechanical strength and lubrication.These dies are quicker and cheaper to produce than their metallic counterparts. Despite these advantages, polymer composite dies lack strength compared with conventional die materials. Further, because the mechanisms by which they fail are not fully understood, dies are still designed on the basis of experience and intuition, often employing the design rules established for metal dies. All of this means that the use of composite forming dies has been for the most part restricted to small-batch production and the manufacture of prototype parts.

At its press shop in Ingolstadt, Germany, Audi has used multi-material construction methods to produce tools that it claims are up to 20% lighter and 10% more stable than conventional alternatives.

Conventional press tools are made of cast iron and can weigh up to 45t. Through the selective use of cast iron, aluminium and plastics – and techniques such as additive manufacturing – Audi has reduced the weight of these tools by up to 8t.

Further, the carmaker has improved the stability of the tools by altering their design fundamentally compared with that of their predecessors. In the press, a tool is subjected to forces of up to 2,500t. This stress is increased by the constant repetition of forming or cutting operations. In order to cope, conventional tools feature cast-iron cross-ribbing, the configuration of which is adapted to the sheet-metal parts being produced.

In Audi's lightweight tools, arched shapes in their basic structure impart a high level of stability and thus improve the transmission of forces. Some of these shapes are derived from nature and resemble leaves or the bones of a human skeleton, for example. This ensures good stiffness and reduces the amount of material needed to produce the tools by some 20%.

Improving tooling efficiencyAudi says that the new tools enable the faster, more precise processing of sheet metal and are subject to less wear and tear. In total, the carmaker claims to have achieved an energy saving of over 10% through the use of these tools.The head of toolmaking at Audi, Michael Breme, says: “With this lightweight and composite construction, we are setting new standards at Audi Toolmaking. This enables us to produce even more flexible and more efficient tools with the highest quality and to further optimize our manufacturing processes.”

"Carbon fibre is ideal because it improves process performance by dramatically reducing deflection, vibration and it is lightweight" - Toni Roda, ABB Robotics

Composites could have significant potential for of the production of jigs. This potential is illustrated by the first carbon fibre-reinforced (CFRP) jig to be used in North America, which was employed to install the bonnet of the Ford Mustang some ten years ago.

The lead researcher on the project, Western Washington University Vehicle Research Institute (VRI) director Eric Leonhardt says: "At the time we built our hood jig, I was aware of one other application in the UK in which a composite tool was used in automotive assembly."

At what was known as the Auto Alliance International (AAI) plant in Flat Rock, Michigan, the Ford Mustang launch team planned to use a welded, square tube jig to support the bonnet and align it with the vehicle.

Light-weighting the toolsHowever, this jig weighed 16.8kg and it became clear that a single operator using it would be lifting more than the recommended weight limit for an eight-hour shift. An overhead balance could be employed to negate this problem, but this would require significant additional capital to be invested in the assembly station and would slow the bonnet installation operation – increasing the chance that the operator would not use it.

In response to these problems, the VRI team developed a lightweight jig comprising a centre section of prefabricated carbon fibre-faced aramid honeycomb core with two machined wrought aluminium end pieces bonded to either end. This initial base just weighed 3kg. Aluminium locating features were then bolted to this structure, increasing the jig's weight to around 5.4kg – light enough to be manipulated by a single operator without any assistance.

Since its introduction in 2006, several hundred thousand vehicles have been produced using this composite hood jig.

Swedish company TETRAFIX has developed a system to build complex, modular fixture frames out of CFRP tubes. The use of a frame design reduces the amount of material needed to manufacture the fixture – keeping down both weight and costs. The company claims that the resulting structures are extremely strong and stable.

The low mass of the fixtures means that they are easy to move around; the company’s heaviest fixtures – for a complete car body side – weigh just 40-60kg. The majority of these fixtures are light enough to carry and the larger fixtures are all equipped with wheels – eliminating the need for cranes and other heavy lifting equipment in the measurement room, and reducing the time needed to change them around in comparison with conventional metallic alternatives.

Reduced need for fixture calibrationFurther, CFRP demonstrates negligible thermal expansion, meaning that the geometry of the fixtures does not change in response to the climate – the dimensions of the tubes are as constant on the factory floor as they are in a temperature controlled measurement room. This reduces the number of times that the fixtures need to be calibrated.

TETRAFIX’s fixtures are already in use with Volvo and the company has recently received orders from Germany and China. TETRAFIX has also launched CFRP end-of-arm tooling (EOAT) for metal stamping and plastic moulding applications. 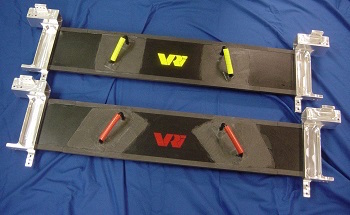 ABB first began working with CFRP EOAT in 2008. Toni Roda, portfolio manager – press automation solutions at ABB Robotics, says: "Carbon fibre is ideal because it improves process performance by dramatically reducing deflection, vibration and it is lightweight. Its advanced mechanical properties also allow for the design of lighter and stiffer end-of-arm tools that can handle heavy parts at high speeds.

"Many robotic applications such as press automation, material handling and parts assembly are using carbon fibre tools. This is due in large part to the fact that manufacturing processes are becoming more automated, simplified and the cost of raw material is coming down."

With a length of 1,450mm, ABB's CFRP Boom is an extension of the robot arm and it remains attached to the robot wrist during production changeovers. It is able to handle weights of up to 100kg. ABB's CFRP Gondola arms can be used with both 6- and 7-axis robots. Aluminium components can be connected to the CFRP tools using quick-change systems, enabling them to be adapted for the handling of different parts.

Roda says: "The advantages of carbon fibre tooling can be summed up in three words: Lightweight, stiff and resilient. In addition, complex geometries with excellent mechanical properties can be easily produced thanks to the latest manufacturing technologies."

These tools can be used as a drop-in replacement for conventional tools. Roda concludes: "The design of our carbon fibre tooling considers the compatibility of installed equipment. Most of the components can be re-used. On occasion some structural components might need to be replaced." 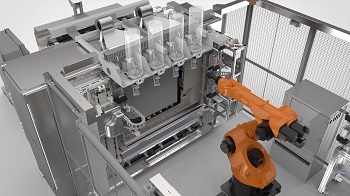 For example, a three-dimensionally (3D) printed composite trim-and-drill tool has received the title of ‘largest solid 3D printed’ item by Guinness World Records. The 5.3m long, 1.7m wide, 0.5m high tool was printed in 30 hours using carbon fibre-reinforced acrylonitrile butadiene styrene (ABS) by Oak Ridge National Laboratory (ORNL) and it will be tested by Boeing in the building of its 777X passenger jet.

Stratasys, meanwhile, has unveiled its Infinite-Build 3D Demonstrator, which prints on a vertical plane enabling practically unlimited part size in the build direction, the company claims.

Ford will evaluate this new technology and has said that one of the immediate applications it is exploring is tooling. The technology could enable significant reductions in lead times for large and complex tooling, which would allow more time for vehicle optimisation in the development cycle.

Further, Stratasys says that the ability to produce large and complex inspection and assembly fixtures in-house could improve the quality of vehicles and the safety of operatives on the manufacturing floor.