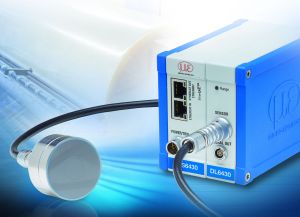 A new sensor system that combines an eddy current sensor with a capacitive displacement sensor in a single housing has been launched by Micro-Epsilon. The company claims this sensor concept enables high precision one-sided thickness measurements of plastic film or coatings applied on metal objects, plates or sheets.

Connected to the sensor via a cable, the combiSENSOR controller processes and calculates the signals in order to output these via digital interfaces. It’s claimed the calculation of the two sensor signals compensates for any mechanical changes to the target object/material, such as thermal expansion, deflections or eccentricity.

A web interface facilitates the set up and configuration of the sensor. The controller also features digital Ethernet and EtherCAT interfaces for integration into the user’s own production control environment.