What does a heavy truck parts supplier to do when its competitors are moving production to cheaper locations, the local high-skilled labour pool is shrinking rapidly, and its business is continuing to grow?

Dutch machining specialist Doesburg Components, a Tier One supplier to DAF, Leyland Trucks, and Deutz, turned to technology avoid the problems of staffing shortages. For the past five years, Doesburg’s growth has been over 20 per cent per year. It has a hand in several market segments, but over 50 per cent of its turnover is for the expanding European heavy truck and engine market. However, like much of the rest of the Western industrial world, Doesburg’s corner of the European Union is suffering from an acute shortage of skilled labour. The ageing population of machinists in and around Eindhoven in the Netherlands and in nearby Germany are in high demand from manufacturers. Meanwhile, the local youth are not interested in entering the skilled trades and “getting their hands dirty,” says Jos Smeets, Managing Director of Doesburg Components. 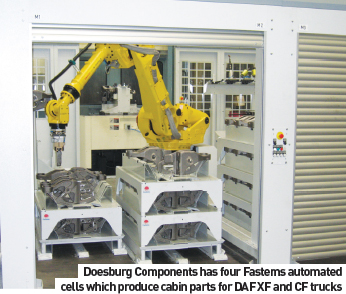 Building for the future

Faced with these constraints – including the fact that its main customer, DAF Trucks, will soon be eating up what’s left of the skilled labour market over the next few years – Doesburg turned to Finnish automation specialists Fastems to provide it with the means of turning out truck and engine components without the need for extra labour. Doesburg currently has four Fastems automated cells turning out cabin brackets for DAF XF and CF trucks. “Our experience with the Fastems system was positive,” Smeets tells AMS. “We’ve found this is a good way to build for the future.”

A new project, involving the installation of a Fastems Flexible Manufacturing System (FMS), is set to begin production in October. “The new FMS project started out as an investment proposal with Leyland Trucks. Paccar is very active in getting involved at the supplier level and told us that if we saw opportunities to reduce costs or improve quality to send a proposal. We saw some opportunities to improve output and quality with a couple of parts – steering box brackets, tilt brackets, and big flywheel housings for 9.2 L DAF motors, and the same for Leyland,” says Smeets. “We felt that by using an FMS we could automate the process, thereby reducing set-up time by 50 per cent, as well as improving output.”

Fastems’s FMS technology involves one or more machining centres integrated into one cell with a transport device carrying pallets between machines, loading stations and buffer stations – all operated automatically via computer control. “In an FMS system, the work is loaded into the system during a manned shift. During the unmanned shift it is automatically machined and transported between machines and stations,” explains Fastems’s Pauli Partti.

The system being supplied to Doesburg consists of two lanes for two sides of fixtures. “We can store them in two levels, so in total we’re talking 16 fixtures we can store within the system,” says Smeets. The FMS runs a stacker that is capable of picking up the right fixtures and putting them on the machine, thus reducing set-up times. We are currently doing this manually: we have to pick up a fixture, set it up, and then run it. If we can do it automatically, we should reduce setup by 50 per cent.” 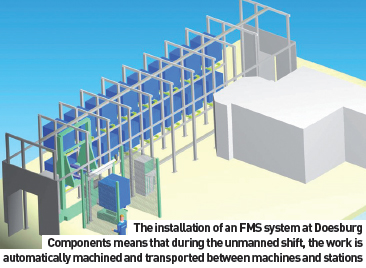 The art of flexibility

“Normally we run three shifts, but with the new FMS system we’ll be able to run eight hours without interference. For two shifts, we can set up the machine, load all the fixtures, clamp the parts, and create a program to handle the fixtures and the sequence. For weekend operation, on Fridays we load the machine and on Sunday all 16 pallets are completed. Flexibility, as I see it, is the main benefit it will bring us. You can load the complete system with 16 pallets, which for us means eight different parts, and these part numbers can be produced in any sequence we want. If you have to produce one part or 10 parts, it’s possible to make one program and that will control the sequence that the machine has to run.”

Partti says Fastems is integrating its FMS system around a Nigata 800mm horizontal machining centre that’s already in use at Doesburg. He says this is typical of most FMS integrations. “We have the ability to build systems in which we integrate machinery that is already in existence at the customer. In many instances we supply systems with new machines, but we also integrate existing ones. All the systems we’ve supplied to Doesburg have involved integrating machines that existed before we came on board; they just purchased the automation to increase their productivity.”

Paretti believes the system currently being installed at Doesburg makes provision for expansion at a later date: “There is a provision to integrate a second machine tool later. That applies to all our systems – they’re all easily extended when required.”

Filling the gaps in the labour force

How will the technology fit into Doesburg’s future? As Smeets sees it the company will gain in two ways. First, it faces a shortage of skilled labour, so the system will allow it to fill gaps in its labour force. “We’re going to need less employees to make the same number of components.

When the system is running at 90 per cent capacity, we’ll need one operator per shift. Because we can also extend the system to another machine, we can use it for two 800mm machines, and thus reduce labour costs even further.

Second, it will change the way Doesburg produces in the future. “The system is currently laid out for our bigger machines, but we already have plans to use the system for our smaller ones. That will be done for four machining centres – we hope to do that next year.” From Fastems’s perspective, the firm is happy to provide equipment to customers that will allow them to stay local, employing European talent while remaining competitive against manufacturers moving their production further away.

“We have provided Doesburg with the ability to automate its existing machinery so it can improve productivity, be more competitive and be more flexible to produce when there are no personnel on site,” says Partti. “That’s Doesburg’s goal – the company wants to keep production in the Netherlands and still be competitive with those companies who are moving production to China or India.

And that’s our goal, to help customers stay where they are and still be competitive.”