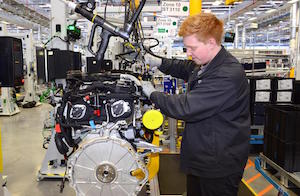 UK – The engine, which will debut in vehicles this summer, marks the completion of the first phase of the Engine Manufacturing Centre (EMC). The $1 billion plant in Wolverhampton, West Midlands, was opened in 2014 to supply the OEM’s three vehicle factories in the country.

The manufacture of this first engine follows the announcment last week that the OEM would produce the 2.0-litre 300PS Ingenium petrol engine, the most powerful four-cylinder engine it has ever made, for the 18MY Jaguar F-TYPE.“The start of petrol production marks an important milestone for the plant as we move to providing a suite of ultra-low emission, high-performance petrol and diesel engines to power the full Jaguar and Land Rover vehicle line-up now and in the future,” commented Trevor Leeks, EMC operations director, Jaguar Land Rover.

The petrol engine has been added to the existing line-up of 2.0-litre 150PS, 163PS and 240PS four-cylinder diesel engines, of which the EMC has made more than 400,000 since its launch.

The EMC employs 1,400 people, who have received over 125,000 hours of training. The plant has also accepted 50 apprentices and graduates on its powertrain programme.