Ford’s India plants to be operated by Mahindra

Ford and Mahindra recently signed an agreement to form a new joint venture, with Ford owning a 49% stake and Mahindra owning a 51% stake. The idea behind the new partnership is to develop, market and distribute vehicles from both companies in emerging markets around the world. 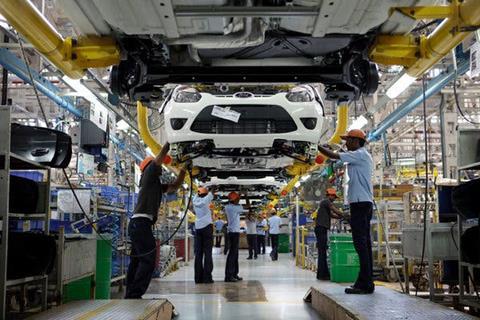 ”At Ford, our purpose for 116 years has always been to drive human progress, and that won’t change,” commented Jim Hackett, Ford’s president and CEO. “But to continue to do that, we need to evolve with new and faster ways of not only delighting our customers around the world but also solving their very different needs. Strong alliances like this play a crucial role in assuring we continue to achieve our vision while at the same time staying competitive and delivering value to our global stakeholders.”

Ford’s assembly facilities in Chennai and Sanand will become part of the joint venture, and will therefore be controlled by Mahindra. The plant in Chennai currently houses production of the Ford EcoSport and Endeavour, with an annual capacity of 200,000 units. The Ford Aspire and Figo are made at the larger Sanand plant, which can make 240,000 units per year.

Although Mahindra will take control of vehicle assembly operations, Ford will retain its engine production facility in Sanand. This is on the same site as the assembly plant, and has an output of 270,000 engines per year.

The partnership between Ford and Mahindra started back in September 2017. As well as changes in manufacturing operations, the joint venture is expected to result in the launch of three new utility vehicles under the Ford brand, beginning with a midsize SUV that will have a common Mahindra product platform and powertrain. The two companies are also reportedly looking to develop electric vehicles together.