Ford will invest €42m in its Valencia manufacturing plant to support the its electrification strategy with a state-of-the-art battery assembly facility, in addition to producing the new S-MAX Hybrid and Galaxy Hybrid models 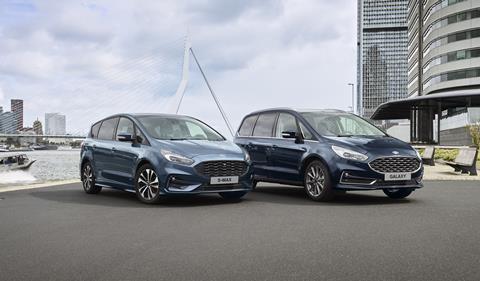 Ford invests in battery and hybrid production at Valencia

Two new assembly lines at the Spanish facility will enable  advanced lithium-ion batteries to be produced alongside the vehicles, which Ford says will improve manufacturing efficiency and sustainability. Delivered through a €24m investment, the new battery assembly facility will begin production in September 2020.

An additional €8m investment in new tooling and assembly line upgrades at the Valencia plant has been made for production of the new electrified S-MAX and Galaxy variants, which are powered by a 2.5‑litre Atkinson cycle petrol engine, electric motor, generator and lithium-ion battery. A further €10m investment supports production of the all-new Kuga Hybrid SUV.

“With electrification fast becoming the mainstream, we are increasing our investment in Valencia to provide even more electrified models and powertrain options for our customers,” said Stuart Rowley, president, Ford of Europe.

Ford says it has invested €3 billion in its Valencia facility since 2011, including €750m to support production of Kuga. The S-MAX Hybrid and Galaxy Hybrid share Ford’s latest full-hybrid architecture introduced with the all-new Kuga Hybrid, incorporating a water-cooled lithium-ion battery mounted in a crash absorbent, waterproof structure beneath the vehicle’s underbody. The company also produces the Mondeo Hybrid and Mondeo Hybrid wagon models at its Valencia facility.