The investment will support production of the Super Duty from Ford’s high-volume F-Series of trucks. 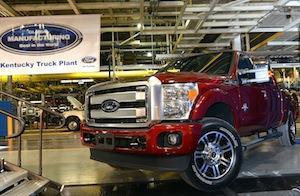 Ford is investing $700 million in Kentucky to increase vehicle manufacturing with the expected addition of 500 factory-floor jobs, it said.

Some of the investment will be used to support production of the U.S. brand’s new Super Duty truck from its high-volume F-Series built at Kentucky Truck Plant, the company said.

The company also recently broke ground on its previously-announced battery production facility in West Tennessee, dubbed BlueOval City, where it will invest $5.6 billion and create 6,000 jobs. Production is scheduled to start at the plant from 2025.

Ford announced earlier this year that it is investing $50 billion to ramp up electric vehicle production globally.

“With construction underway at BlueOval City, Ford – America’s No. 2 electric vehicle brand – gets closer to its target of a 2 million EV production run rate globally by late 2026,” Ford said in a statement.