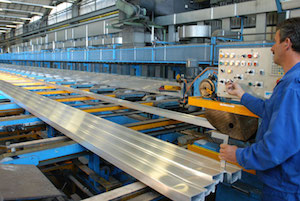 Czech Republic - The supplier has announced that it is building an extension to its facility in Decin, which houses the production of customised aluminium extrusions primarily used in automotive and industrial applications. Construction is expected to finish in October 2019.

The facility currently has an integrated foundry and 12 presses for direct and indirect extrusion production, as well as equipment for additional downstream operations such as sawing and milling. A new casthouse and extrusion press will be added with the expansion, allowing the company to make more products in its portfolio such as crash management systems.

Back in 2015, Constellium said it was expanding its Decin operations to increase production of hard alloy extrusions. The supplier has also been building new plants in other parts of the world to meet growing demand for its products, like Mexico for example. It recently announced that it was providing aluminium for the new Mercedes-Benz CLS model.