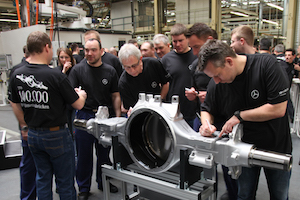 Germany – The plant has now produced 100,000 truck axles using induction pressure welding (IPS in abbreviated German). The technology enables the joining of steel and cast parts with any contours, says parent company Daimler, claiming it is “unique in the world”.

In IPS, the main body or housing of the axle is made in three parts and can be adapted to regional vehicle and market requirements. Previously, it consisted of a single piece of cast-iron or steel; now, the central section is a welded steel construction, while the two end sections are made of cast iron because of their complex geometries.

In the first stage of the IPS process, the area to be joined between the two parts is heated by magnetic induction. Once the casting material has almost reached melting point, the two components are subjected to high force in a press, in the second stage of the process.

“The innovative IPS welding technology emphasises the importance of the Kassel plant as a global competence centre for the production of truck axles,” said Frank Reintjes, head of Global Powertrain and Manufacturing Engineering at Daimler Trucks. “This technology was developed and brought into series production for the first time at our Kassel site.”

In addition to developing the welding technology itself, Kassel personnel also designed and constructed the IPS production machine. In the past, the supply of axle housings was outsourced, but following the launch of IPS production in 2012, the components are now manufactured competitively at Kassel.