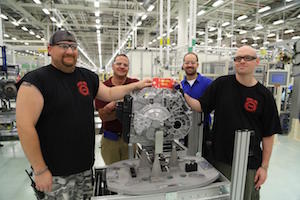 US – The OEM will unveil its fourth World Class Manufacturing Academy (WCMA) site at Tipton, Indiana, this March. The $2.1m centre, funded by FCA US and Unite Automobile Workers (UAW), will serve personnel from the Tipton Transmission Plant (TTP) and the UAW National Training Center (NTC) Kokomo.

“FCA US and the UAW have a responsibility to develop the current and next generation of workers to continue supporting the production of some of the world’s most recognisable automotive brands,” said Lori Hoback, FCA US Co-lead – WCMA Indiana. “When we invest in our people, we invest in our products and our customers. Everyone wins.”

FCA says that the Tipton facility is modelled on the original academy in Warren, Michigan, which was opened in January 2012, and will provide “hands-on training in a flexible, open concept environment”. The curriculum has been tailored to meet the needs of the 8,200 employees at TTP and the NTC; Indiana is FCA’s hub for transmission and casting production. Pilot classes began in January 2017 to finalise the curriculum as well as to certify the staff. Employees learning at the academy will gain shopfloor experience at any of the five local plants. The NTC will focus on technical training for skilled trades and engineering groups, working in partnership with Indiana University, Purdue University and Ivy Tech Community College.

The year after opening its first academy site, FCA also launched the WCMA Mobile Unit to bring training directly to the plant floors. In the following 12 months, the vehicle-maker expanded its Warren academy by 15,000 sq.ft and established a satellite facility in Saltillo, Mexico.