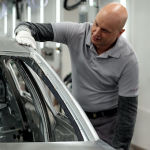 Figures released by Porsche show that the company has increased its workforce by 13% in the past 12 months. The Stuttgart-based car maker says that after nine months of 2016, its team has expanded to 27,115 employees. It’s the latest announcement on a trend which has seen Porsche’s employee headcount double in size over the past six years.

A key part of that growth has been the 600 additional jobs created with the opening of Porsche’s new body shop at its plant in Leipzig. Costing around €500m and taking just under two years to complete, this latest expansion will accommodate complete production of the new generation Panamera.