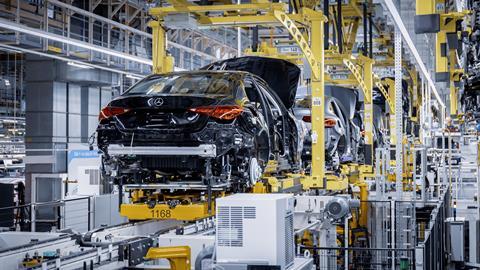 For the production of the new C-class, Mercedes has taken the opportunity to add flexibility by way of cellular manufacturing in the body shop and with so-called ‘TecLines’ for assembly. Illya Verpraet found out more.

Mercedes-Benz has recently started production of its mid-size sedan and estate, the C-Class, at its plant in Bremen alongside the GLC and GLC Coupé SUVs and the fully electric EQC SUV. With the full gamut of powertrain layouts and body styles assembled on the same line, the plant needs to cope with a lot more variety than when it started passenger car production in 1974 with just one model, the S123 estate.

Flexibility is therefore the order of the day, starting in the body shop, where Mercedes is implementing a new system that uses production cells that can be flexibly combined with each other.

The flexibility to handle the large variety of vehicles Bremen produces is the decisive advantage, says Dr Claus-Dieter Reiniger, who looks after process development of body shop technologies at Mercedes-Benz. “Different model and powertrain variants can now be flexibly configured and produced at the body shop stage. The new body shop concept is our answer to increasingly short model cycles and above all to changes in the structure of electric mobility.” 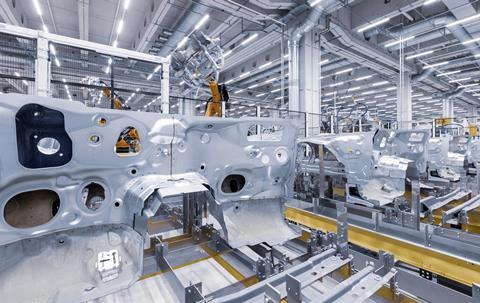 The body parts are processed in different production cells, which can be flexibly combined with each other.

A variety of methods is used in modern automotive production to join the different body parts, but in a traditional body shop layout, they have to be performed on a fixed production line. In Bremen, each method gets its own station, or ‘cube’, as Mercedes calls them. Components and assemblies are transported between stations using automated guided vehicles (AGVs). This increases flexibility, as the cubes can be skipped if not required for a certain vehicle, and it is possible to add or remove production bays at a later date.

The starting point is a central ‘parts supermarket’ where carts are loaded by workers assisted by an intelligent picking system. The parts are then transported to so-called GEO-stations using AGVs, where they are lined up to be joined together and processed further.

In order to maintain the correct vehicle sequence during body shop production, Mercedes uses a control system that connects the AGV transport system, the production bays and the ‘supermarket’. This allows digital visualisation of the overall production status, and of which model is being processed in which production bay.

That control system is part of Mercedes-Benz’ new digital production ecosystem called MO360, which it uses worldwide for the whole production process to bring together data and important software applications for central visibility and control. It collects real-time data from machines, production control, and allows vehicles to be tracked live through the factory, all making it possible to have this higher degree of flexibility. 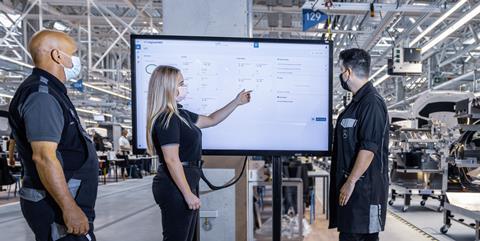 Production data flows automatically into the digital shopfloor management system SFMdigital, which is connected to MO360, giving full visibility at all times (image from Factory 56, Sindelfingen)

The cell-based production system isn’t just a trial, either. Mercedes plans to roll out the new body shop concept in its plants worldwide. Production of the C-Class will soon also commence in East London, South Africa, and Beijing, China, where the flexible production system will be rolled out as well.

“Our Bremen team has done a great job in the last few months. Despite the challenges imposed this year, our employees have successfully managed the start-up of the new C-Class and at the same time provided optimal support to our colleagues in the other C-Class plants, said Michael Frieß, location manager and head of production at the Mercedes-Benz Bremen plant.

While the cell-based system’s main benefits lie in dealing with a large variety of models, it is not just suitable for high-volume plants like Bremen and can be applied to smaller, more specialised plants.

Reiniger says that the implementation does not require any major changes in the plant and that it did not require any particular training of the employees, as they receive continuous training. However, the adaptations are a big enough job that it only makes sense to do it for the introduction of new models, as the layout differs too much from conventional set-ups.

Watch the upcoming AMS Livestream on May 26 on the Factory of the Future: The Software-Defined Assembly Line, for insights on digital production tools, digital twins and production connectivity, featuring Audi, ABB and Cosmo Tech.

The replacement of fixed production lines with more flexible AGV-based systems doesn’t stop with the body shop. Following the example of the Sindelfingen ‘Factory 56’ plant, Bremen has also replaced much of the assembly line with what Mercedes calls TecLines. 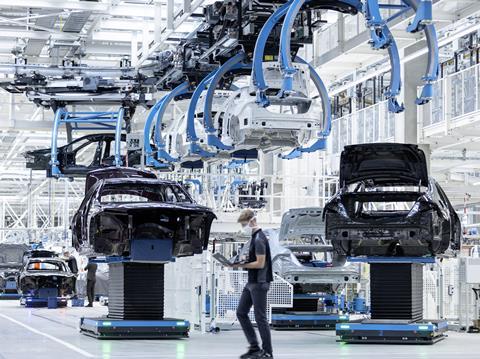 With TecLines, cars are carried by driverless vehicles, allowing individual cars to be diverted for additional production steps (image from Factory 56, Sindelfingen)

As with the cellular bodyshop, TecLines replace fixed assembly lines with driverless transport systems. The benefit is that they can operate like a traditional assembly line for some operations, but also switch to ‘cycle operation’, where the cars stay in position for multiple or longer operations. The other decisive advantage is that the assembly line can be easily and quickly changed or expanded without the need for any modifications to the building.

Reiniger says: “The key consideration is maximum flexibility: both in Bremen and in Factory 56 at the Sindelfingen location, a new TecLine represents the assembly system of the future. The TecLine groups complex production technology at a central point. This means that conversion work can be done more rapidly and easily. Fixed production lines will be replaced by AGVs so that changes can be flexibly implemented. This particularly applies to model or technology changeovers, such as electric vs. combustion engine.”

For the time being, the TecLines won’t replace conventional assembly lines completely, as Reiniger explains that the flexible conveyor lines make particular sense in assembly areas with a high degree of manual work. “In Bremen we use them, for example, for the interior fit-out (routing of cables, basic electronic equipment), as changes occur most frequently here,” he explains.