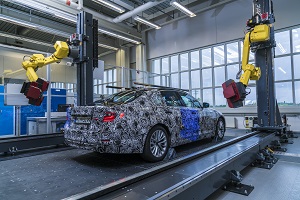 Germany – Production of the seventh-generation vehicle will ramp up by the end of the year, ahead of a market launch in early 2017. An investment of several hundred million euros has enabled the refurbishment of the plant and the construction of additional facilities, including the adaptation of drivetrain installation and a new bodyshop.

“Dingolfing will remain our competence centre for production of upper-class BMW series,” commented Oliver Zipse, BMW’s board member for Production. While Dingolfing will serve as the lead plant for the 5 Series within the OEM’s global manufacturing network, Magna Steyr will start producing additional units at its Graz plant, Austria, from early 2017.

Dingolfing has become unable to handle the expected volumes after adding the 3 Series and 4 Series, producing 350,000 units per year. According to plant manager Josef Kerscher, the integration of these models “proves that we are competitive and makes us less dependent on the lifecycle of our large-model series”. Despite the recent outsourcing decision, Dingolfing will produce the majority of the 5 Series. In 2015, BMW sold over 347,000 units of this model.

The 5 Series will become only the second BMW model to be made by Magna, after the X3 between 2003 and 2010. However, the contract manufacturer also produces the Mini Countryman and Mini Paceman for the Group.